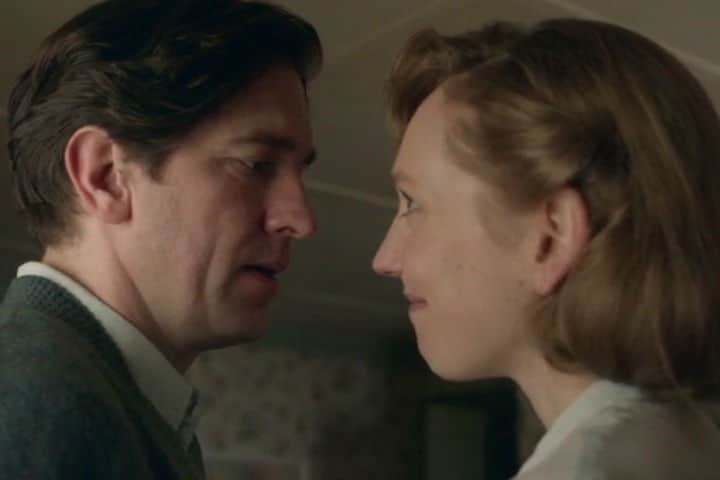 My Mother and Other Strangers TV Miniseries Review

Prior to watching My Mother and Other Strangers, I had no particular affection for it. Not because I expected anything “bad” to result, but rather because I knew very little about it. Call it trepidation or some sort of disinterest, whatever emotion I attach it’s this that caused a delay in my seeing this.

The narration of an older Francis Coyne (Ciarán Hinds) opens the story (and each installment). He tells of a letter he found in his mother’s possessions, a letter addressed to his elder sister. This brings him back to 1943 where a young Francis lives in Moybeg Ireland. As the war rages, their small community remains unscathed. The one reminder of this is the presence of American soldiers, stationed at a base near their home.

The Coyne home is a happy one. Led by Francis’ father Michael (Owen McDonnell), a native of Northern Ireland, there’s his elder sister, Emma (Eileen O’Higgins), and the baby of the family, Kate. Then there’s his mother, Rose (Hattie Morahan). Rose isn’t Irish. In fact, in many ways, she’s a stranger to these lands and a curiosity among the Moybeg people. Born in England, she’s a woman with sensibilities who tries to teach her children proper manners and grammar. Still, seventeen years ago, Rose followed Michael to this place, and though her life is nothing like she expected, she’s content.

And then everything changes when, a chance encounter with the dashing American, Captain Dreyfuss (Aaron Stanton), changes Rose. 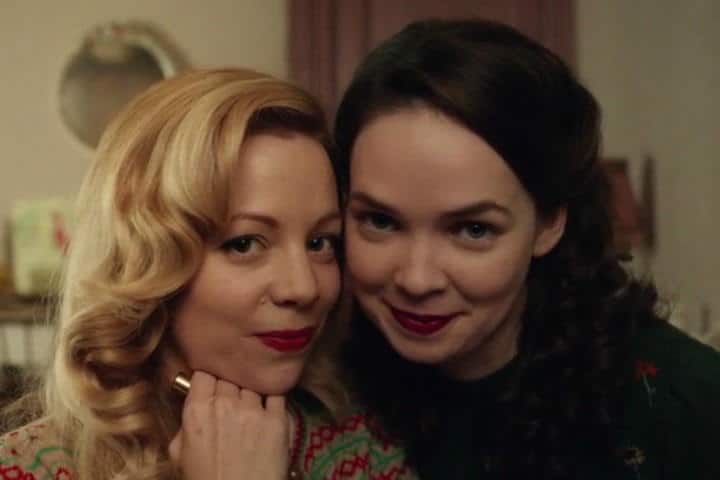 Regardless of the implications, My Mother and Other Strangers is really a story about lost dreams. In no way does it resemble the ordinary suggestions of its “love triangle” teaser. Instead of tawdry behavior, the script is an intelligent look at questions of anguish and morals. All of which questions the possibilities of “What if?”

This drama is quite possibly the best surprise I’ve seen from the genre this year. Whether it’s the haunting score or the panoramic landscape scenes, the viewer is easily swept up in this story. The sense of “place” and filming is so breathtaking it becomes a feeling that transports us to Moybeg. More evocative still are the Irish shores where Rose walks along the cliffs.

Written specifically for Hattie Morahan, this 5-part miniseries suits her beautifully. She portrays the right emotions of this conflicted character; a woman ingrained with a strong sense of right vs wrong. Like Sense and Sensibility, as Rose, Morahan seems to grasp the deep emotional connection she needs to make with the audience. 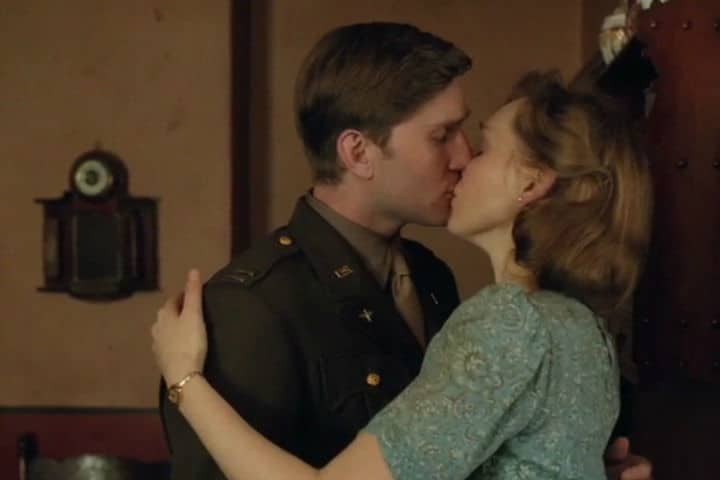 Although there’s no official word, there is a rumor of a possible follow up. The ending surprises me in unexpected ways. It’s bittersweet and touching, indicative of the warring emotions leading up to its final act. With exception to the direction of one episode (episode five opts for a few too many close ups), this is beautiful. Though it might not provoke the same reactions in most enthusiasts as Poldark, the quiet, sincere nature of the piece is riveting. Overall, My Mother and Other Strangers is a memorable period piece that would be a delight to see return.

Content: There’s very little content. Some fisticuffs break out; one man is beaten up, another man abuses his wife (off screen). There is also some minor innuendo and questions about extra-marital affairs.

Where to Watch: My Mother and Other Strangers is available on Amazon Video, on DVD or you can stream it on Masterpiece Theatre’s website.

Our romance-themed entertainment site is on a mission to help you find the best period dramas, romance movies, TV shows, and books. Other topics include Jane Austen, Classic Hollywood, TV Couples, Fairy Tales, Romantic Living, Romanticism, and more. We’re damsels not in distress fighting for the all-new optimistic Romantic Revolution. Join us and subscribe. For more information, see our About, Old-Fashioned Romance 101, Modern Romanticism 101, and Romantic Living 101.
Pin this article to read later! And make sure to follow us on Pinterest.
By Rissi JC on August 21st, 2017