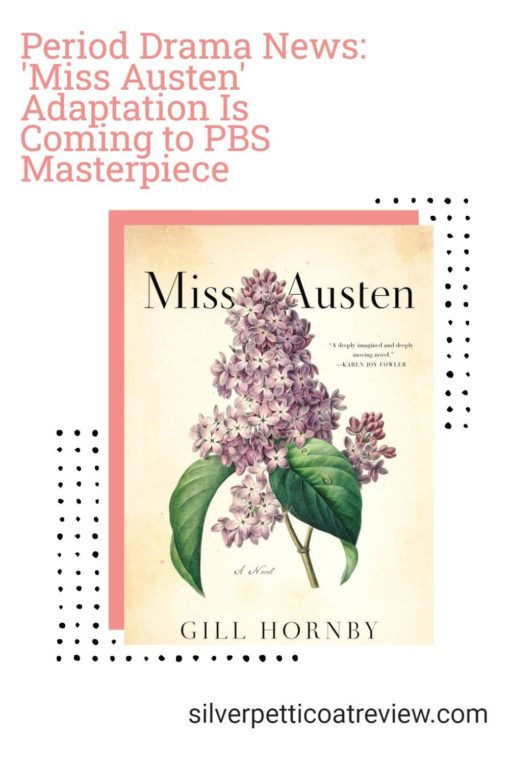 PBS will adapt the acclaimed book as a four-part limited miniseries.

WHAT IS MISS AUSTEN ABOUT?

Miss Austen is a deeply emotional novel about Jane’s sister, Cassandra Austen, as she reminisces about her sister Jane after her passing. This book theorizes (and very convincingly so) why Cassandra burned most of Jane’s letters.

Besides the unbreakable bond between sisters, the novel also has some romance.

Here is the official synopsis:

For fans of Jo Baker’s Longbourn, a witty, wonderfully original novel about Cassandra Austen and her famous sister, Jane.

Whoever looked at an elderly lady and saw the young heroine she once was?

England, 1840. Two decades after the death of her beloved sister, Jane, Cassandra Austen returns to the village of Kintbury and the home of her family friends, the Fowles. In a dusty corner of the vicarage, there is a cache of Jane’s letters that Cassandra is desperate to find. Dodging her hostess and a meddlesome housemaid, Cassandra eventually hunts down the letters and confronts the secrets they hold, secrets not only about Jane but about Cassandra herself. Will Cassandra bare the most private details of her life to the world, or commit her sister’s legacy to the flames?

Moving back and forth between the vicarage and Cassandra’s vibrant memories of her years with Jane, interwoven with Jane’s brilliantly reimagined lost letters, Miss Austen is the untold story of the most important person in Jane’s life. With extraordinary empathy, emotional complexity, and wit, Gill Hornby finally gives Cassandra her due, bringing to life a woman as captivating as any Austen heroine.

If you’ve yet to read the excellent novel, I can tell you it’s been one of my favorite books recently. And I can’t recommend it enough! The research, the prose, the characters, everything is beautifully realized.

So, reading the novel is the best place to start if you want an idea of what to expect with this new period drama miniseries.

A snippet of my review of Miss Austen:

Gill Hornby creates a powerful historical fiction novel that will stay with you long after closing the final page. Moving back and forth between the older Cassandra and the young “Cassy,” is the story of Jane Austen’s beloved sister. We follow her heartbreaks, triumphs, and ultimately, her version of a happy ending.

Appealing and heartwarming, Miss Austen is a novel that is both thought-provoking and fun to read. Filled with humor, persuasive historical research, and imaginings, Cassandra Austen tells her story in a delightful, must-read novel for every Janeite and everyone who believes everyone has a story to tell and not just the young.

While there are compelling love stories within the pages, nothing is more powerful than the bond and love between women. And that’s what makes this story so memorable. It will make you re-think what it is to have a happily ever after.

You can read this review (and a few others) here.

MORE DETAILS ABOUT THE PBS ADAPTATION OF MISS AUSTEN

Andrea Gibb will write the miniseries. Her previous screenwriting credits include Dear Frankie, Swallows and Amazons, Call the Midwife, and Elizabeth is Missing.

RELATED: Jane and the Year Without a Summer: This New Book is a Lovely, Romantic Read

Masterpiece Executive Producer Susanne Simpson told PBS, “Miss Austen is about one of the most important people in Jane Austen’s life, her sister Cassandra.” And they “can’t wait to bring Gill Hornby’s captivating novel to life for our Masterpiece audience.”

Well, we can’t wait either! This adaptation is fantastic news.

Producer Christine Langan added more: “Gill’s instincts for these unforgettable characters is flawless… Her moving, revealing and often hilarious story of love, loss and sisterhood is captured brilliantly for the screen by Andrea Gibb. I share with Susanne at Masterpiece great excitement for the emotional impact, the warmth and the deep pleasure this show will bring.”

As for Gill Hornby, she’s “thrilled Miss Austen has landed with Christine and Masterpiece/PBS the dream team for the project.” She “can’t wait to see Jane and Cassandra back to life.”

The next question remains: who will they cast as these important historical figures? It’s time to start dream casting now!

This announcement comes at the perfect time since Gill Hornby’s next book, Godmersham Park (another book about Jane Austen), releases this week on June 23. You can read all the details about her new book from Simon & Schuster.

So, until the premiere of Miss Austen on PBS, enjoy Gill Hornby’s fabulous books. You may find yourself with a new favorite author.

Have you read Miss Austen by Gill Hornby? How do you feel about this new PBS adaptation of Miss Austen? Are you as excited as we are? Do you have the perfect cast in mind? Share your thoughts below.