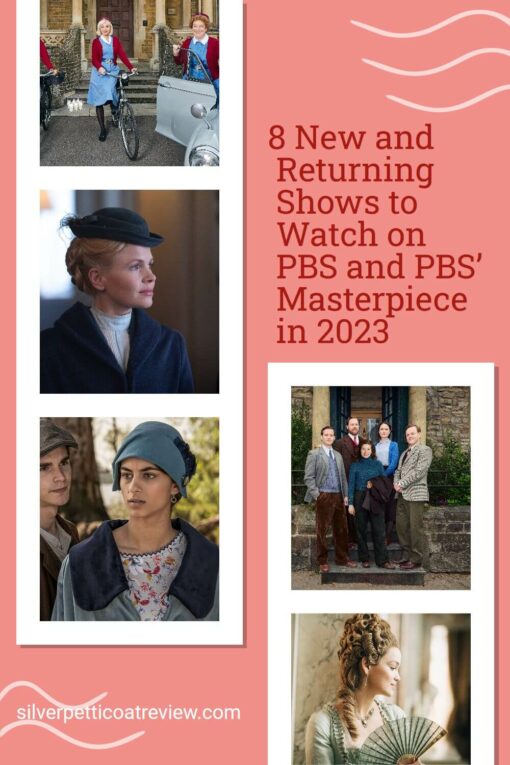 2023 is here, meaning the new PBS season is also here, with eight epic period dramas and mysteries to look forward to this Winter and Spring. From season 3 of Miss Scarlet and the Duke and All Creatures Great and Small, Call the Midwife, to the final season of Sanditon, PBS has exciting new seasons and brand-new period dramas coming soon.

According to a PBS press release, “PBS continues to bring dramas that appeal to the entire family, from mysteries like MISS SCARLET AND THE DUKE ON MASTERPIECE and VIENNA BLOOD to coming-of-age stories like SANDITON ON MASTERPIECE and LA OTRA MIRADA. This season’s lineup of period dramas is our most extensive to date, with hours of captivating storytelling from January to May,” says Maria Bruno Ruiz, Vice President of Program Scheduling at PBS.

“Not only do we have returning seasons of our most anticipated dramas, but we also have two new premieres that audiences are sure to fall in love with: TOM JONES ON MASTERPIECE and MARIE ANTOINETTE. Both bring incredible new talent to PBS. I can’t wait for audiences to watch!”

As an avid watcher of everything MASTERPIECE, this is one audience member who can’t wait to watch the new period dramas and other excellent returning dramas.

Will Miss Scarlet ever admit her feelings for Detective Inspector “Duke” Wellington? Will the wedding in All Creatures Great and Small go off without any obstacles?

And who will Charlotte end up with in Sanditon? Hopefully, all these questions will be answered and more in the latest seasons airing on MASTERPIECE and PBS.

In total, there are eight dramas with premiere dates below. I list them in airdate order, so all the other PBS aficionados know when to tune in!

All eight new and returning dramas will also be available to stream on the day of broadcast on PBS.org and the PBS app. You can also watch if you’re subscribed to PBS Passport.

WINTER/SPRING SCHEDULE: NEW AND RETURNING SHOWS ON PBS AND PBS’ MASTERPIECE IN 2023 TO WATCH

Season Two Official Synopsis: “Teresa returns to school after being found innocent of her father’s murder. Her struggles, though, are far from over, as she deals with new secrets and new threats to the Academy. From Walter Presents, in Spanish with English subtitles.”

Why You Should Tune In: Tune in if you like soapy Spanish period dramas!

MISS SCARLET AND THE DUKE SEASON 3 ON MASTERPIECE

Season 3 Official Synopsis: “Eliza finds herself in fresh and surprising mysteries, ranging from a disappearing magician to police corruption, as she struggles to build her detective agency.

Growing competition from a rival agency creates new problems, and all the while she is still juggling her relationship with Inspector William Wellington, the Duke. But she has a new challenge on that front: a beautiful woman from her childhood has caught the Duke’s eye.”

Why You Should Tune In: As a PBS Passport subscriber, I’ve already watched season three of Miss Scarlet and the Duke, and it is just as good as previous seasons.

While the mysteries are great, tune in for the slow build romance between the main leads. The chemistry is top-notch, and the character development is fantastic.

ALL CREATURES GREAT AND SMALL SEASON 3 ON MASTERPIECE

Season 3 Official Synopsis: “James Herriot and crew deal with sick animals, eccentric farmers, courtship and strict government mandates in a new season of the series that won the hearts of millions of fans.

Change is the order of the day as professional and emotional relationships mature in the rural Yorkshire veterinary practice immortalized by author James Herriot’s charming stories.

Themes for Season 3 include new partnerships, ghosts from the past and doing one’s duty—and, of course, doing right by the animals.”

Why You Should Tune In: For the wedding, of course! But also for the laughs, the characters, and the drama. Most importantly, All Creatures Great and Small is a heartwarming period drama that makes you feel good.

Set in 1900s Vienna — a hotbed of philosophy, science and art, where cultures clash and ideas collide in the city’s grand cafes and opera houses.

Season 3 finds Max and Oskar once again thrust into the dark underbelly of glittering Viennese society, with episodes set in a luxury fashion house, the Chinese antiquities trade and the budding world of cinema.”

Why You Should Tune In: What I love about this period mystery is the 1900s Vienna setting! So, watch for the culture and atmosphere but stay for new intriguing mysteries.

Season 12 Official Synopsis: “It’s 1968, and the nuns and nurses from Nonnatus House return for more midwifery and family life. The midwives welcome a new nun, Sister Veronica, and tension in Poplar arises following the effects of Enoch Powell’s “Rivers of Blood” speech.”

Why You Should Tune In: After 12 seasons, Call the Midwife still consistently puts out quality entertainment year after year. And I can’t wait to see what Nonnatus House is up to next! It’s one of our favorite shows – and likely a favorite of many other loyal viewers.

Season 3 Official Synopsis: “The third and final season returns viewers to the seaside resort of Sanditon for the conclusion of Charlotte and Georgiana’s stories. Drama, laughter and romance are all in store for the ensemble of new and returning characters.”

Why You Should Tune In: I plan to tune in for the show’s much-deserved ending! Who will Charlotte end up with at the end?

I’m okay if she ends up with none of the men from last season and Stringer returns for a surprise ending. Dreams aside, Sanditon fans rallied together for closure, and that’s what the final season will bring.

I look forward to romance and laughter in this underrated period drama series.

When she arrives at Versailles, she must obey the numerous and complex rules of the French court. The princess quickly suffers from not being able to live her life the way she wants, while her mother, the Empress of Austria, (Tony nominee Marthe Keller) keeps pushing her to continue the Bourbon line and thus secure the alliance between the two countries.

However, faced with Louis’ avoidant and solitary character, the mission turns out to be more complicated than expected.”

Why You Should Tune In: Marie Antoinette is a fascinating person from history. I’m curious to see how this new period drama tells her story.

Thankfully, everything about this production thus far promises a high-quality series. Not to mention gorgeous costume design. Here’s to hoping it delivers!

Official Synopsis: “One of the greatest novels in the English language comes to MASTERPIECE in a four-part adaptation of Henry Fielding’s Tom Jones, giving a new twist to the tale of a young man’s love for a wealthy heiress.

Solly McLeod stars as Tom, with Sophie Wilde as Sophia, the heroine and Hannah Waddingham as the iconic temptress Lady Bellaston.

The stellar cast also includes James Fleet, Shirley Henderson, Alun Armstrong, Pearl Mackie, and a torrent of other talent, bringing mid-18th-century England to life in all its passion and prejudice, luxury and loose morals.”

Why You Should Tune In: MASTERPIECE excels at sharing excellent adaptations of classic novels. With a phenomenal cast and written by Gwyneth Hughes (Vanity Fair, Miss Austen Regrets), Tom Jones has the potential to be an epic new romantic period drama to watch again and again!

Watch the above preview for a sneak peek at some new and returning period dramas. Fans of romantic period dramas are in for some swoony moments!

What new and returning shows on PBS do you plan to watch? Do you have a favorite or a new one you’re thrilled about this year? Let us know in the comments below.