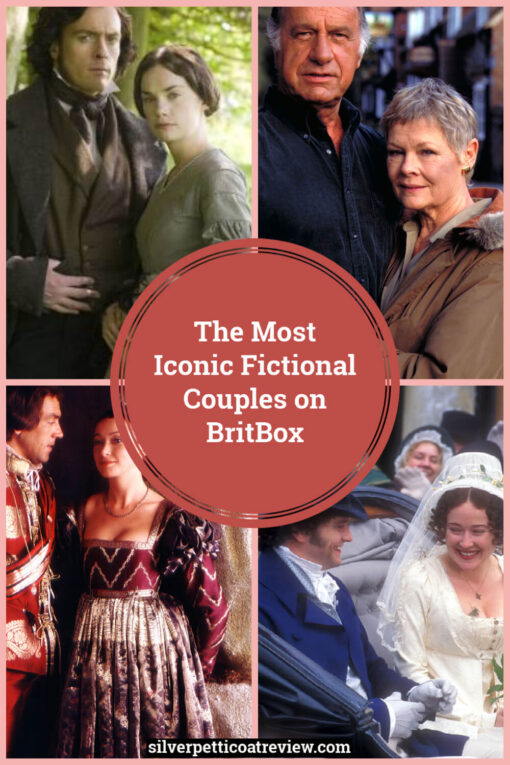 In celebration of the 25th anniversary of BBC’s Pride and Prejudice, we’ve compiled a list of iconic couples on BritBox, including Elizabeth Bennet and Mr. Darcy, of course. Plus, you’ll want to watch BritBox’s exclusive new trailer for the newly remastered edition of Pride and Prejudice (now available to stream as of September 25th).

In honor of the 25th anniversary of BBC’s Pride and Prejudice (1995) and due to the new release of its newly remastered edition in 4k on BritBox, we thought it would fun to compile a list of a few iconic British TV couples with a particular focus on Elizabeth and Darcy.

Without the 1995 adaptation with Colin Firth and Jennifer Ehle, the Austenmania explosion of the ‘90s may have never happened. It led to numerous more Austen adaptations, a surge of Jane Austen in pop culture, and the rise of the period drama. Now, that’s an alternate history we would never want to see!

For this list, we’ve included seven epic romantic couples from terrific love stories. So, if you love classic romance or quintessential British drama and comedy, you’ll appreciate these seven iconic couples on BritBox (many of the romantic pairs are from classic novels). And if you haven’t seen these romantic dramas or romantic comedies yet, now is the perfect time to give BritBox a try and check them out.

BritBox Synopsis: Celebrate the 25th anniversary of this award-winning adaptation of Jane Austen’s timeless Regency romance, broadcast for the first time in 4K. This classic story of love and class centers on the strong-minded Elizabeth Bennett, who matches wits with the wealthy, conceited Mr. Darcy.

Why They Are Iconic: You can’t get much more iconic than Jane Austen and her fictional sparring couple, Elizabeth and Darcy, not to mention the unforgettable scene of Colin Firth in a wet t-shirt.

Jane Austen sparked a movement with Pride and Prejudice and influenced future love stories. As far as adaptations go, the 1995 adaptation is the gold standard. Now, with the new edition restored in 4K, you can enjoy it in a whole new way!

Watch the official trailer for the remastered edition below:

Why They Are Iconic: If gothic romance and romanticism is more your style, Charlotte Bronte’s story of the independent Jane and the Byronic Rochester is as good and iconic as it gets. Jane Eyre is one of the greatest love stories of all time with a Beauty and the Beast influence and is sure to capture your interest.

The 2006 adaptation starring Ruth Wilson and Toby Stephens is often considered the best version to date. (Although we also highly recommend the 1983 adaptation with Timothy Dalton.) Jane and Rochester are an iconic fictional couple that went on to influence future gothic and paranormal romances.

Why They Are Iconic: This is another Jane Austen adaptation and popular among Janeites. Romola Garai and Jonny Lee Miller (two period drama darlings) star as Emma and Mr. Knightley, two of the most beloved Jane Austen characters. As a miniseries, the excellent adaptation has plenty of time to explore Austen’s iconic novel.

BritBox Synopsis: Shakespeare’s comedic play about love, misunderstandings, and deception. Friends plot to bring the bickering Benedick and Beatrice together, while the wicked Don John plots to ruin the marriage between Hero and Claudio.

Why They Are Iconic: Much Ado About Nothing is one of Shakespeare’s funniest plays. It is also one of the most romantic. Beatrice and Benedick are the precursor rom-com couple, and this theatrical adaptation is fantastic!

BritBox Synopsis: Physician and poet Yury Zhivago wrestles with his intense love for two women during the Russian Revolution. Kiera Knightley & Sam Neill star in this stunning adaptation of the heartbreaking love story.

Why They Are Iconic: While this adaptation is not as famous as the 1965 Hollywood film, it faithfully tells Yury and Lara’s iconic love story and includes an all-star British cast.

Why They Are Iconic: Loki and The Doctor in a period romance? Yeah, that is a love story you won’t want to miss! Cranford is a series based on Elizabeth Gaskell’s novellas, and the British production is period drama perfection!

What is your favorite iconic couple on BritBox? Are you going to watch the remastered edition of Pride and Prejudice in 4k? Let me know in the comments below!

4 thoughts on “7 of the Most Iconic Couples on BritBox”