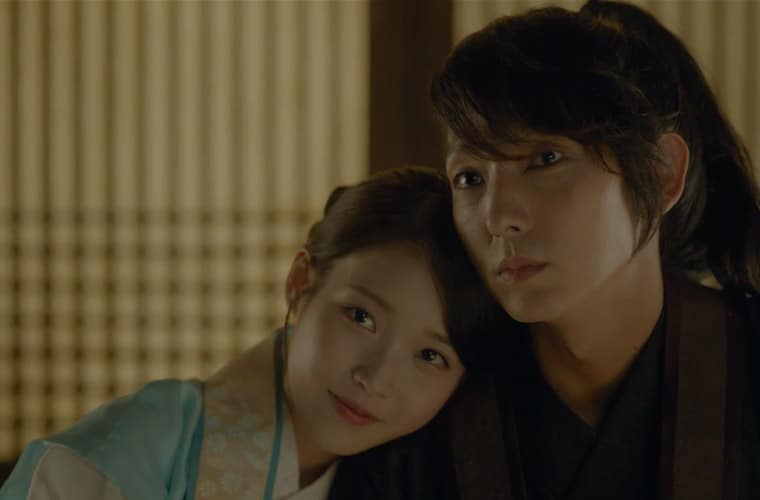 Grab your tissues, friends! This episode will hit you in the feels with heartbreak and the courageous power of love amidst the darkness. Read on for all the tears and epicness!

4th Prince learns from Princes Yeon-Hwa that Hae-Soo was hiding 10th Prince. Meanwhile, 10th Prince and his wife, Soon-Deok, fight for their lives against the evil king’s guards. A guard injures Soon-Deok. 10th Prince begs the evil king, who’s watching from afar, to spare him. Aren’t they brothers, after all? But the king watches silently. 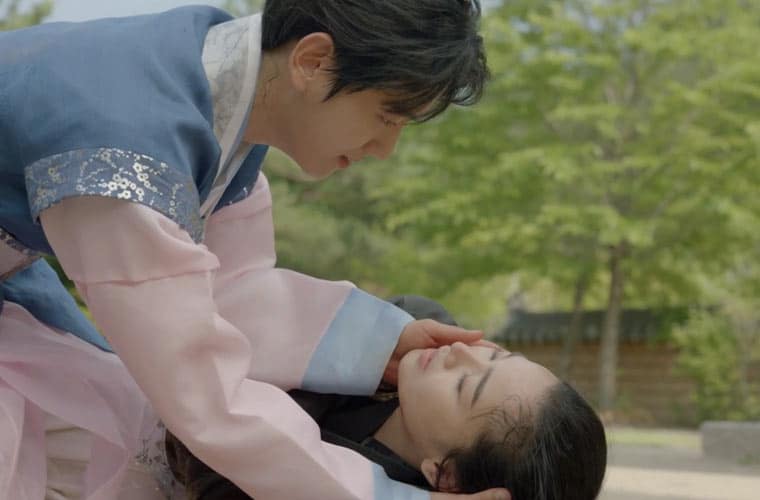 A guard attacks 10th Prince and Soon-Deok takes the fatal blow in his place. 10th Prince begs her not to leave him as she dies. Just then 4th Prince rushes in and fights off the guards. The evil king takes things into his own hands and shoots an arrow which hits 10th Prince in the arm – and then another which lodges in his chest. 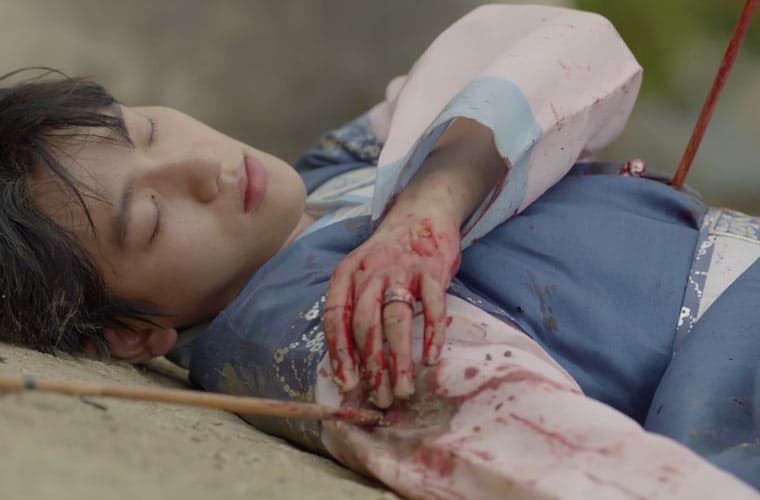 14th Prince and Hae-Soo watch this ensue as they’ve been physically held back by the guards. 10th Prince reminds 4th Prince of his birthday where he promised to give him anything. 4th Prince struggles emotionally with what he knows 10th Prince is asking. Finally, he puts his brother to rest by fatally slicing him with his sword.

After grieving over 10th Prince and Soon-Deok, Hae-Soo meets with 4th Prince. She’s concerned for him knowing the painful choice he made to kill 10th Prince. But 4th Prince accuses her of not trusting him and blames her for 10th Prince’s death. He says he doesn’t love her anymore.

The evil king rewards 4th Prince for killing 10th Prince by sending him to oversee a new palace being built. When the evil king is alone, though, he becomes disturbed after hearing the cries of his brother begging him to spare him.

In a flashback, we learn that 4th Prince made a pact with Ji-Mong, the palace astrologer, his brother 13th Prince, and Soon-Deok’s father, a general, to take the throne. The general tells 4th Prince he must throw everything away for the throne (thus clarifying why he abandoned Hae-Soo).

Two years later, 14th Prince returns from war. He has a strong dislike for 4th Prince, still blaming him for 10th Prince’s death. Meanwhile, the evil king slowly becomes more insane. 9th Prince, still besties with the evil king, goads him into attacking Hae-Soo to see if the 4th Prince still likes her (since everyone knows they parted badly and haven’t been in contact for two years). 9th Prince reasons that they could use Hae-Soo to make 4th Prince speed up the process of building the new palace. The evil king shoots an arrow at Hae-Soo, which 4th Prince intercepts, injuring himself in the arm.

Hae-Soo sneaks out of the palace with 13th Prince’s help to check on 4th Prince. The evil king promises to reward 14th Prince for his victories on the battlefield. He asks the king for something he’s wanted for a long time…

Hae-Soo finds 4th Prince unconscious and tends to his wound. When he awakes, she confronts him about her feelings for him. She admits that she does trust him though it took her awhile to get to that place. She begs him to be honest with her; does he really not love her? He responds by kissing her deeply. 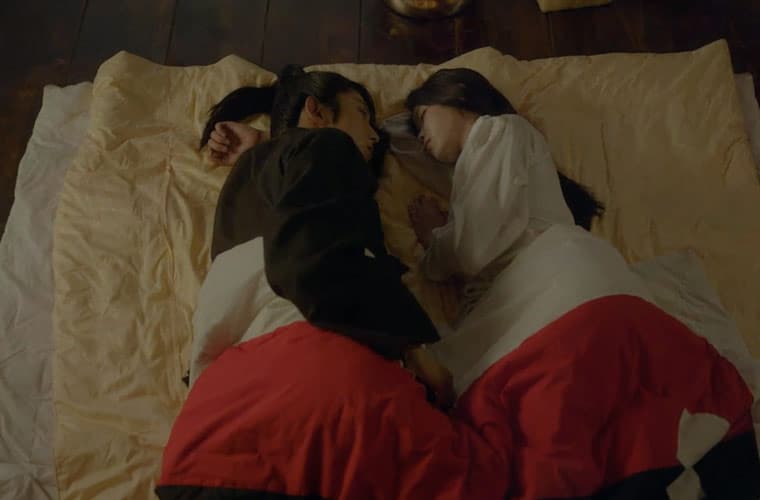 They spend the next few days happily sleeping beside each other, eating together, and star-gazing at night. Their time together is cut short when Ji-Mong visits and tells 4th Prince of the king’s illness, urging him to attack the palace now.

Hae-Soo asks if 4th Prince is after the throne and if that’s why he threw her aside. He admits yes and promises to convince her to see his way about taking the throne. She asks him to leave with her. He tells her that the only way to stop the royal family from slaughtering each other is for him to take the throne.

Just an FYI, there was only one episode this week because a baseball game in South Korea went overtime, thus canceling the episode on Monday.

Since I knew that 10th Prince and Soon-Deok’s death was coming, I convinced myself I wouldn’t feel too much during their final scene. Nice try, right? It was impossible not to be moved by their passing, as the scene was full of so much emotion and heartbreak. 10th Prince’s character has always seemed the most innocent and naïve, along with his precious wife Soon-Deok. Which made it only more heartrending to see them so unfairly killed by the evil king, all for corruption and power. Everything from Soon-Deok and 10th Prince fighting together, to him crying over her body until finally, he persuaded 4th Prince to kill him – was just heartrending. 4th Prince’s tears and pained, crazy laughter of disbelief after he killed 10th Prince was chilling and agonizing. I felt like Hae-Soo at that moment: with tear-glazed eyes watching the scene unfold.

How fascinating that this is the interpretation of Hae-Soo’s visions – not 4th Prince as a monster slaughtering his brothers, but literally forced to do the unthinkable! I’ve often wondered what was the source of her visions. They remind me a lot of the visions in Revenge of the Sith that helped lead Anakin Skywalker to the dark side – a reminder that the future cannot be foolishly or willfully interpreted. If Hae-Soo had trusted 4th Prince and told him where 10th Prince was, it is possible she might’ve been able to stop their deaths. That is unless the future was so fated that the visions were inevitable and would’ve taken place no matter what she did. Like Hae-Soo, we’ll probably never know.

Though the last few minutes with Hae-Soo and 4th Prince were brief compared to the rest of the episode, I really loved the quiet, sweet moments between them and the happy smiles they shared, particularly Hae-Soo. It’s been awhile since she’s looked so happy while being in love (she’s had quite her share of angst with 8th and 4th Prince) and it was so beautiful to see.

I can’t believe that 14th Prince asked the king for something “he’s long wanted”!! I mean what else could it be but Hae-Soo! They’ve been close since she saved him five years ago from murderous thieves. I was surprised, and a little irked, that he didn’t tell Hae-Soo that he liked her before he asked the evil king for her. I mean, c’mon, 14th Prince – she might say no. I’m sure he’s not going to be happy when he learns that she’s in love with 4th Prince, the brother he never got along with especially after 10th Prince’s death.

I guess Hae-Soo can’t escape the love triangles just yet! Or is it a love square? Since I can only assume that 8th Prince is still hoping to eventually be with Hae-Soo also. Life gets complicated when you’re a court lady surrounded by so many young and amorous princes.

What did you think about Scarlet Heart Ryeo Episode 16? Anyone else heartbroken over 10th Prince and Soon-Deok’s tragic deaths? Sound off below…

Our romance-themed entertainment site is on a mission to help you find the best period dramas, romance movies, TV shows, and books. Other topics include Jane Austen, Classic Hollywood, TV Couples, Fairy Tales, Romantic Living, Romanticism, and more. We’re damsels not in distress fighting for the all-new optimistic Romantic Revolution. Join us and subscribe. For more information, see our About, Old-Fashioned Romance 101, Modern Romanticism 101, and Romantic Living 101.
Pin this article to read later! And make sure to follow us on Pinterest.
By Faith White on October 20th, 2016