4th Prince is emerging as the front-runner for Hae-Soo’s heart and it’s about time! Buckle up because the next two episodes are jam packed with emotion, smiles, and gut-wrenching tears.

After the kiss, 4th Prince looks regretful but doesn’t know what to say. Instead, he takes Hae-Soo out of the palace to the ocean where he admits his feelings for her. Hae-Soo tells him she’s in love with someone else, but 4th Prince isn’t deterred. 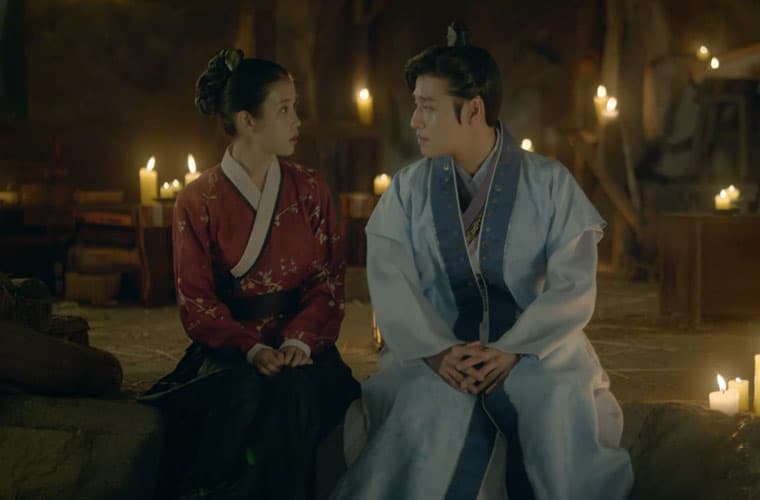 8th Prince is upset after learning that 4th Prince took Hae-Soo out of the palace. 8th Prince finally decides to take action. He tells Hae-Soo that he’s going to get the king’s permission for them to marry and leave the palace forever. Court Lady Oh, the mother-figure in Hae-Soo’s life who works with her in the palace, warns Hae-Soo about falling for a prince. She wants Hae-Soo to leave with her instead, but Hae-Soo believes in 8th Prince’s promise.

8th Prince tells his mom and sister of his plan to marry Hae-Soo. Yeon-Hwa is pissed that he’s abandoning the chance for the throne for a girl. 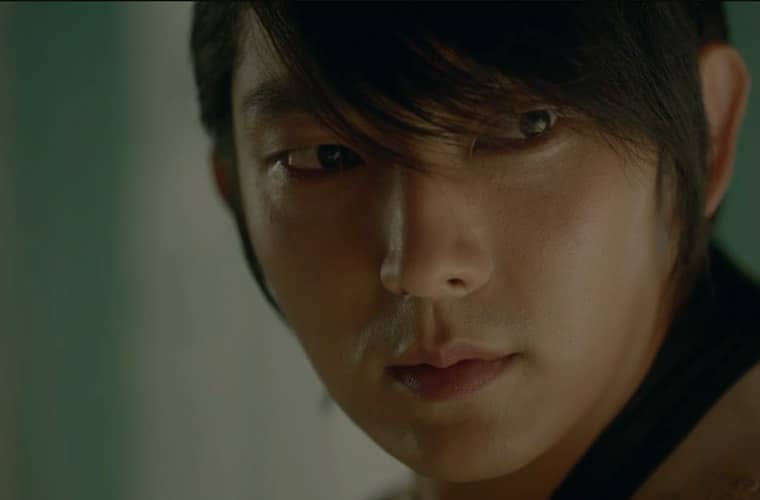 Meanwhile, Queen Yoo shocks her own son, 4th Prince, when she reveals her plan to poison the Crown Prince and put him on the throne. He threatens to tell but Queen Yoo reminds him that the king will still feel like 4th Prince is too involved and will exile him from the palace.

4th Prince struggles with what to do about the poison. When he sees that Hae-Soo is serving the poisoned tea, he drinks it in his brother’s place and tries to walk out before anyone realizes what’s happened.

Despite 4th Prince’s efforts, he collapses and Hae-Soo is imprisoned for treason. 8th Prince swears to Hae-Soo that he will get her out. Despite being tortured, Hae-Soo is concerned for 4th Prince’s health when he visits her. 8th Prince discovers that his sister was also involved in the poisoning. Yeon-Hwa warns him that she will be executed, their mother exiled, and his chance for the throne destroyed if he reveals the truth. 8th Prince, infuriated, kills the only other witness to Yeon-Hwa’s evil plan, a court maid. He has just chosen his family – and the throne – over Hae-Soo. 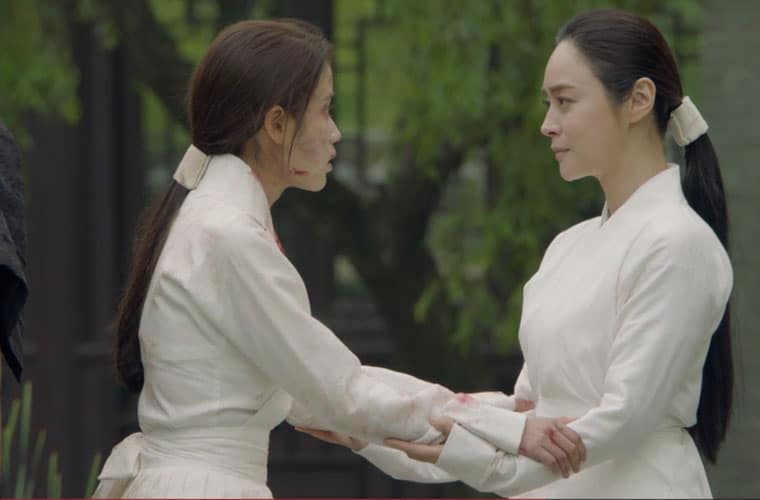 4th Prince fights off the palace guards at Hae-Soo’s execution in a last attempt to save her. A messenger interrupts to reveal that Hae-Soo is spared; Court Lady Oh confessed to poisoning the Crown Prince. Hae-Soo confronts her friend, knowing that she lied to save her life. Sobbing, Hae-Soo begs her to run away. Court Lady Oh comforts Hae-Soo – she’s happy to protect the girl who has become her daughter.

Still bruised and bloodied from the torture, Hae-Soo kneels before the king’s residence pleading for him to spare innocent Court Lady Oh’s life and find the real killer. She is the only voice speaking out for justice. Everyone else is afraid of incurring king’s wrath by questioning his judgment. Two days go by and she doesn’t move. Moved by her courage, 14th Prince, 13th Prince, and the Crown Prince kneel with her in the rain. 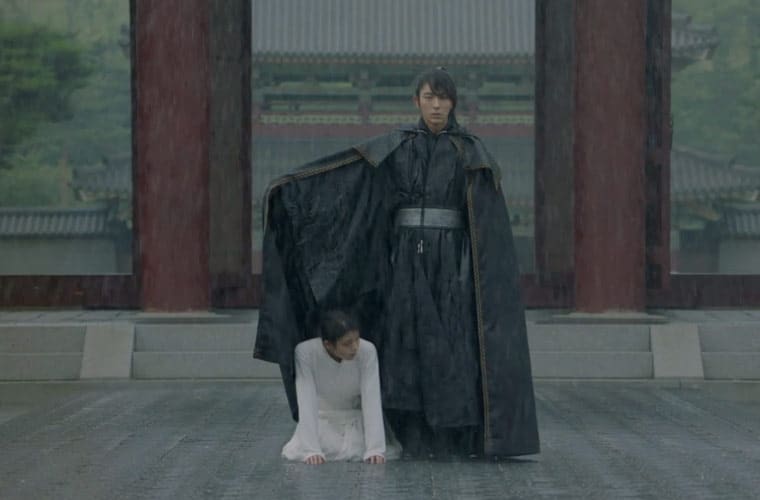 Hae-Soo sees 8th Prince approach as well. But he hesitates. And walks away not wanting to face the king’s wrath. Just as her strength is fading, someone stands beside her. Hae-Soo sits up as 4th Prince shields her from the rain with his cape. He stands with her. But despite their efforts, Court Lady Oh is executed.

Wow, I didn’t expect 8th Prince and Hae-Soo falling apart this early on! I have no problem with it, as I knew it was coming and like to see the story moving at a brisk exciting pace. I might be in the minority but I don’t see 8th Prince’s turn as a descent into pure evil. Rather it’s a much deeper and darkly fascinating look at a young prince’s difficult choice – the woman he loves or his family – and of course, the throne.

Though I found his decision disappointing, I don’t hate 8th Prince’s character for choosing family/position. But in doing so, he did utterly betray Hae-Soo and I don’t/won’t root for him with her anymore. He was the one keeping her in the palace, waiting for him (she could’ve escaped with Court Lady Oh or even 4th Prince, who easily could’ve taken her away), and he was the only hope that she had. Then he abandoned her, leaving her to face death and the worst pain possible as she lost her friend, Court Lady Oh. While 8th Prince was out ruining his romance with Hae-Soo, 4th Prince was stepping up his game. I was surprised when Hae-Soo admitted that she liked another and 4th Prince didn’t seem to care. He was coming on so strong, but then true to 4th Prince’s character he quietly revealed his true feelings – particularly to 13th Prince when he admitted that he didn’t know how to relate to people. It’s a nice touch of vulnerability that reminds us he’s aware of his shortcomings, even if he likes to come on full force with everyone around him.

His selfless side really shines in these two episodes – particularly in drinking the poison to protect his girl. I love how unlike the 8th Prince, he throws aside the king’s or anyone’s approval when it comes to defending those he loves. He fights for Hae-Soo both by arguing for her innocence and then literally fighting the guards. And finally, that beautiful moment when he covers her from the rain and faces the king’s possible wrath for her sake. Swooning! Oh my word, that rain scene! My absolute favorite moment from the original Scarlet Heart was 4th Prince standing with Rouxi in the rain, shielding her with his cape. The scene was just as powerful and stunning here in the K-version!

14th and 13th Prince need some loving too as they faithfully watch out for Hae-Soo as her besties. I was so happy to see them going out into the rain and kneeling in solidarity with her. Way to go princes!

Finally, Court Lady Oh’s arc was beautifully and gut-wrenchingly done. I loved seeing the connection between the mother-daughter duo, especially when Hae-Soo begged Court Lady Oh to escape with her. Hae-Soo’s strength despite torture, impending death, and facing the king’s wrath was also wonderfully done. Yes, she’s just a woman, a court maid, a commoner – and yet in her quietness and compassion, she shows more strength than the king or most of the royals ever have. It’s no wonder that the princes devotedly follow her around. I’m both excited and nervous about what awaits Hae-Soo around the corner, but I’m happy to know the 4th, 13th and 14th Princes will be there with her.

Let me know your thoughts and feelings on Scarlet Heart Ryeo Episode 8 & 9! What do you think about the latest episodes of this K-Drama?

Our romance-themed entertainment site is on a mission to help you find the best period dramas, romance movies, TV shows, and books. Other topics include Jane Austen, Classic Hollywood, TV Couples, Fairy Tales, Romantic Living, Romanticism, and more. We’re damsels not in distress fighting for the all-new optimistic Romantic Revolution. Join us and subscribe. For more information, see our About, Old-Fashioned Romance 101, Modern Romanticism 101, and Romantic Living 101.
Pin this article to read later! And make sure to follow us on Pinterest.
By Faith White on September 29th, 2016