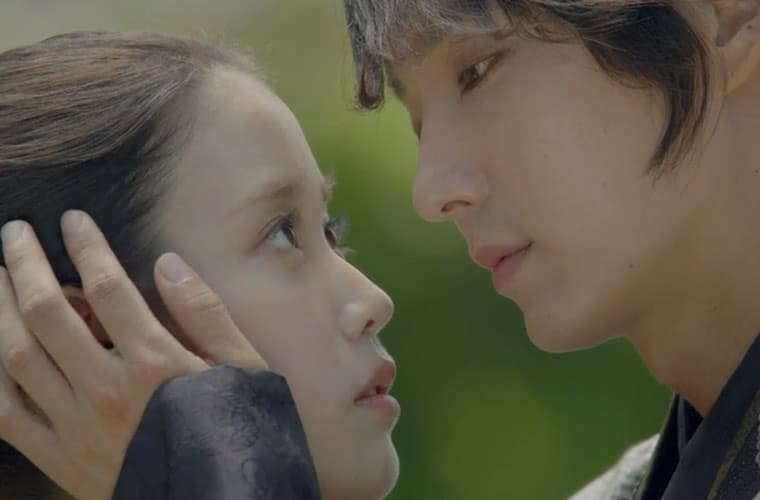 Yes!! Hae-Soo finally opens up her heart to 4th Prince – just as their fight for survival in the palace becomes even more deadly and twisted.

Two years later, Hae-Soo is now the head Court Lady at the Damiwon. Her former maidservant Chae-Ryung works with her. Unbeknownst to Hae-Soo, Chae-Ryung has been manipulated by 8th and 9th Prince to slowly poison the king (formerly Crown Prince Wang Moo) over time. 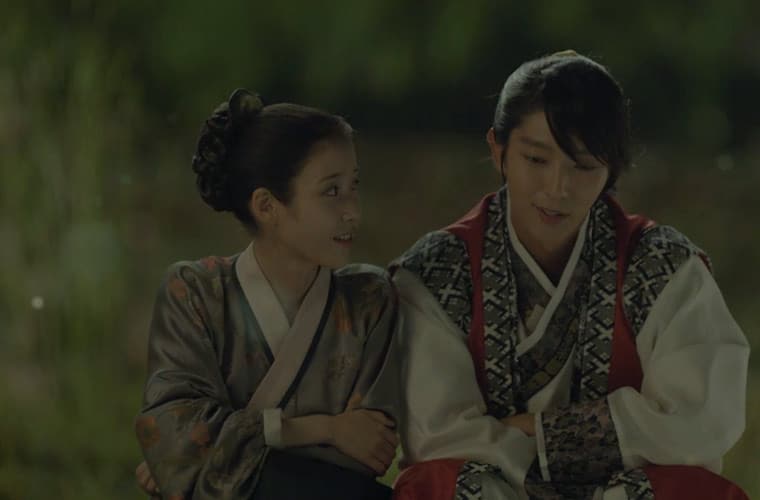 In an adorable scene, 4th Prince and Hae-Soo watch the stars for her birthday. He tries to sneak a little kiss but she avoids him. Meanwhile, 8th Prince advises the very ill king to abdicate to him. The king, who is bordering on insanity, orders his young daughter to marry the Khitan, a foreign lord and ignores her distressed cries at being sent away. Horrified, 4th Prince asks the king to not send her away to be a hostage. The king asks if 4th Prince will marry his daughter instead and protect the royal family.

Hae-Soo learns about the marriage and is upset. 4th Prince apologizes to her for failing to carry out his promise to get her out of the palace. They walk away in silence.

The king reveals his plan to abdicate as soon as he makes 4th Prince his son-in-law. Meanwhile, 14th Prince is shocked to find that 3rd Prince survived falling off the cliff! 14th Prince returns to the palace but has to sneak in because he’s past curfew. 4th Prince is on guard duty and spies him sneaking in. Hae-Soo hides him in her room and refuses anyone entrance. She uses her position to keep the guards and 4th Prince out of her room – if they enter, she swears to kill herself over the shame of a man (aside from the king) entering a court lady’s room.

The next day, 4th Prince angrily demands to know if it was 14th Prince in Hae-Soo’s room. She instead asks him to be honest with her – why did he marry the young princess? Does he want the throne? He reveals that he did it to save his niece from a horrible childhood like his own. The marriage is merely political and he sent the princess to a safe temple to live. But he knows that Hae-Soo hates polygamy so he felt like he failed her. Moved by his honesty, she admits that she hid 14th Prince. When he confesses that he loves her, Hae-Soo replies with a kiss.

Soon, 3rd Prince finally attacks the palace and kills the sickly king. He threatens 4th Prince – either he serves him or Hae-Soo dies as a traitor who poisoned the king. 4th Prince grits his teeth and bows to 3rd Prince, the new king.

3rd Prince, now king, immediately gets to work eliminating his brothers who might potentially come after his throne. He accuses the 10th Prince’s family of treason and executes his relatives while 10th Prince and his wife, Soon-Duk, barely escape. The evil king orders 4th Prince to hunt and kill 10th Prince – or everyone he cares about will die. 10th Prince and Soon-Duk find Hae-Soo, who hides them in the Damiwon while they wait for a boat to arrive so they can escape. 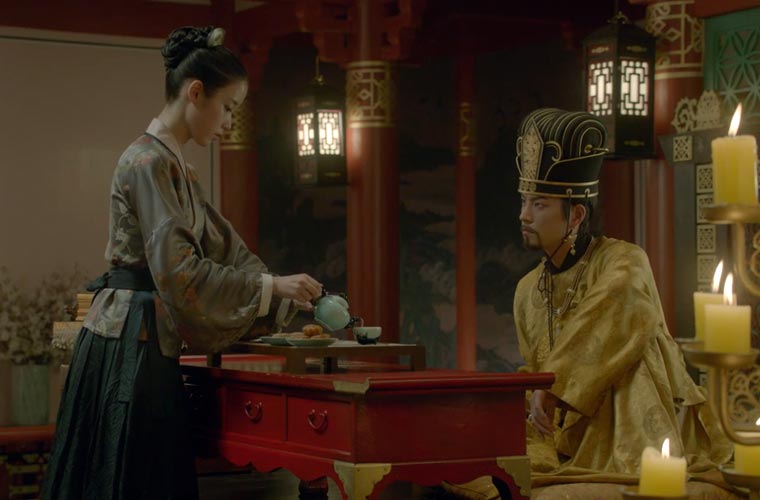 That night, Hae-Soo brings the evil king his tea. He taunts her with the truth that 8th Prince killed the Crown Prince. Hae-Soo asks 8th Prince if he did, but he denies it. He’s convinced himself that all his evil plans are the only way to have power and Hae-Soo.

Hae-Soo hasn’t told 4th Prince that she’s hiding 10th Prince, fearing the visions she’s had. But Soon-Duk challenges Hae-Soo about not trusting him – after all, she loves him, doesn’t she? Hae-Soo realizes that Soon-Duk is right; 4th Prince has never betrayed her trust. 14th Prince helps 10th Prince and Soon-Duk in their attempt to escape and secretly admits that he likes Hae-Soo.

Princess Yeon-Hwa is upset when the evil king tells her to marry the Khitan. The night before their escape, 10th Prince and his wife finally kiss. To save herself from marrying the Khitan, Yeon-Hwa blabs about 10th Prince’s whereabouts after having deduced that he’s hiding in the Damiwon. The guards surround the court maids’ residence. Sook-Duk tells her husband to escape while she holds the guards back. Hae-Soo begs him to run away but he refuses to leave Soon-Duk to die alone. 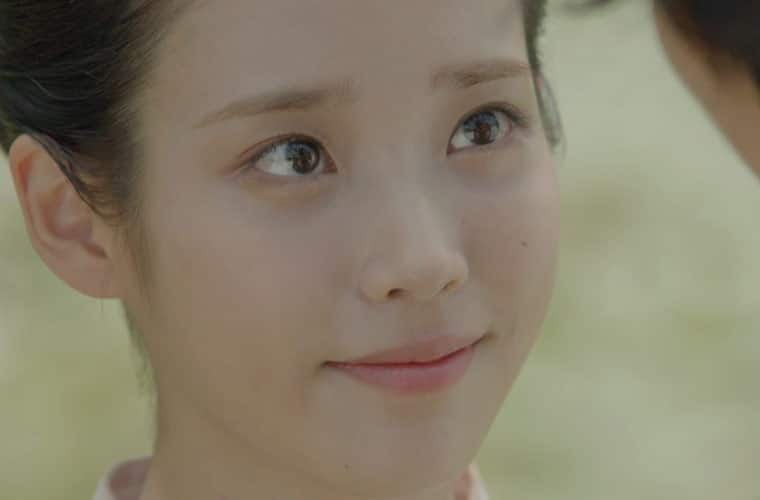 Yes!! Hae-Soo’s back! After all the angst, how wonderful is it to see her really open up her heart to 4th Prince like this? I definitely understood where we were taking Hae-Soo’s character for a while, what with her frightening visions, losing her friend and mother-figure Court Lady Oh, and then 8th Prince’s betrayal. She was burdened and wearied from all the chaos around her.

Though she’s not as wide-eyed innocent or carefree as she was in the past, her smile is back along with a new backbone forged through the fire she’s been through. I loved how she protected 14th Prince, not giving the guards or 4th Prince an inch. Or when she served the evil king tea and told him if he tried to threaten her with possible torture/death with the lie that she poisoned the king, she would confess that he was the one who made her poison the king.

Oh my word, the romance! We’ve only been waiting 15 episodes for this! It’s amazing what a healthy dose of openness and trust will do for a relationship. My favorite scene totally went to Hae-Soo and 4th Prince finally hashing it out and being completely honest with each other. It was cute to see 4th Prince thinking that 14th Prince was the guy she mentioned loving before (also funny that he hasn’t figured out that it was 8th Prince yet) and how she quickly told him she didn’t like 14th Prince that way. He also got points for deeply respecting Hae-Soo’s revulsion to polygamy. He was clearly upset that he couldn’t find a way to save the princess and the king without getting in a marriage. Finally, his confession to loving her – and her kiss – so perfect!

Intriguingly, 8th Prince has descended fully and quite comfortably into the role of a villain. I wasn’t expecting him to go full force baddie, though I’m not shocked either. It’s still hard to dislike his character just because he’s so fascinating onscreen. His obsession with seeming righteous on the outside makes him different than his brother 3rd Prince (now the evil king), who has no issue with being seen as the evil usurper.

I’ve really enjoyed the subplots of late especially the insane king. It was chilling to watch him scream at his daughter to protect the royal family by marrying the Khitan. Thankfully, his advisors and 4th Prince intervened, chiding the king for doing this to his daughter when she’s just a child. Despite his insane behavior, the king’s death was surprisingly heartbreaking. And then watching the evil king (3rd Prince) force 4th Prince into becoming his dog, or animal to do his bidding, was just nerve-racking. We’ve yet to see how far 4th Prince will be forced to serve him but it’s not looking good since Hae-Soo and 13th Prince’s lives are on the line.

With only 5 episodes left, we’ve finally reached homestretch. The story is falling into place and I’m both intrigued and saddened to know the end of several characters is quickly approaching. 10th Prince and his wife’s final moments together were sweet and precious, making it only more tragic knowing that they’re probably not going to make it in the next episode. I only hope Hae-Soo can handle this tragic blow because she still believes that somehow she can change the future and save them from their heart-rending deaths. I don’t want her to carry the burden of failing them when she’s done everything she can to protect them. Be strong, Hae-Soo!

What did you think about Scarlet Heart Ryeo Episode 14 and 15? Did you love that Hae-Soo finally kissed 4th Prince? Sound off below…

Our romance-themed entertainment site is on a mission to help you find the best period dramas, romance movies, TV shows, and books. Other topics include Jane Austen, Classic Hollywood, TV Couples, Fairy Tales, Romantic Living, Romanticism, and more. We’re damsels not in distress fighting for the all-new optimistic Romantic Revolution. Join us and subscribe. For more information, see our About, Old-Fashioned Romance 101, Modern Romanticism 101, and Romantic Living 101.
Pin this article to read later! And make sure to follow us on Pinterest.
By Faith White on October 13th, 2016