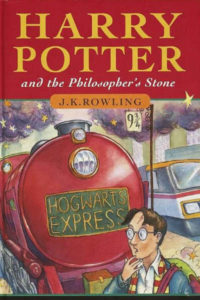 I first met Harry Potter in the summer of 1999. A trilogy of Harry Potter books was given to me that summer by a dear friend of mine, when I stayed with her family in Norfolk, England. Entranced from the get-go, I never looked back. I have dutifully pre-ordered every subsequent installment, rereading all the previous books before the next sequel was due. So, yeah, I have read and reread these books many, many times during the past 18 years.

And this year, two decades after its initial publication, I had the pleasure of sharing Harry Potter and the Philosopher’s Stone (aka Harry Potter and the Sorcerer’s Stone) with my own son, who is now tearing through the series, loving it. Although he does wonder sometimes why Harry does never seem to have a quiet year at Hogwarts.

Love as powerful as your mother’s for you leaves its own mark. Not a scar, no visible sign … to have been loved so deeply, even though the person who loved us is gone, will give us some protection for ever. It is in your very skin.

Harry Potter: The Boy Who Lived

Harry Potter is an orphan, friendless, living with his fuddy-duddy relatives, the Dursleys, who treat him very poorly, very poorly indeed. His aunt and uncle spoil extravagantly their son Dudley, with Harry only getting scraps of Dudley’s broken leftovers. Harry has no recollection of his parents. He’s got a strange lightning-shaped scar on his forehead. And sometimes weird things occur in his presence, inexplicable things, which inevitably enrage his guardians. And then one day, nearing his eleventh birthday, Harry gets a letter that changes his life forever.

You see, Harry Potter, unbeknownst to even himself, is a wizard, a very famous wizard, renowned for banishing, possibly killing, the evil sorcerer Lord Voldemort a decade ago. It’s a feat of which he has no recollection, but it has made him a celebrity in the wizarding world. And there is a wizarding world, a world of magic hidden to the Muggle world (the non-magical realm, which is to say this reviewer’s reality), and the whole magical world opens its doors to Harry with that letter. He is to start at Hogwarts School of Witchcraft and Wizardry. He is to learn magic, make friends, fly on broomsticks, become a wizard.

Fear of a name increases fear of the thing itself.

Thus, begins the education of Harry Potter at Hogwarts. The magical realm is, well, magical, with many fantastic realities, animals, candies, creatures, music. At school, he is befriended by a ginger-haired Ron Weasley, who stems from a large family and feels generally unremarkable and overlooked. Hermione Granger, a goody-two-shoes know-it-all, daughter of non-magical dentists, eventually becomes a friend. This little trio ends up on an adventure to protect the philosopher’s stone – a stone that grants immortality – from the evil that is seeking it.

I won’t say any more.

The truth – it is a beautiful and terrible thing, and should therefore be treated with great caution.

A Modern-Day Classic for Good Reason

Harry Potter and the Philosopher’s Stone – and the world it introduced and the series it ignited and the movies it inspired – is a modern-day classic and for good reason. It’s riveting and relatable and fun and funny. J.K. Rowling’s writing is vivid and evocative, with many great characters, fantastic descriptions of the fantastical, not to mention many beautiful, thoughtful and quoteworthy passages on love and truth, on evil and goodness. In this, her first book, readers often compare her to Roald Dahl, which is certainly not a bad thing.

RELATED: From Jane Eyre to Harry Potter: 75 of the Greatest Books Written By Women

Harry Potter and the Philosopher’s Stone is a beautiful book and still a fresh, engaging read twenty years on. And I suspect that it will continue to find new readers in the decades to come.

So butterbeers up and cheers to Harry Potter and J.K. Rowling for twenty years of magic!

RELATED: Harry Potter and the Cursed Child – A Nostalgic Trip Back to Hogwarts

Content Note: There are some thrillingly intense scenes, but nothing decidedly disturbing or inappropriate for the young (or older!) reader.

Adaptation Recommendation: The films completed to huge success. First released in 2001, the last film in this eight-film series came out a decade later in 2011. The young actors playing our adventuresome trio, Daniel Radcliffe (Harry), Rupert Grint (Ron) and Emma Watson (Hermione), aged with their characters, became superstars and teen idols, and have since moved on and grown into other things. The series has been hugely successful, and a return to the magical wizarding realm has begun with a spin-off prequel, penned by J.K. Rowling, Fantastic Beasts and Where to Find Them. It is the first in a new five-film series, which hit theatres last year.

RELATED: Are Prequels Necessary? On the Value of Prequels

Where to Read: Harry Potter and the Philosopher’s (Sorcerer’s) Stone is available for sale at bookstores near you or on Amazon

Our romance-themed entertainment site is on a mission to help you find the best period dramas, romance movies, TV shows, and books. Other topics include Jane Austen, Classic Hollywood, TV Couples, Fairy Tales, Romantic Living, Romanticism, and more. We’re damsels not in distress fighting for the all-new optimistic Romantic Revolution. Join us and subscribe. For more information, see our About, Old-Fashioned Romance 101, Modern Romanticism 101, and Romantic Living 101.
Pin this article to read later! And make sure to follow us on Pinterest.
By Jessica Jørgensen on October 9th, 2017

2 thoughts on “Harry Potter and the Philosopher’s Stone: 20 Years of the Boy Who Lived”