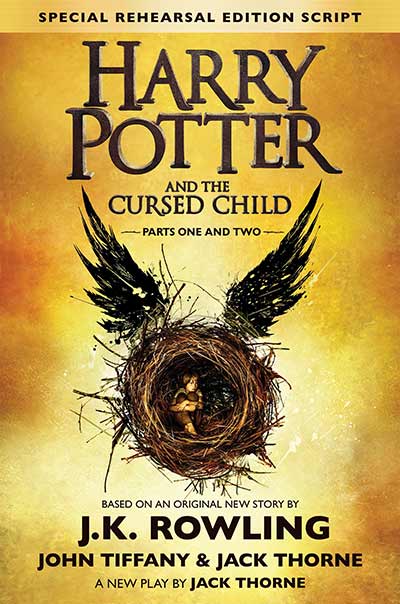 As a huge Harry Potter addict, I never thought there would be another book to look forward to. While I didn’t get into the Harry Potter swing of things until The Order of the Phoenix’s original release, I was basically hooked as soon as I allowed myself to join the craze. I haven’t looked back since. Whenever in a bit of an “I don’t know what to read bind,” I tend to turn to Harry Potter. There’s just something so magical within the pages of J.K. Rowling’s world of a young, orphan boy who learns he is a wizard. But could the new book, Harry Potter and the Cursed Child, written in play format live up to what had come before?

The answer is yes and no. While J.K. Rowling co-wrote the story to The Cursed Child (alongside John Tiffany & Jack Thorne), she didn’t, in fact, write the play. That credit goes to Jack Thorne. And for the most part, he succeeds in capturing the Rowling charm. Because of the format, however, much depends on performances, set design, special effects, etc. which results in some translation being lost on the page. Not everyone (as in most) will be able to experience the live version of Harry Potter and the Cursed Child and I think that’s a real travesty. That being said, if one can look within the pages and truly immerse yourselves into Harry Potter and the Cursed Child with just a touch of the imagination, then I truly believe the experience of reading this play will be a memorable one.

SOME SPOILERS (Read at your own peril)

Harry Potter and the Cursed Child starts years after Harry has defeated Voldemort. One of his sons, Albus, is ready to go to Hogwarts but he’s worried he’ll end up in Slytherin, which is, of course, exactly what ends up happening. Albus isn’t thrilled to be Harry Potter’s son, the boy who saved everyone from Voldemort. How can he live up to such an impossible standard? This resentment and Harry’s own failure to understand his son creates a father/son tension that becomes a cornerstone of the play.

Then there’s Albus’ friendship with Scorpius, Draco Malfoy’s son. How could Albus be friends with the son of a death eater? Not to mention, all the rumors that Scorpius is actually Voldemort’s son. Their friendship makes these two some of the least popular kids at Hogwarts. Neither fits in, even Rose Weasley-Granger (Hermione and Ron’s daughter), doesn’t want much to do with her cousin after the sorting hat.

Meanwhile, some of the dark ones who followed Voldemort are beginning to gather and Harry begins having frightening dreams about Voldemort. As head of Magical Law Enforcement and Hermione the Minister for Magic, things get even crazier when a Time Turner surfaces. Amos Diggory, Cedric’s father, gets wind of this and pleads with Harry to go back in time to save his son. Harry refuses, but Albus overhears this conversation, and with his friend Scorpius, decide to steal the Time Turner and save Cedric Diggory from his father’s mistakes.

It’s a choice with lethal consequences. Harry’s scar begins to burn for the first time in years and as Scorpius and Albus go back in time to the Triwizard Tournament, each trip to the past changes the present drastically, allowing for readers to see just what the world would have been like if Harry Potter had failed.

The premise behind The Cursed Child is a fascinating one because it not only brings the readers into alternate realities, the time travel allows readers to return to moments that made Harry Potter so fantastic in the first place. Several beloved characters make appearances such as Professor Snape. There’s a twist with his character that I absolutely loved.

The new characters are, for the most part, also memorable. The father/son relationship between Harry and Albus had depth and realness to their misunderstandings. That being said, Albus can get on your nerves with all his whining. Indeed, the true character stand out has to go to Scorpius. In my mind, he is the true hero of the book and I found his characterization to be both intriguing and compelling to read about. Scorpius also brought Draco to life in more ways than he has in the past. Draco was a joy to read about in the play.

As for the relationships, I believe Ron and Hermione fans will love The Cursed Child. Part of the time travel consequences has to do with these two which opens the door for more romance and tension between them. Their banter together continues to shine. As for Draco/Hermione fans, even you get a little wink in this one (at least on Draco’s end) which I thought was quite funny. Ginny and Harry, on the other hand, are fine as usual but not exactly anything that stands out romantically. The romances for the new generation are much less developed due to the time presented in one play. While Scorpius clearly has a thing for Rose (which I think would be all sorts of perfect down the road) and Albus has a crush on an older woman, I couldn’t help but wonder if Albus also has feelings for Scorpius beneath the surface. Maybe it’s just me (though I did find that the boys talked way too much about their feelings to actually be believable).

Overall, Harry Potter and the Cursed Child is a beautiful and nostalgic trip back to what made Harry Potter so magical in the first place: the characters. I loved seeing what some of my favorites were up to even if at times Jack Thorne didn’t get the voices exactly right. Dumbledore’s portrait, for instance, didn’t quite feel like Dumbledore. And without going too much into spoilers, I didn’t love what the writers did with Cedric Diggory either. Some of these choices will certainly upset several readers.

Still, this is a play that I would definitely recommend to hardcore Potter fans (who I’m sure will be disappointed like me when certain favorites don’t make an appearance). Having believed I would never again get to return to this world, I’m thrilled Rowling opened the door once more, and personally, I can’t wait to see Harry Potter and the Cursed Child on the stage.

What do you think about Harry Potter and the Cursed Child? Sound off below…

Featured image: The Cast of Harry Potter and the Cursed Child. Photo by Manuel Harlan/Palace Theater

Our romance-themed entertainment site is on a mission to help you find the best period dramas, romance movies, TV shows, and books. Other topics include Jane Austen, Classic Hollywood, TV Couples, Fairy Tales, Romantic Living, Romanticism, and more. We’re damsels not in distress fighting for the all-new optimistic Romantic Revolution. Join us and subscribe. For more information, see our About, Old-Fashioned Romance 101, Modern Romanticism 101, and Romantic Living 101.
Pin this article to read later! And make sure to follow us on Pinterest.
By Autumn Topping on August 1st, 2016