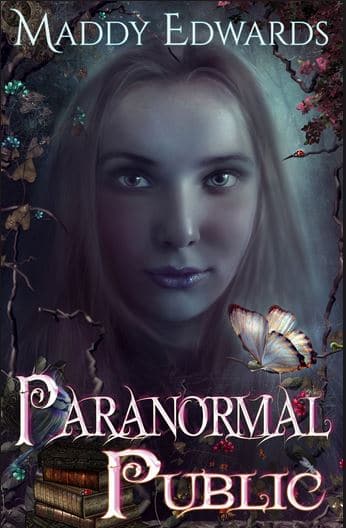 One minute Charlotte Rollins is a normal girl about to go to a normal college. She is at once excited and nervous, getting ready to start this new phase in her life. The next minute she is a freshman not at a normal college, but at Paranormal Public University, a school where paranormals of all kinds must co-exist. Charlotte must learn magic, that is, if she could actually do magic, which unlike every other mage at Public she can’t seem to manage.

Her transition to this new and wonderful world is difficult. On top of trying to learn magic, make new friends, and confront forbidden love, the archenemy of the paranormals, the demons, are getting stronger. They are looking for something. It turns out that Charlotte might just hold the key to finding it.

Can Charlotte get a handle on her powers in time to save the school she loves? Can she fulfill a destiny the paranormals scarcely dared to hope for? Or will she be too late?”

When it comes to Paranormal Public, comparisons to Harry Potter is inevitable. Despite the obvious resemblance with a magical school, Maddy Edwards seemed to be using Harry Potter and the Sorcerer’s Stone as a sort of outline. The most telling similarity is the Professor Snape-like character who hates Charlotte for a mysterious, inexplicable reason. He even becomes the character she most suspects of attacking students at the school.

The mirrored plots and characters don’t end there. There’s a magical sport (though not as developed as Quidditch), a horrible home life, school houses (the dorms based on your supernatural identity), and a climax not unlike the climax in the first Harry Potter book. Having said all this, I don’t necessarily think the comparisons are a bad thing. We need more “Harry Potter” like books out there. However, I do believe a little more separation from Rowling’s original universe would have strengthened Paranormal Public in the long run. The mystery would have been much tougher to work out for instance.

With all that being said, Paranormal Public has the potential to be a seriously addictive series. It is Harry Potter meets Vampire Academy and having loved both, I can assure you that book 1 in this paranormal romance series was a lot of fun. Sure, some moments are a little rushed, contrived and stilted (particularly in the first few chapters), but with a publishing house editor on board, Paranormal Public could become a major guilty pleasure for readers out there.

The romance between Charlotte and Keller (a fallen angel) definitely brings on the sparks in a Dimitri kind of forbidden way. Not only is Keller from a different paranormal group (they don’t mix romantically), but he’s also her tutor, so of course, sparks fly. While their relationship could have been developed to a richer degree, it’s an enjoyable ride that paranormal romance fans will likely appreciate.

Another aspect of the series I liked (having only read book 1 thus far) was Charlotte herself. Like Harry, she worked as our eyes into this secret, magical world. I found myself rooting for her to find her magical gift, and kept waiting and waiting for her to finally do magic. The anticipation definitely kept me turning the pages, eagerly wanting to see what happened next.

Overall, if you’re looking for a light and fun read with adventure, mystery, romance, and even a little Harry Potter magic, Paranormal Public is a good choice despite some of its flaws. Oh, and you can check it out for free on Amazon.

Our romance-themed entertainment site is on a mission to help you find the best period dramas, romance movies, TV shows, and books. Other topics include Jane Austen, Classic Hollywood, TV Couples, Fairy Tales, Romantic Living, Romanticism, and more. We’re damsels not in distress fighting for the all-new optimistic Romantic Revolution. Join us and subscribe. For more information, see our About, Old-Fashioned Romance 101, Modern Romanticism 101, and Romantic Living 101.
Pin this article to read later! And make sure to follow us on Pinterest.
By Autumn Topping on September 18th, 2015