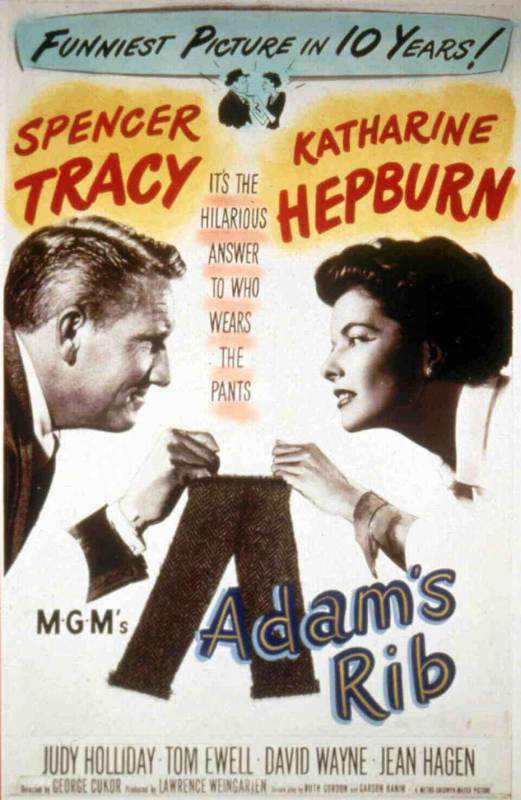 Adam’s Rib was the sixth M-G-M film in which Katharine Hepburn and Spencer Tracy teamed up. It was directed by George Cukor. The script was written by husband and wife team Garson Kanin and Ruth Gordon and was nominated for an Academy Award for best original screenplay.[1] Many years after the film was made and released, Kanin wrote an article about the film, saying that the story of Adam’s Rib was based on the lives of his wife’s friends, a husband and wife lawyer team who were on opposite sides of a divorce case and by the end of the proceedings, ended up splitting and marrying their clients.[2]

I watched this film for the first time for one of my college classes, Women in Film where we analyzed how women are portrayed in film, the male gaze, and various feminist principles and film theories. As a fan of Katharine Hepburn and Spencer Tracy when they work separately, and an even bigger fan of their work when they team up, I was highly anticipating this film and I enjoyed studying it very much. Since I enjoyed this film so much, I thought I would share my thoughts on this screwball comedy classic with others.

The film is about the happily married lawyer couple, Adam Bonner, a district attorney, and Amanda Bonner, a defense attorney. One day, a mother and housewife by the name of Doris Attinger follows her husband and attempts to murder him and his mistress. Amanda decides to represent Doris while Adam represents the cheating husband. Now the once happy couple must face off in court in a battle of the sexes. The double standards of society in regards to men and women and the definition of laws are raised as well as conflict between Adam and Amanda in and out of court.

The sheer premise of this film alone is enough to catch my interest and it is what made me want to watch the film through to the end, despite some absurd and improbable situations the characters find themselves in. Undoubtedly, a story like this is filled with conflict of interest and would have been utterly inappropriate in real life. However, this does not make the film any less entertaining and I personally was able to suspend disbelief in order to find out what would happen. If a film is successful in doing that, unless it is purposefully reminding the audience they are watching a film, it is successful in keeping me engaged.

The cinematography of the film is very stagey, with long, uninterrupted scenes and an immobile camera. I theorize Cukor does this to allow the actors to fill the frame with energy, no matter the kind. Such a style choice works in the film’s favor, in my eyes, as it allows the witty dialogue exchanges and skillful acting to shine through. The chemistry between Katharine Hepburn and Spencer Tracy never ceases to amaze me. Their compatibility and familiarity with each other is shown in every throwaway line, lifted eyebrow or smile.

The other actors in this film also gave wonderful performances. Judy Holliday plays the stubborn bimbo Doris Attinger with her blank looks and New Yorkisms, all make her funny and sympathetic. Tom Ewell plays Warren Attinger who is uncouth but still entertaining. David Wayne gleefully plays a piano player and songwriter named Kip, who pens a dedication song to Amanda entitled “Farewell Amanda.” Clarence Kolb plays the judge for the Attinger case and his facial expressions and bewilderment are wonderful to witness.

The characters are all entertaining and nicely fleshed out. Most of them I found quite likable, even when I found myself disagreeing with a few of them. Doris Attinger may not be the smartest wife around but she is the primary caretaker of her children and it is obvious she cares for them very much and wants what is best for them like any good mother would. She is in a position of waiting for her husband to return home as he does not spend much of his time there. She is not only cheated on by her husband but is also beaten. The audience is made to sympathize with her and her pitiful woes. In my case, it worked and I soon found myself not wanting her to go to jail.

Warren Attinger brings in the money for the family and spends much of his time away from his family and, as a result, is not very close to his children. In his world view, it is his right as a man and the head of the house do whatever he wants, including adultery, live wherever he wants and the wife should keep quiet. After he is shot by his wife, he is adamant about putting her in jail and claims she is crazy.

Adam and Amanda Bonner, in sharp contrast, are very happy and loving as well as non-traditional. They are both successful lawyers and have no children. Amanda is intelligent, confident, determined and bold. She is an outspoken advocate for women’s rights. Her successful career is one that is traditionally associated with men and, as she is private practice, makes more money than her husband. One could make the argument that Amanda puts all her energy into her career at the cost of her home life, as evident in the escalating fights she has with her husband as the Attinger case continues. However, she is not deterred by conflict in her marriage to Adam. In fact, she takes the Attinger case only after she knows her husband took it. An interesting note about her character is that she has historical relevance to when the film was first released. Adam’s Rib was released in 1949, four years after the end of World War II. There was an economic boom for everyone in the country and this allowed for shifts in power and people were accepting the visibility of more women in the workforce and having a career.

Adam is much more conservative when compared to his wife. This is illustrated in how he dresses and carries himself. He is intelligent and good at his job. Though he makes less money than his wife, he has little desire to change positions. He works hard to keep Amanda happy. He also does not like conflict and wants to avoid it with his wife whenever possible. He is aware of her radical point of view and knows her well. Similar to Amanda, he throws himself in his work, costing him the once tranquil environment of his home life. It is not until the case is near its end when Adam reveals his views on societal gender roles are much more traditional than Amanda’s which, of course, results in even more conflict between them.

I really enjoyed the romance and relationship between Adam and Amanda. One of the things I like most about it is how they are equals in their marriage. This is illustrated nicely in a scene at the beginning of the film when they are having breakfast and both have newspapers. It is obvious they love each other very much and have been together for many, many years.

Adam’s Rib uses the comedy of remarriage to great effect. For anyone unaware, comedies of remarriage are not about a couple getting together but rather about a couple that either grows up together or grows apart and they must get back together again. This may appear to be a kind of frivolous entertainment, but some could argue they help with reaffirmation, that even when a married couple is strained, it is still possible for them to be together again.

The plot-line may be simple but it is that simplicity which allows the film to explore feminist principles (which were daring and radical during the time of the film’s release), archetypal male vs. female issues, and an examination of sex-role stereotyping. Amanda decides to defend Doris because she knows that if the roles were reversed, if the husband attempted to murder his cheating wife and her lover, then he would not face criminal charges. I appreciate what the film was addressing as these are things that many women must deal with all over the world and, to some extent, even to this day.

For instance, many women face the societal double standard that if a man is sexually promiscuous then he is praised for his actions but if a woman were to do those same things, she is shamed. Sex-role stereotyping is not only addressed with Amanda and her position but also in a scene in the courtroom when Amanda brings a few women to the stand to illustrate her point of female equality. She brings women such as a female chemist and a woman foreman whose male employees seem to never have any complaints about their superior being a woman. My only real issue with the writing of the film is how its message of female equality becomes quite fuzzy and wondering as the movie plays out. I will not say too much more because doing so would be giving out spoilers.

Adam’s Rib is an enjoyable and entertaining screwball comedy with plenty of laughs, likable characters and some powerful feminist themes and messages that are important and still ring true for some. I highly recommended it, especially if one enjoys performances from Katharine Hepburn and Spencer Tracy. If it sounds like a movie you are interested in then give it a watch and find out for yourself.

Our romance-themed entertainment site is on a mission to help you find the best period dramas, romance movies, TV shows, and books. Other topics include Jane Austen, Classic Hollywood, TV Couples, Fairy Tales, Romantic Living, Romanticism, and more. We’re damsels not in distress fighting for the all-new optimistic Romantic Revolution. Join us and subscribe. For more information, see our About, Old-Fashioned Romance 101, Modern Romanticism 101, and Romantic Living 101.
Pin this article to read later! And make sure to follow us on Pinterest.
By Moriah Burbank on September 20th, 2015