By mid-2000, the age of the romantic comedy was fading fast, leaving only the nostalgia of a glorious time gone by. Two Weeks Notice was one of Hugh Grant’s last forays into the genre, although Sandra Bullock still had The Proposal up her sleeve as her biggest rom-com hit. On-screen together, I couldn’t help but feel like I was watching some version of romcom royalty go about their business.

You Make Gandhi Look Like A Used Cars Salesman 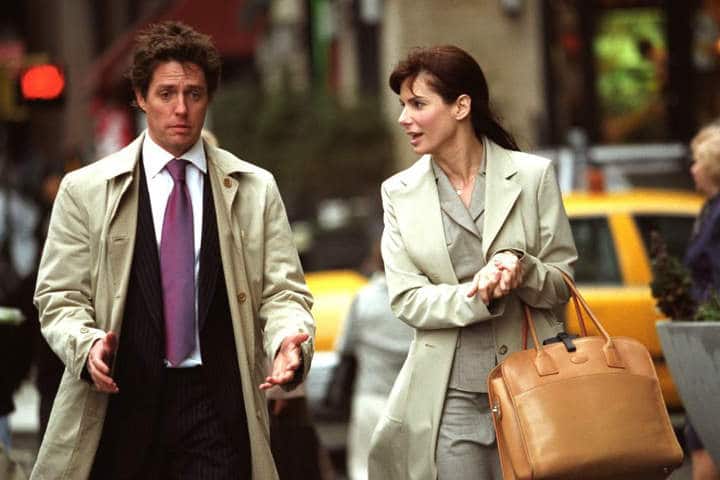 Two Weeks Notice starts with Lucy Kelson (Sandra Bullock) a Harvard educated lawyer who is passionate about the environment and her community. She is most likely the definition of a do-gooder or a tree hugger. Anti corporations, Lucy is a lone crusader for causes she feels passionate about. These usually include trying to stop the demolition of old buildings that have meaning to the communities that live around it.

In an effort to save her local community center, Lucy studies and then confronts George Wade (Hugh Grant), a wealthy, spoilt millionaire who cares little for anything except the bottom line. Perhaps that’s not quite true though. Yes, he isn’t particularly altruistic, but George is also just the figurehead of his families company due to his handsome looks and charming personality. His brother Howard (David Haig) is really the man pulling all the strings behind the scenes.

George, a notorious womanizer, realizes that Lucy is smart. Seeing as he was forced to fire his previous less than competent legal counsel, he hires Lucy in exchange for saving her precious community center. Despite her reservations, Lucy agrees and quite rapidly, becomes George’s right-hand woman.

All too soon, however, the lines between their personal and professional lives blur and in an attempt at self-preservation, Lucy offers George her two weeks notice. She promises to help him find a replacement before disappearing from his life forever. Initially, this doesn’t sound like a bad plan. But George realizes he actually enjoys her counsel and her company. And Lucy realizes that perhaps her feelings run deeper than she had anticipated. Can George and Lucy navigate the complexities of business and pleasure?

I Find You… Annoying 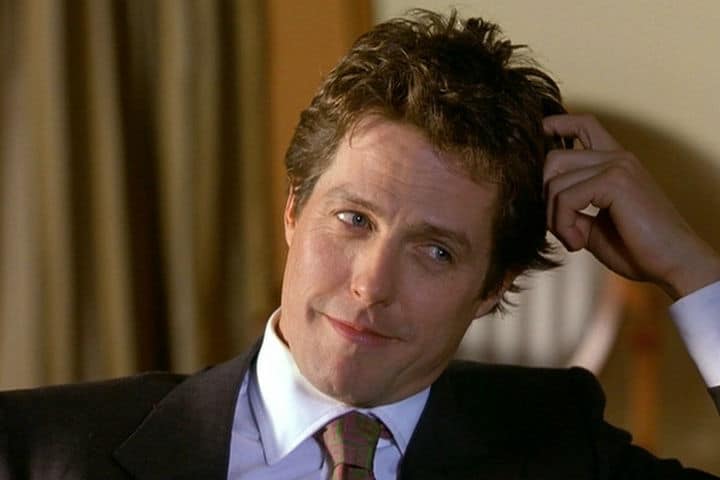 I’m a huge, huge fan of Hugh Grant’s. It’s true that he basically plays the same character in every romantic comedy. However, it continues to be the most charming sight to behold. George doesn’t take himself very seriously and is generally a teenager in an adult’s body. As you can imagine, Hugh Grant plays this type of character to perfection. He’s funny, self-deprecating and incredibly charming. He’s also annoying and selfish, while simultaneously showing bouts of kindness. Hugh Grant is playing Hugh Grant. But as I said, I’m certainly not complaining.

I have an ulcer, I don’t sleep well, mostly because you keep calling me in the middle of the night, and if you don’t call me I dream that you’re gonna call me. I think about you in the shower…not in a good way, but in an I’m-so-distracted-I-can’t-remember-if-I-washed-my-hair kinda way – so I’ll wash my hair twice!

Sandra Bullock, however, is an incredibly graceful and funny actress. She has great comedic timing and I really like her in romantic comedies. There are moments where it seems like Hugh and Sandra are laughing in scenes that don’t quite seem scripted. And I realize I enjoy the idea of these two having fun in real life, and seeing it translate so well on screen.

They have an easy, natural chemistry that’s dare I say… comforting? It’s true, their spark isn’t creating a snap!crackle!pop! of fiery chemistry, but their dynamic still works in its understated way. Alongside the romcom royals, Alicia Witt, Dana Ivey, and Robert Klein also star as the third wheel in a love triangle and Lucy’s parents respectively. 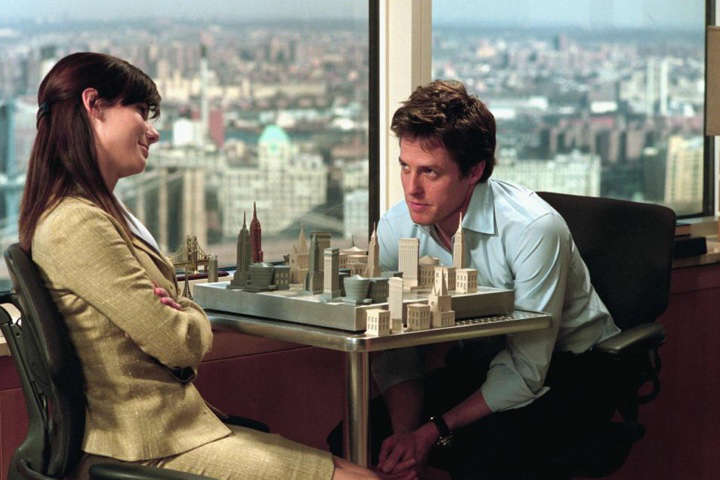 Two Weeks Notice is not the best example of a romcom out there. Even among Hugh Grant’s offerings, there are funnier, more romantic films in his portfolio – Notting Hill, Four Weddings and a Funeral and of course Love Actually (although that’s a large ensemble of course). Two Weeks Notice lacks some depth and although George is handsome and charming, he isn’t very interesting. I would have loved to get to know George as more than just the carefree lothario, which might have made his position at the top of a multi-million dollar company more plausible.

This person, despite being unusually stubborn and unwilling to compromise and a very poor dresser, is… she’s rather like the building she loves so much. A little rough around the edges but, when you look closely, absolutely beautiful. And the only one of her kind.

Sandra Bullock also oscillates between dowdy hippy, straight-laced corporate and cute girl next door which is a little confusing. It’s as if the wardrobe department was trying to tell a story through her costuming, but didn’t quite know where to put the stake in the sand. Having said that, Sandra Bullock is so gorgeous, it really doesn’t matter what she’s wearing. Like Hugh Grant, she is affable and therefore generally a joy to watch.

From a storytelling perspective, Two Weeks Notice is pretty light on the overall romance. While George and Lucy verbally spar with each other, their attraction is generally sparked by the “transformation” scene quite late in the film. I believe this movie would have benefitted by ramping up the romantic tension between the characters sooner.

Actually, This Is For Two 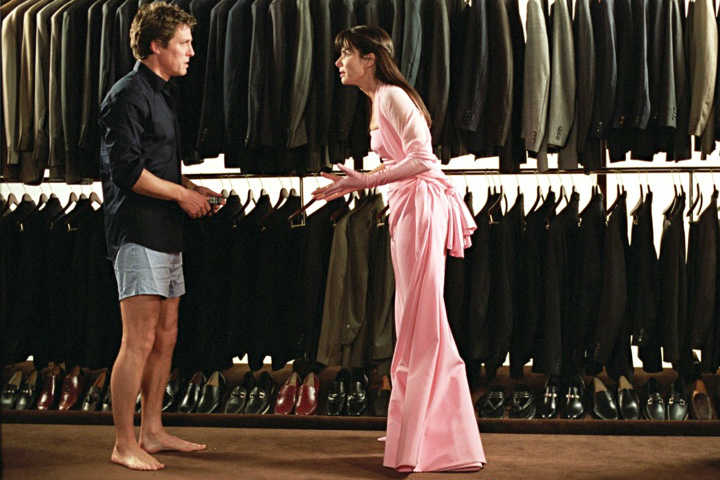 Overall, Two Weeks Notice is not the best romcom out there, but it has its moments. Hugh Grant and Sandra Bullock are funny, charming and go a long way towards making this a worthwhile watch. Also, Hugh Grant knows how to deliver a romantic monologue. Two Weeks Notice gives him that opportunity and he certainly doesn’t squander the opportunity!

Where to Watch: Two Weeks Notice is available for sale or to watch on Amazon. It can also be streamed on Netflix US and Amazon Prime.

Have you watched Two Weeks Notice? Is it one of your favourite Hugh Grant romantic comedies? Comment below and let me know!

Our romance-themed entertainment site is on a mission to help you find the best period dramas, romance movies, TV shows, and books. Other topics include Jane Austen, Classic Hollywood, TV Couples, Fairy Tales, Romantic Living, Romanticism, and more. We’re damsels not in distress fighting for the all-new optimistic Romantic Revolution. Join us and subscribe. For more information, see our About, Old-Fashioned Romance 101, Modern Romanticism 101, and Romantic Living 101.
By Naazneen Samsodien on November 29th, 2017