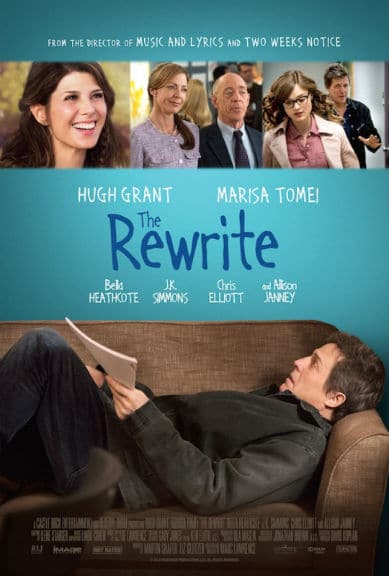 I have a confession to make. Romantic comedies are a type of film that I have a healthy kind of inclination towards. If it’s billed as a romantic-comedy, chances are at some point or another I’ll happily see the movie. So of course Hugh Grant’s latest romantic comedy guaranteed a viewing. While The Rewrite was originally released in the U.K., for America, The Rewrite is one of those Indie-esque films that slipped under our radar. It has a prominently American cast and still, until I randomly ran across the film, I’ didn’t know anything about it. Hopefully, I can remedy this same problem for those in the dark as I was.

The Rewrite is a story about a washed-up scriptwriter named Keith Michaels (Hugh Grant) who is having no success pitching his ideas to studios. According to them, they don’t have the “edgy” feel they should. Everyone wants a kick-butt female lead for instance. Following his soaring success in the early nineties (including an Oscar win), Keith’s lack of work is affecting his ability to maintain his lifestyle. This is when his long-suffering agent pitches him the one thing he will be hired for: teaching.

There’s a college course opening in Binghamton, New York for a screen writing class. Once there, Keith discovers he doesn’t mind being a teacher when a young student (Bella Heathcote) shows more than a passing fancy in him. But things quickly get complicated. It winds up being Keith who has something to learn through a single mother (Marisa Tomei) and his class of ten students. 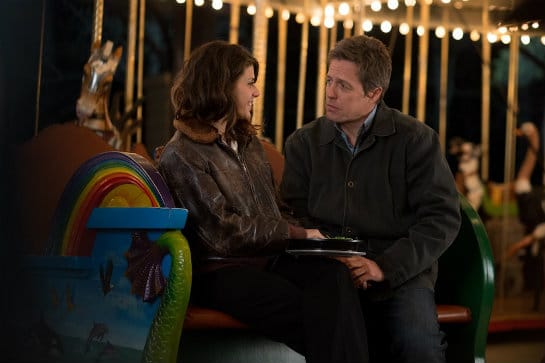 If I’m being honest, for some reason or another, I feel as if Hugh Grant’s bumbling-like characters hardly ever seem like they rise to having truly good character arcs, though he always manages to ensure the characters to be likable. Perhaps by now, I shouldn’t be surprised when I walk away loving each of the films (with exception to perhaps one) he headlines. This film is absolutely no different. Grant’s character is still the foot-in-your-mouth kind of guy, yet there is something entertaining and “right” how he goes about playing this character.

What’s special about this film is that it shouldn’t be defined by the genre it likely falls into: a romantic-comedy. On the surface, the film has similar mannerisms to a romantic comedy, but beyond that it’s a story about a person finding out what it means to become their best version of humanity. Keith isn’t always this likable guy because he uses awful judgement (early on), yet we one way or another still root for him and wish to see him get his stuff together. He’s just a fun character too.

Same that’s true of many stories, however, this script has its flaws. That being said, the ‘flaws’ were more about keeping true to the instinct of the character than cheating us out of a good story. There’s more to the concept than mere “fluff.” It’s not just about a guy who is able to fall back into a relationship to soothe his “issues.” There is a mature voice of reason in Tomei’s Holly, but the story lends itself more to being about Keith reaching the conclusions to shape up, instead of someone nudging him forward. He sees his past reflected in someone’s future, which reminds him why he began this journey in the first place. 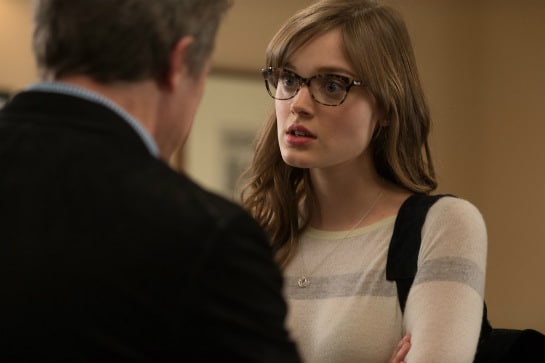 Lest it appear that the characters were the only thing I enjoyed about this, let me talk about the other elements of the story. There were some terrific sequences of dialogue and witty banter to enjoy. I loved that the script pokes some holes in the popular tropes we see at the box office today, and through Keith’s desire to write something, the scripts he pitches are funny and innovative.

Also entertaining were all of the Jane Austen references. In particular, the conversation near the end that references Sense and Sensibility, an Austen adaptation that Grant starred in during his early acting career. The cast was also good and played off each other well. It’s always pleasant to see more of an “unpopular” cast top-billed than whoever is the latest ticket seller at movie screens. Plus, we get a chance to see Bella in something leading up to what could be a star-attraction role in Pride and Prejudice and Zombies.

Though the pace moves slowly in comparison to some romantic comedies, the progression of the story is spot-on. I liked that it allowed time for its lead character to reach conclusions through a learning process (in his own time) and for the story itself to “breathe.” The ambiguous ending won’t be to everyone’s liking, but with its uplifting moments that might tug on your heartstrings, we can forgive the script this one transgression. I found the ending to be in its proper timing and place. Rather than seeing it as lacking what could have been without all the mistakes, it’s more of a tomorrow is a new day – posing a chance to learn from the mistakes and embrace the lessons life teaches us.

Our romance-themed entertainment site is on a mission to help you find the best period dramas, romance movies, TV shows, and books. Other topics include Jane Austen, Classic Hollywood, TV Couples, Fairy Tales, Romantic Living, Romanticism, and more. We’re damsels not in distress fighting for the all-new optimistic Romantic Revolution. Join us and subscribe. For more information, see our About, Old-Fashioned Romance 101, Modern Romanticism 101, and Romantic Living 101.
Pin this article to read later! And make sure to follow us on Pinterest.
By Rissi JC on April 14th, 2015