To All the Boys I’ve Loved Before (2018) Netflix Review

You know those stories you wish for, anticipate and dream of? The kind that simply doesn’t appear on the big screen anymore because Hollywood obsesses over their next big action sequence? Movies like this adaptation of To All The Boys I’ve Loved Before simply do not come along anymore. This is why, when they do, they deserve to be seen.

For as long as she can remember, Lara Jean Song Covey (Lana Condor) has had a crush on the boy next door. Josh Sanderson (Israel Broussard) is perfect and he’s been Lara Jean’s best friend since they were still on training wheels. The only problem is, he’s been dating her sister Margot for two years. But despite this, it was Lara Jean who first loved Josh. So much so, that those many years ago, she penned a love letter to Josh. The letter, meant for her eyes only, was a way for Lara Jean to deal with her intense emotions.

This happened four more times, to four different boys whom Lara Jean once had crushes on. This includes a boy from camp, a boy she once had model U.N. with, and a boy from a dance. Then there’s Peter (Noah Centineo), the popular boy who’s dating her friend-turned-enemy. Now, as everything in Lara Jean’s family starts to change, her letters are mailed, and with them, all her secrets.

Recently, Netflix has been taking a proactive approach to creating original content. So far, what I’ve seen impresses me. This pattern holds true of the delightful adaptation To All the Boys I’ve Loved Before, which is based on the novel by Jenny Han. Before I share all of my feels from this film, let me just say, run out and read the novel on which this adaptation is based. It’s magic.

Like any adaptation, To All the Boys I’ve Loved Before does bend a few rules. Some things change a bit and take a different approach to the material. Fortunately, this isn’t necessarily a bad thing. Instead, the slight changes or alterations make this story all the more swoony. If there’s one flaw, it’s that “meet cute” from the novel (which is adorable) is cut, but I do understand the necessity of this. Plus, the film makes up for this in a million and one other ways.

“…I could write you notes every day.” 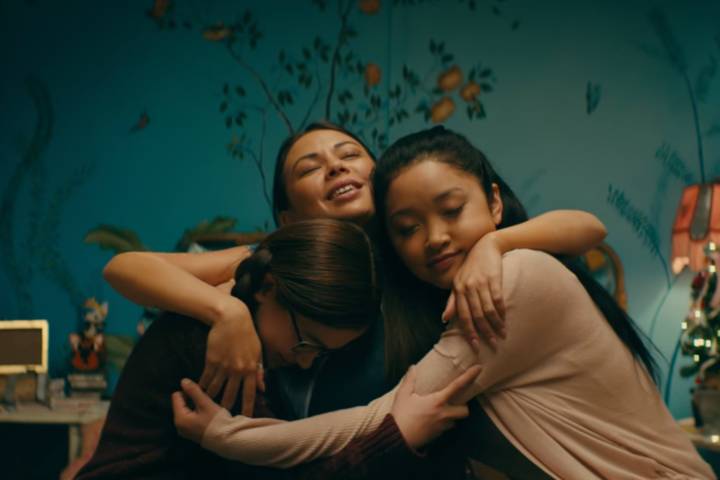 Directed by Susan Johnson, who also directed the adorable Indie film Carrie Pilby, this is the kind of movie we dream of. But sadly, it’s a story (romantic-comedy) we rarely see now on the big screen. The script is penned by a newcomer, but it uses all the good things about the novel and takes some liberties to enhance the story. There’s behind the scenes talent, and likewise, the stars in front of the camera, who make this story shine. Lana Condor is perfection as the lovable heroine, Lara Jean. We fall in love with her as Jenny Han writes her, and seeing Lana’s performance is like falling for the character anew. The sisters are also delightful. Then there are the men in Lara Jean’s life.

RELATED | Our New Manifesto: How to Live a More Imaginative, Romantic Life

John Corbett plays the Covey sister’s father, which he does with ease and wit. Then there are the crushes to whom she writes love letters. Two of them remain fundamentally the same while Lucas plays a slightly bigger part and becomes a friend to Lara Jean, which is lovely. But it’s really Josh and Peter who earn the most screen time. I appreciate that Josh and Lara Jean’s relationship has shifted (thankful for this!) and I adore the romance between Peter and Lara Jean (which feels, if possible, ten times cuter). Their on-screen scenes steal the show with their off-the-charts cuteness; they’re genuine and charming. Plus, I truly feel that Peter comes to see Lara Jean as more than what she begins as; a girl to irritate his ex.

If you like sweet romantic-comedies that are about more than inappropriate jokes, To All The Boys I’ve Loved Before is a dream. The story takes hold of your heart from the opening frames, and doesn’t let go until that final scene. Those who are searching for their next romance need look no further than this Netflix original. It will steal your heart.

Content Note: There is some profanity and sexual innuendo, but nothing graphic. The rating is TV-14.

Where to Watch: You can stream To All The Boys I’ve Loved Before on Netflix.

Did you watch To All the Boys I’ve Loved Before? What are your thoughts on this YA rom-com? Let me know in the comments!

Our romance-themed entertainment site is on a mission to help you find the best period dramas, romance movies, TV shows, and books. Other topics include Jane Austen, Classic Hollywood, TV Couples, Fairy Tales, Romantic Living, Romanticism, and more. We’re damsels not in distress fighting for the all-new optimistic Romantic Revolution. Join us and subscribe. For more information, see our About, Old-Fashioned Romance 101, Modern Romanticism 101, and Romantic Living 101.
Pin this article to read later! And make sure to follow us on Pinterest.
By Rissi JC on August 28th, 2018