One of Netflix’s new titles available to stream under their “Netflix original” banner is the romantic-comedy Set It Up. With its cheerful heroine and snappy wit, it’s imperfect but also really entertaining!

The story is all set into motion when two overworked assistants, Harper (Zoey Deutch) and Charlie (Glen Powell) meet (in what is, an adorably cute meet-cute by the way). You see Harper is desperate to present to her boss the dinner she expects (preferably ten minutes ago). Only trouble is, Harper doesn’t have her wallet, and Delivery Guy is having none of it. Into the office lobby, strolls Charlie, who is also desperate to find food for his demanding boss. The difference is, Charlie has cash.

RELATED | ‘Book Club’ Review: How to Make a Successful Rom-Com

What started as a not so friendly first impression soon turns into one of Harper’s brilliant ideas. You see, she decides that with Charlie’s help, the two of them are going to set up their demanding bosses in a very Much Ado About Nothing kind of way. If they can nudge these two people towards a potential romance then maybe Harper and Charlie could get a life outside of work! Of course, as is the case in all romantic comedies, nothing ever goes as planned. Not to mention, the growing feelings between new besties. Set It Up is very When Harry Met Sally in the best possible way.

Thoughts on Set It Up

This is easily one of the most entertaining romantic comedies I’ve seen in recent years. It has that “it” quality that some films never manage to capture. Of course, much of this is owing to the cast. In addition to the fantastic performances from Zoey and Glen, Lucy Liu and Taye Diggs co-star as the pair’s respective bosses, and everyone is superb. But it’s perhaps Zoey Deutch who shines brightest. Her Harper is without question one of the most likable leading ladies in recent rom-com history. Not only is she smart, she’s funny and her cute awkward personality is lovable. This makes her universally relatable, which in turn makes her feel like a best friend. 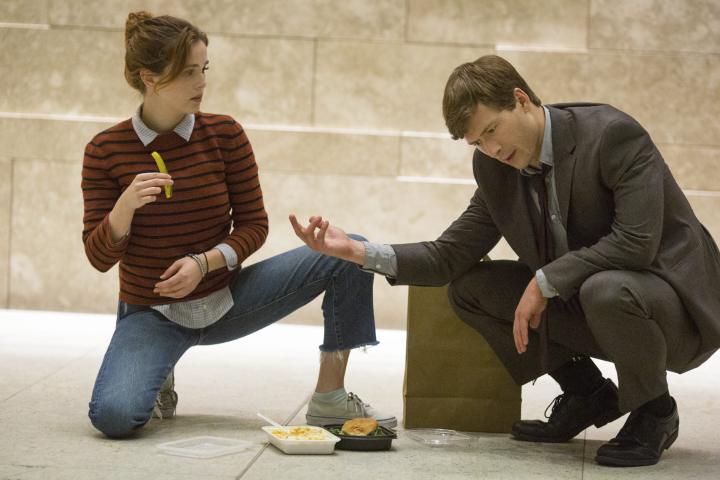 Like many films, however, Set it Up does have flaws. For instance, some of the dialogue disappoints, and because of this, certain comedic (and overly sexualized) lines fall flat in a quest to be “funny.” And yet (wink wink), I do think that the good outweighs the flaws. The script is sassy and sharp (and contains some truthful gems of wisdom), and the workplace setting lends to the overall hustle-bustle of the story. Before five minutes pass, the story drew me in, and I could appreciate the clever story the script sets up. It’s the witty nature of the story that keeps things moving, but it’s the characters who keep us invested.

If you like romantic-comedies with likable characters, this one is worth a night in. It’s Devil Wears Prada with more romantic angles. Unlike some dreaded first meetings, Set It Up is one “set up” I’m happy to be coaxed into.

Content: Unfortunately, for all its perks, this one does contain some adult situations, crude dialogue, and profanity, including 1-2 uses of the F-word. TV-14 is the film’s rating.

Where to Watch: Stream Set It Up exclusively on Netflix.

Our romance-themed entertainment site is on a mission to help you find the best period dramas, romance movies, TV shows, and books. Other topics include Jane Austen, Classic Hollywood, TV Couples, Fairy Tales, Romantic Living, Romanticism, and more. We’re damsels not in distress fighting for the all-new optimistic Romantic Revolution. Join us and subscribe. For more information, see our About, Old-Fashioned Romance 101, Modern Romanticism 101, and Romantic Living 101.
Pin this article to read later! And make sure to follow us on Pinterest.
By Rissi JC on June 26th, 2018