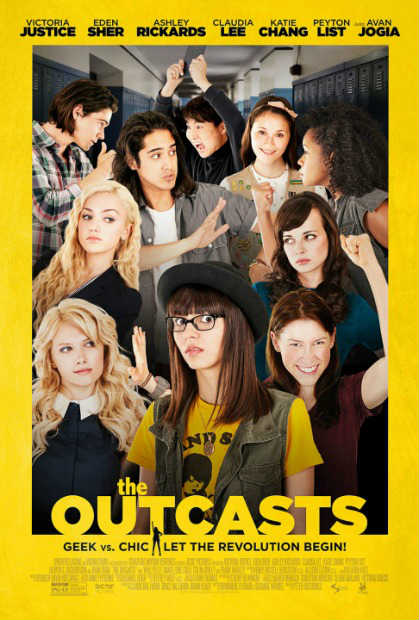 Teen films and adaptations come and go. Some endear themselves. With others, you blink, and you miss their entrance and exit. Then there are those that slip under the radar, and work themselves into our hearts from their “hello” to the final “that’s a wrap” scene. The Outcasts is one such film.

Mindy (Eden Sher) and Jodi (Victoria Justice) have been best friends since their middle-grade years. They’ve stuck together through their awkward years, and now all that remains is to get through their senior year of high school to get through. After that, Mindy is off to MIT (or so she aspires to) and Jodi, well, Jodi doesn’t know what’s next. The focus must be on surviving senior year.

Like every high school, theirs is typical. There are the cliques, nerds, goths and cool kids, who simply don’t mingle. Above it all rules Queen Bee, Whitney (Claudia Lee). In her circle there’s the queen-bee-in-training, Makenzie (Peyton List); the desperate best friend (aka a Whitney-wannabe), Paloma (Jeanette Dilone); and then there’s Dave (Avan Jogia).

When Whitney humiliates Jodi with a prank, Dave proves he’s different. But when Mindy, along with a group of outcasts plot revenge, to what lengths will Mindy go to prove her point?

When I saw the trailer for this film (once know as The Outskirts), I distinctly remember thinking one thing: that it sure looked like fun. Time passed plus add in the fact that it’s an Indie feature (and my theater isn’t known for getting these), and I forgot about The Outcasts. A reminder came with the chance to review this film (with thanks to the producers!), a very happy accident indeed.

The script, on its surface, is as familiar (and in my opinion, “comforting”) as something like apple pie. It’s a high school scene with geeky kids being bullied by the popular kids. Familiar, right? Well yes and no. Its structure and set up is, yes, very much the same as its peers. But look deeper and you discover a story that is as unique as it is happy-go-lucky.

RELATED |  Romantic Moment of the Week: The DUFF’s Wesley and Bianca

What I love best (well, aside from the cast, who we’ll talk about later) is the way the writer challenges the genre norm. Going into greater detail is impossible without spoiling anything (and experiencing this with fresh eyes is part of the charm), but suffice to say, there is much I admire about the film. It’s the little things that make this anything but an outcast.

Helping propel its memorable status is the fantastic cast. Many of whom television aficionados will recognize. From the leads Eden Sher (ABC’s The Middle) and Victoria Justice (Victorious, MTV’s Eye Candy) and Claudia Lee who played Lemon’s little sister, Magnolia in CW’s Hart of Dixie, the cast impresses. Also, fun to note is the fact that Avan and Victoria have co-starred together twice before in Victorious and the TV musical, Spectacular!

Those of us who have seen and like films such as The DUFF will find another best friend in this production. If you’re looking for something that will make you laugh, but also contains themes that are relevant to culture today, The Outcasts is a must see. And none of this speaks to the fact that many of us will probably relate to one of these characters. That alone makes The Outcasts akin to a kindred spirit.

Where to Watch: The Outcasts is currently available on VOD on Amazon Video. It arrives on DVD May 13th!

Content Note: There is some crude humor, but it’s never graphic. One or two commonplace profanities and a few “adult situations.” The film is rated PG-13.

Watch the trailer for The Outcasts, and let me know, have you seen or do you plan to watch this one?

Our romance-themed entertainment site is on a mission to help you find the best period dramas, romance movies, TV shows, and books. Other topics include Jane Austen, Classic Hollywood, TV Couples, Fairy Tales, Romantic Living, Romanticism, and more. We’re damsels not in distress fighting for the all-new optimistic Romantic Revolution. Join us and subscribe. For more information, see our About, Old-Fashioned Romance 101, Modern Romanticism 101, and Romantic Living 101.
Pin this article to read later! And make sure to follow us on Pinterest.
By Rissi JC on May 3rd, 2017