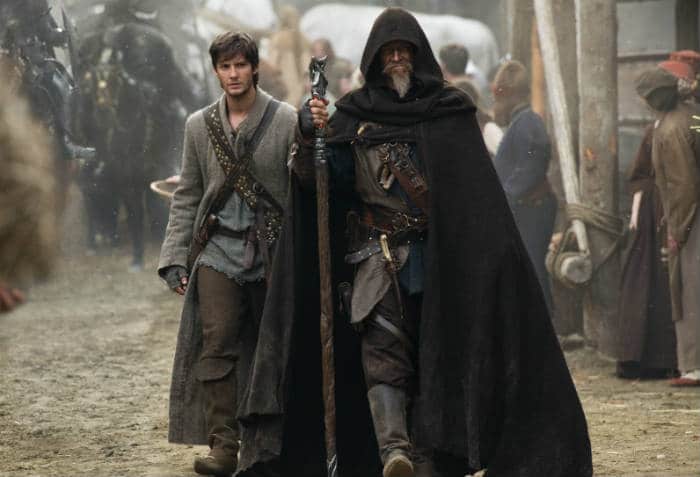 Sometimes the films that pique one’s interest in their early phases become lost in the shuffle of more popular cinematic pursuits. Such was the case with the high-fantasy adventure Seventh Son. Based on a novel, it intrigued me because of its cast only to then be forgotten. I’d seen review titles in various places which reminded me it was on DVD, but it wasn’t until this month when, one trip to the store later, I returned home with a copy in hand and finally sat down to discover its idea of magic.

Hunting witches have been the task of Master Gregory (Jeff Bridges) and his kind for many years. His apprentice Will (Kit Harrington) is the closest thing he has to a son and the one man who will carry on his work. When Gregory’s past returns to haunt him in the form of the Queen Witch, Malkin (Julianne Moore), his world is flipped upside down, with new dangers lurking around each corner. The two share a mysterious past that keeps Malkin holding only revenge in her heart as she escapes her prison and begins to rebuild her home and army. In the confrontation between Malkin and Gregory, Will is killed leaving Gregory alone in his quest to derail the witch’s plans.

This leads him to the doorstep of young Tom Ward (Ben Barnes). Legend dictates that the seventh son born of a father who is himself a seventh son can apprentice to become a Spook (witch hunter). As Tom leaves to join Gregory on his journey, his path crosses with that of the mysterious Alice (Alicia Vikander) who may not be as innocent as Tom believes her to be. 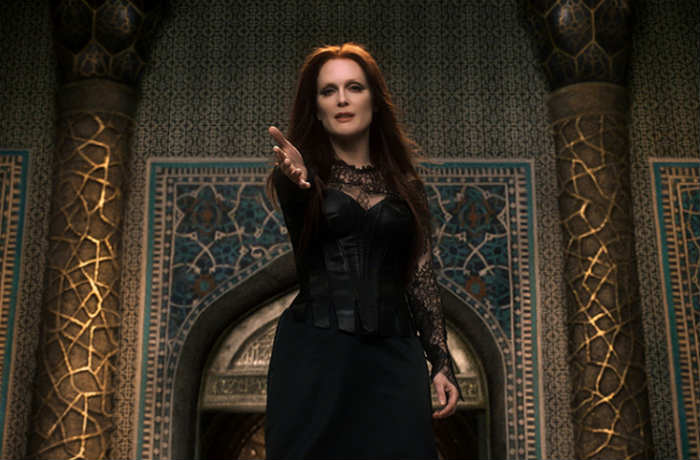 Unlike richer fantasy films, this one does stretch itself a bit thin. To start with, I didn’t feel as if the mythology behind it was all that well described. The film and script could also be cliché. Fortunately, the making of features does a nice job of tightening up the script and the story the writers intended to tell. The legend behind the “Seventh Son” was left up to the viewer to guess as its past wasn’t explained save for knowing Gregory sought the seventh son in the Ward family. As entertaining as everything was, it might have been nicer to enjoy a more fleshed-out plot rather than a dangling idea of what the legend meant.

Aside from all of the primary players (minus Game of Thrones actor Kit Harrington who likely gets no more than fifteen minutes of screen time yet was still ranked high in the billing), Olivia Williams (A&E’s Emma, Miss Austen Regrets) plays Tom’s mysterious mother and Djimon Hounsou a creepy assassin. The cast assembled is really quite brilliant. Jeff Bridges always turns in an excellent performance and seemed to have great fun with his character, and of course, it was nice to see Chronicles of Narnia’s Ben Barnes in something else. Then there is the rising star talent of Alicia Vikander. Her leading lady (who naturally is half of the story’s sweet and complex romance with Tom being the other half) is an interesting if not sometimes cliché characterization, yet despite that, Alicia’s portrayal keeps you curious about whether or not Alice is ultimately out to make the right or wrong choices. 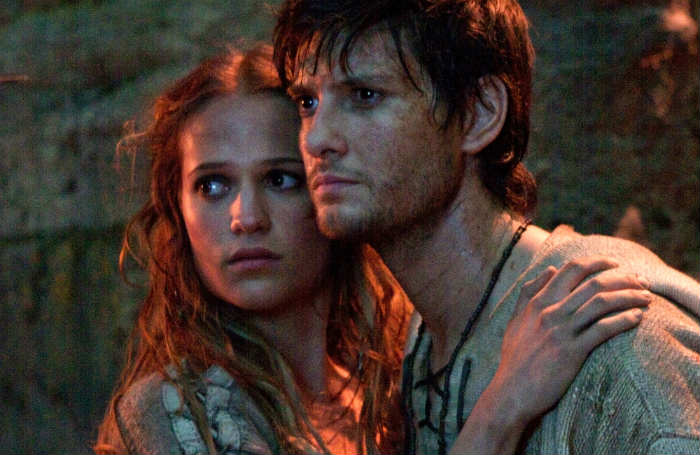 Some fantasy productions have the misfortune of appearing overly done up in CGI special effects. This film didn’t seem to suffer that fate. Even with its many dragons and mystical creatures, nearly everything looked realistic and terrifying in equal parts. What I liked best about the design of the piece was how the designers meshed the costuming with the mystical alter-ego of the characters. The small details that indicate the ugliness of the person (or beauty if that be the case) is a unique way to visualize a character giving more visual cues than most period dramas have the luxury of, and really, it’s quite clever. Then there are Alice’s fierce ensembles, all of which are unique creations.

When all is said and done, I did quite like this. If you like fantasy akin to BBC’s family orientated Merlin or something like Jupiter Ascending, this might be worth a look. It’s got a nice dose of humor and sense of place while giving us an exciting, not to mention a kind of enchanting sense of entertainment.

Have you seen Seventh Son? What did you think? Did you like it, dislike it? Sound off with any comments you have down below!

Our romance-themed entertainment site is on a mission to help you find the best period dramas, romance movies, TV shows, and books. Other topics include Jane Austen, Classic Hollywood, TV Couples, Fairy Tales, Romantic Living, Romanticism, and more. We’re damsels not in distress fighting for the all-new optimistic Romantic Revolution. Join us and subscribe. For more information, see our About, Old-Fashioned Romance 101, Modern Romanticism 101, and Romantic Living 101.
Pin this article to read later! And make sure to follow us on Pinterest.
By Rissi JC on February 12th, 2016