Living a bleak existence at a London orphanage, 12-year-old Peter (Levi Miller) finds himself whisked away to the fantastical world of Neverland. Adventure awaits as he meets new friend James Hook (Garrett Hedlund) and the warrior Tiger Lily (Rooney Mara). They must band together to save Neverland from the ruthless pirate Blackbeard (Hugh Jackman). Along the way, the rebellious and mischievous boy discovers his true destiny, becoming the hero forever known as Peter Pan. 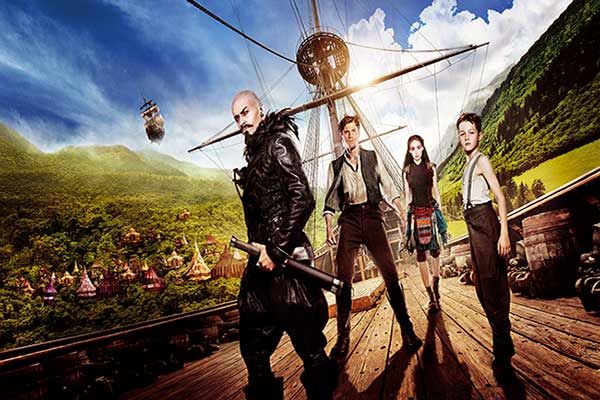 Let’s face it, Pan has some big shoes to fill. The 2003 Peter Pan gave us a psychological exploration of the theme of growing up. Finding Neverland (2004) took us on a journey of magic realism into JM Barrie’s own psyche. And Once Upon a Time gave us a very dark version of Neverland and a roguishly charming Hook, complete with guyliner.

And does Pan fill these immense shoes? Well, not really. It basically does what it says in the synopsis, and tells the adventurous tale of a boy finding his destiny as a hero, a tale which may or may not be improved by knowing JM Barrie’s original creation, Peter Pan. As director Joe Wright says in an interview with ComingSoon.net, the creative process of making the film was similar to sampling the bass line from a classic track to create a new song.

“It was an amazingly complete screenplay, but one of those great screenplays that I loved that kind of is a complete story, but offers me lots of space to invest with my own kind of feelings and imagination. But those nods to the original story just delighted me and it’s like a little game of “Wink Murder” with the audience, they become a relationship with the audience that is there that I really enjoy.”

But I came to Pan so determined to find symbolism that the film in my head quite possibly became realer than the one I was actually watching. For a start, I believed I’d worked out the end from the beginning. The film begins with a mother abandoning her baby on the steps of an orphanage, probably in the late 1920s.  The action then fast-forwards to World War II, with young Peter and his friends living in that very orphanage, and waging their own war on the nuns who run it. Peter has an unshakable faith that he will find his mother some day.

Word War II?  I hear you cry. But Peter Pan takes place in Edwardian times. Yes indeed, and so instantly my over-active writer’s mind decided that, once Peter was established in Neverland (and, therefore, outside time) he would return to London, for some reason emerging in the 1900s, and meet Wendy who would be his actual mother. This did not happen. Instead, his (dead) mother promised to be always with him in Neverland. But if that was the case, why would he look for Wendy to be his mother in the future? (Or past, depending on which way you look at it).

By now, the symbol-seeker had gone into overdrive. Nuns. The Virgin Mary. A virgin mother, like Wendy. (Safer than an adult mother, who is unreliable). Oh, and the mention of orphans being sent to Canada. That really happened, at various points in history, as well as children being evacuated to Canada. And Australia. Ohh, Australia! Hugh Jackman and the leader of the Tribe. He’s obviously Australian. Is Neverland a metaphor for Australia? Both children and adults were forcibly sent there at different periods. And there was mining. And the original inhabitants got pushed to the sidelines. Or is it a metaphor for Canada? Or death? Is there a connection between the actual air raids of WWII and Blackbeard’s “air raid” on the orphanage? And who is Hook? Is he Canadian? Questions, questions, questions.

There was no payoff for any of my symbol-driven ideas. In all likelihood, Pan is just a simple story about a boy finding his destiny. But even taken at face value, it leaves us with more questions than it answers. If Blackbeard was using fairy dust to create eternal youth, does Peter steal it? Or as a half-fairy, is he naturally immortal? But then what about Tiger Lily, Smee, Nibs etc?  In the original Peter Pan, no one in Neverland seems to get older. How do Peter and Hook become enemies? Where do all those miners go? Surely they can’t all become pirates? Does Peter go back to the 1900s, and why did he start off in the 1940s in the first place? Questions, questions, questions. For which there are probably no answers.

We’re probably just meant to watch Pan with the mind of an eight-year-old. (Not the mind of an English graduate fantasy writer).  In which case, it’s a fun adventure in which the kid beats the grown-ups. The costume and set design is wonderfully creative. The pirates are like something from a crazy (and slightly scary) circus. The Tribe (who appear to be as multicultural as the miners, begging the question, in what sense are they a tribe?) are like an explosion in your favourite boho clothing shop. It’s like Steampunk versus Solarpunk or something. And it’s lots of fun. I also like the floating bubbles of marine life, the flying fish, and the phosphorescent/electric mermaids. And I imagine the special effects are impressive in 3D (although I watched the film in 2D).

Also on the plus side, Levi Miller is a cheeky and loveable Peter Pan, Hugh Jackman is a charismatically mad pirate, and the film is definitely enhanced by the ever-cool Nonso Anozie and the very hot Tae-Joo Na. To anyone over nine years old, the “Chosen One” plot-line is a bit hackneyed, but on the whole, Pan is enjoyable and definitely not as silly as Hook (1991).

It just raises more questions than it answers.

Our romance-themed entertainment site is on a mission to help you find the best period dramas, romance movies, TV shows, and books. Other topics include Jane Austen, Classic Hollywood, TV Couples, Fairy Tales, Romantic Living, Romanticism, and more. We’re damsels not in distress fighting for the all-new optimistic Romantic Revolution. Join us and subscribe. For more information, see our About, Old-Fashioned Romance 101, Modern Romanticism 101, and Romantic Living 101.
Pin this article to read later! And make sure to follow us on Pinterest.
By Elizabeth Hopkinson on October 23rd, 2015