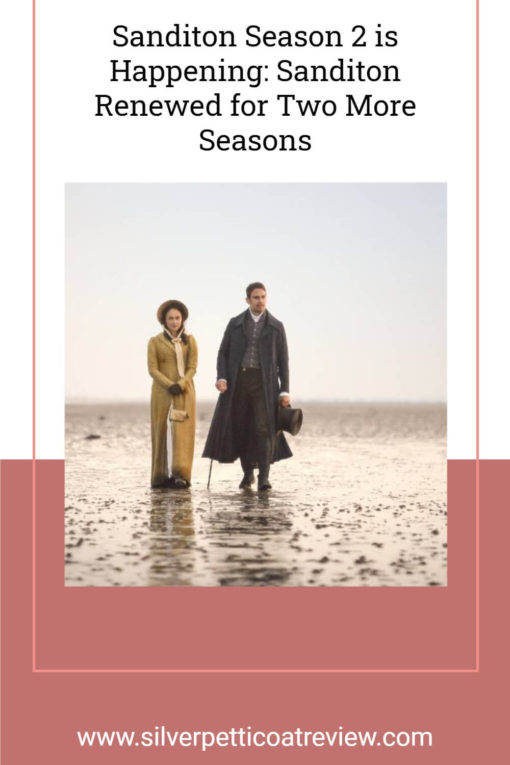 Sanditon is officially back! Today (May 6, 2021), MASTERPIECE on PBS announced that Sanditon would return for not one but TWO more seasons. That is huge and fantastic news.

Susanne Simpson, a MASTERPIECE executive producer, says they are “absolutely delighted to announce a second and third season of Sanditon, a show that has inspired such a passionate and devoted fan base.”

While Will Harrison from BritBox UK added that they “couldn’t be happier to be involved in bringing the wonderful Sanditon back to screens across the UK, and want to thank the fans for keeping these characters alive while plans came together.”

After a massive cliffhanger ending from season one (finishing the series without the typical Jane Austen happy ending) came even more shocking news. ITV canceled the British period drama based on Austen’s unfinished novel, leaving fans of the series…well, more than a little upset.

SANDITON SEASON 2: WHAT WE KNOW SO FAR

The series will air on PBS’ MASTERPIECE in the US and the UK. The series will premiere as a BritBox original. And also air on ITV (the network has already acquired the new seasons).

Justin Young, one of the leading writers of Sanditon season one, is back to develop the two new seasons. He’s taking on the role of showrunner from Andrew Davies. However, Davies’ fans shouldn’t be disappointed. He’ll still be an executive producer and plans to write several new episodes.

Susanne Simpson hints about what fans should expect in Sanditon season two by adding to the announcement that “audiences can expect romance, humor and plenty of twists and turns,” which sounds promising!

According to PBS, here is the official story for season two:

“After fans were left hanging in suspense by the first season’s finale and clamoring for more, the drama will continue to follow the high-spirited and independent heroine, Charlotte Heywood (Rose Williams, Curfew) as she returns to the picturesque coastal resort of Sanditon. Charlotte’s journey is one thread of an intricate tapestry of compelling stories full of intrigue, excitement, and romance. Against the backdrop of beautiful vistas, familiar faces return and new inhabitants are introduced — all of whom will be having adventures as joyous and surprising as the seaside town itself.”

As PBS and BritBox UK just made this announcement, I’m sure more news will soon follow – including which cast members or characters will be back. (Update: Theo James will surprisingly not return as Sidney, so a new love interest must be in store for Charlotte.)

Belinda Campbell of Red Planet Pictures told PBS that “Justin Young and Andrew Davies’ sensational scripts are relevant, timely and captivating and we can’t wait to share all the exciting new developments we have in store for our much loved characters. Now, more than ever, I think we could all do with some joy on our TV screens as well as a healthy dose of fresh sea air.”

RELATED: 35 Romantic Movies And TV Shows Like Sanditon To Watch

Yes, we could all use some happy news and some fresh air! Here’s to Sanditon season two (and three). Cheers to PBS, BritBox, and to the Sanditon Sisterhood, who all helped make this happen.

There is no announcement yet when season two will air, but they plan to start filming later this year in Bristol, UK.

UPDATE (May 2022): You can find out all about season 2 in our review of the entire season. Beware of spoilers.

Are you excited about the renewal of Sanditon? Do you plan to watch Sanditon seasons two and three? Discuss below.