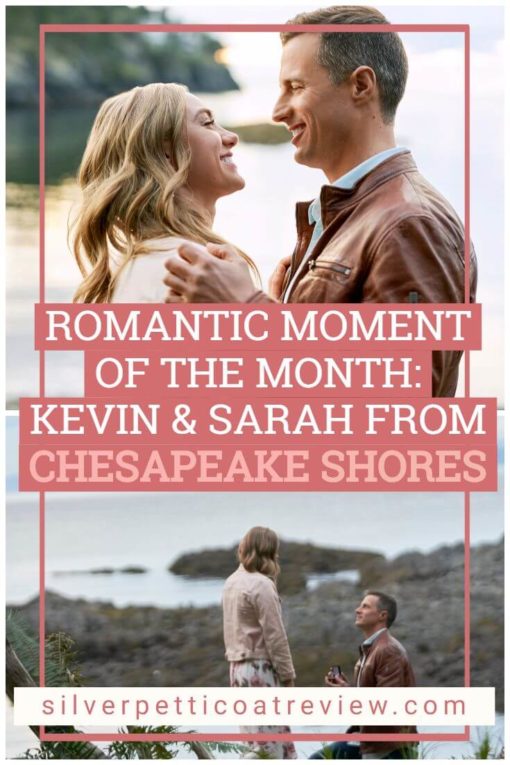 This month’s romantic moment goes to Kevin and Sarah from Chesapeake Shores with their romantic proposal scene!

The Episode: Season four, episode one – “The End is Where We Begin”

The Moment: Kevin and Sarah fall in love, leading to a romantic beach proposal

Throughout the third (and second!) season of Hallmark’s Chesapeake Shores, fans (who refer to themselves as “Chessies”) fell in love with the story of the eldest O’Brien son, Kevin and the feisty firefighter Sarah.

During the season four premiere, a new page turned on their love story. It’s this romantic moment from Chesapeake Shores we put a spotlight on today.

Kevin and Sarah’s love story hasn’t been easy. Kevin, a veteran who has PTSD and an ex-fiancée he might not be over, much as Sarah interests him, isn’t in the right place to begin a new relationship.

It turns out, Sarah isn’t ready for anything serious either. The start of their relationship is light and fun until the emotional secrets of their past interrupt them, and both agree to part ways.

But fate doesn’t agree with their choices. Instead, the pair comes back together. This second chance lasts through distance, the stress of changing jobs, and a big move, all leading to one conclusion: they love each other, and both are committed to making this relationship work.

RELATED | ROMANTIC MOMENT OF THE MONTH: JANE AND RAFAEL IN THE BEAUTIFUL ‘JANE THE VIRGIN’ FINALE

After Sarah moves closer to her family at the close of season three, Kevin chooses to leave his hometown and move to Pennsylvania, a tiny sacrifice if it means he can see Sarah every day.

Kevin doesn’t realize that Sarah has already chosen her own: she’s returning to Chesapeake Shores.

The trials of their relationship have made them rethink everything, and together, they both realize, this relationship, this love story is something they want to hold onto.

In the opening of the fourth episode, Kevin “hypothetically” asks his eldest sister, Abby, how she’d like to be proposed to? Each of his three additional siblings appears as if they know a meeting of the siblings is happening.

As they all banter in a competitive way over what’s better (showy? simple? restaurant with a ring?), sister Bree finally tells him the most important thing, it’s the “emotions” that matter, not the “where” of the proposal.

One thing Kevin does know is the “where.” While visiting sister Jess’s new bed and breakfast, he plans to go on a romantic picnic where he’ll go down on one knee.

As Kevin settles on proposing, throughout the episode, baby sister, Jess plays spy, sending out group texts of the play by play of this special moment. The only trouble is, neither one of Kevin’s first two attempts quite go as planned. A spilled glass thwarts his romantic picnic, and then the next morning, his impromptu breakfast proposal is stalled by a kitchen disaster.

The perfect proposal Kevin so wishes to give Sarah is anything but ideal. But with the help of his sisters, Kevin soon realizes this moment doesn’t have to be perfect. It just has to be true.

With his failed attempts to express his feelings behind him, Kevin and Sarah pack up and head out. The journey home is interrupted by a flat tire. As Kevin works to get them back on the road, Sarah, standing in the distance, tells him to stop, and see the beautiful scene she sees.

Looking up from his task, Kevin sees Sarah standing alone on the cliff’s ledge. Behind her rests a pastel sky of oranges, pinks, and even blue; it’s a scene that is rivaled only by the sight of the woman he plans to marry.

Lost in thought for a moment, he contemplates the question he wants to ask.

Walking up next to her, he catches her hand and takes only a moment to take in the sky and the sounds of the water beneath it. Although this is unplanned, it’s in this space of time that he realizes it is the right moment, and he makes a decision. Looking at Sarah, in earnest, he begins.

“Sarah, I love you more than anything,” he says.

Likewise, on her face, we see she realizes this is more than their typical playful exchange of “I love yous.” She turns towards him, the expectation on her face as one… two heartbeats pass between them.

Framed by driftwood and the beautiful sky, he bends down on one knee, opens a black ring box, and simply asks:

With tears shining in her eyes, this moment’s emotional weight affects her, and Sarah replies, “Kevin O’Brien, I love you.”

Standing to meet her, the two kiss as their arms wrap around each other, and the joy of their emotions unite.

RELATED: 20 OF THE BEST HALLMARK CHRISTMAS MOVIE ENCORES TO WATCH

Pulling back on a small laugh, Sarah continues their usual banter telling him, “You’re supposed to say ‘I love you’ back.”

He continues to tease her before promising her, “I will love you forever…” and then, with cautious optimism, he queries, “so…” he wonders.

They meet again for another sunset kiss, and Kevin places the ring on her third finger, kisses her hand, and an end to part one of their happily ever after closes.

In this scene, we see Kevin and Sarah’s love story, in many ways, come full circle. Is this the last chapter for them? Of course, not. But as Bree so wisely tells Kevin, it’s not the how that matters as the emotions; the things you know in your heart, and the feelings they have for one another.

Kevin loves Sarah with his whole heart, and in this unexpected perfect moment, he realizes, that IS all that really matters when it comes down to it. He’s ready to do life with this sassy and independent woman, and together they’re ready for the next step.