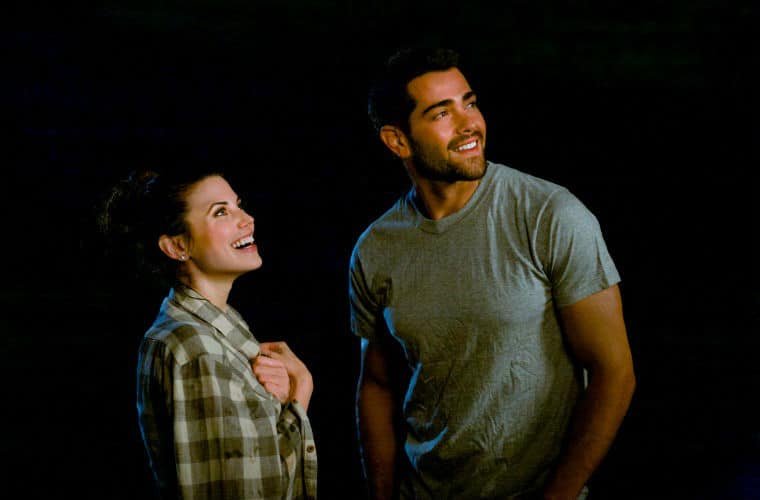 WHEN: Airs Sundays on Hallmark Channel

THE PAIRING: Abby Winters (Meghan Ory, Once Upon a Time) and Trace Riley (Jesse Metcalfe, Dallas)

THE MOMENT: Trace Coaxes Abbey into a Moonlit Swim

Hallmark Channel has become an even greater success than they already were thanks to the addition of TV Show originals. Their latest arrives in summer’s twilight with an adaptation of the New York Times best-selling novel, Chesapeake Shores.

While the story is about the O’Brien family (which consists of five children and their patriarchs), the story centers on Abby (O’Brien) Winters. A divorced mother of two living in New York and working as a successful Wall Street executive. Following a phone call from her sister, Jess, Abby packs up her two girls and returns home for a long weekend where more than one surprise awaits her. Her grandmother has health issues and she comes face-to-face with her past in the form of high school sweetheart, Trace. 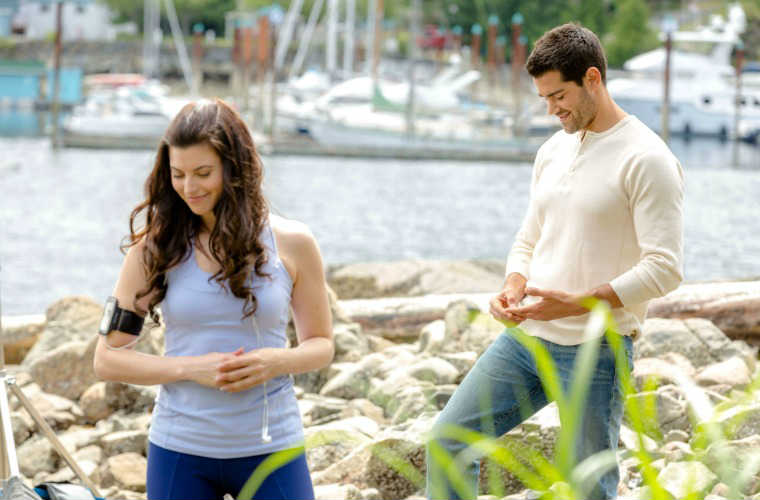 As the two awkwardly remember the past and try to leave the heartache behind them, Abby aims to keep a wall in place between the two (as a kind of safety net). Trace, in turn, pursues Abby because his heart has never really healed following her leaving.

The couple has a few heart-to-hearts including one in which Abby apologizes for leaving. She didn’t know how to say goodbye she tells Trace. In response to her telling him she thought maybe he’d come find her, he asks, “How do you know I didn’t?” But of course, as all shows do, these complications aren’t the only hiccup involved in their reunion. Fortunately, those don’t arrive before today’s romantic moment.

Feeling lost and vulnerable after the health scare with her grandmother and learning her ex’s plans to sue for custody, Abby’s face lights with a smile when she spots Trace drive in. She walks to the door and steps onto the porch where the pair exchange pleasantries. Trace asks about her grandmother and sensing something isn’t right with her, asks her to go somewhere with him. 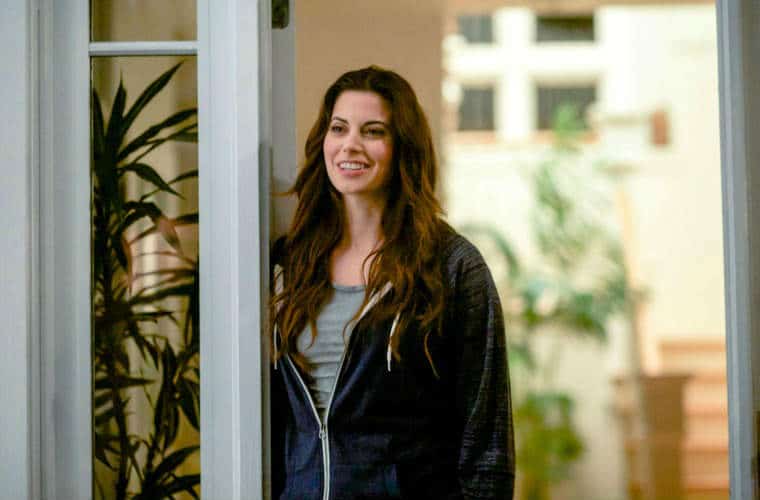 Smiling, he persists, “Just come with me.” 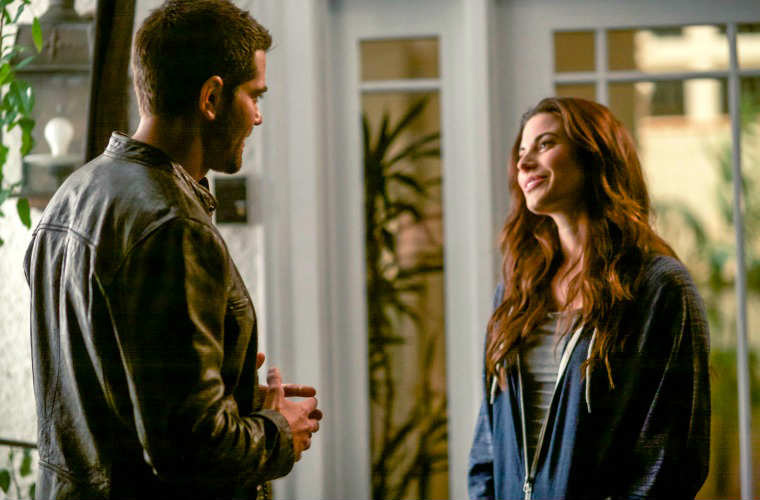 She makes further excuses by saying she can’t leave because of the girls. But with Trace’s insistence (and her father with the girls), she lets Trace pull her back into the past. He takes her to the beach where the pair reminisce. Trace urges her to remember how they used to come to this place and simply talk, for hours sometimes. Feeling as if going back is pointless, Abby concludes their trip down memory lane with, “Life was a lot different back then.” 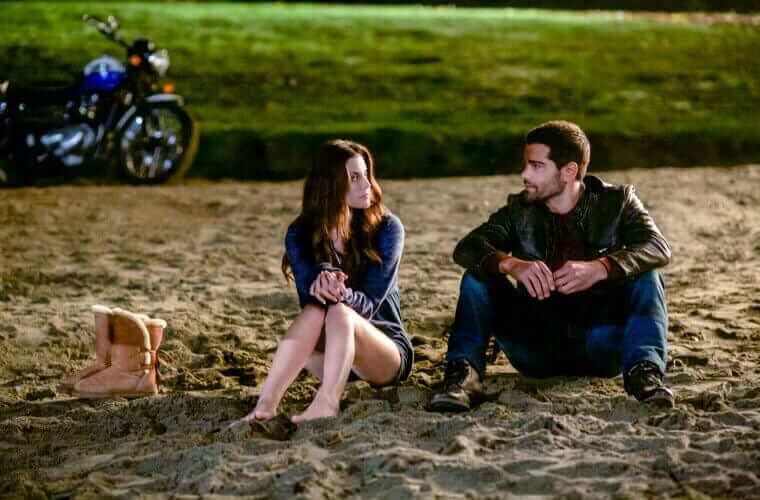 Remembering their many misunderstandings and missed plans to leave together, Trace admits he wasn’t as eager to leave as she. He continues by confessing, “You know, I think it took you leaving to finally give me the courage to do it myself and then I went to New York to look for you.”

Surprise flickers across Abby’s face, and even unchecked joy as she listens to him recount his journey to find her. Just as he was on the verge of showing up on her doorstep he learned of her engagement. As their conversation wanders deeper into why Trace really came home (a secret he’s protecting), he shifts gears by exclaiming, “Let’s go for a swim.”

Abby being the responsible adult she is, resists, saying, “Swimming is not going to fix my problems.”

Swayed by the enigmatic smile of the first man she ever loved and his claim that it will make her feel better, she joins him. 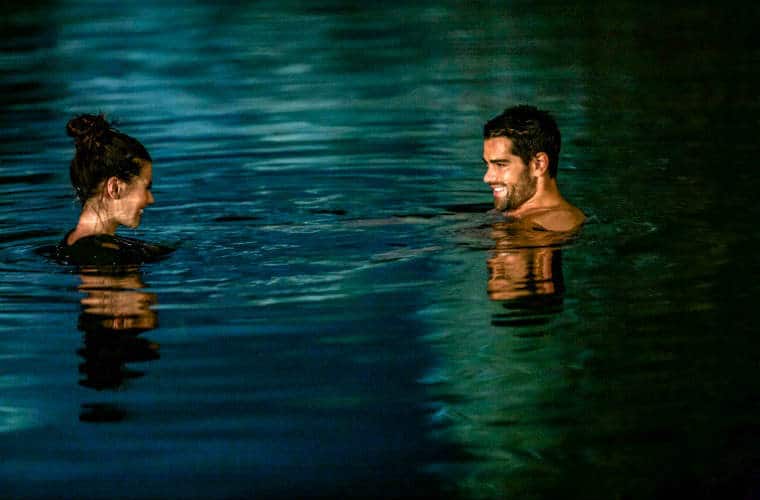 Music swells and the pair splash around the water laughing. Eventually, as if by gravitational pull, and meeting under the magic of the moonlight, they meet for a kiss. 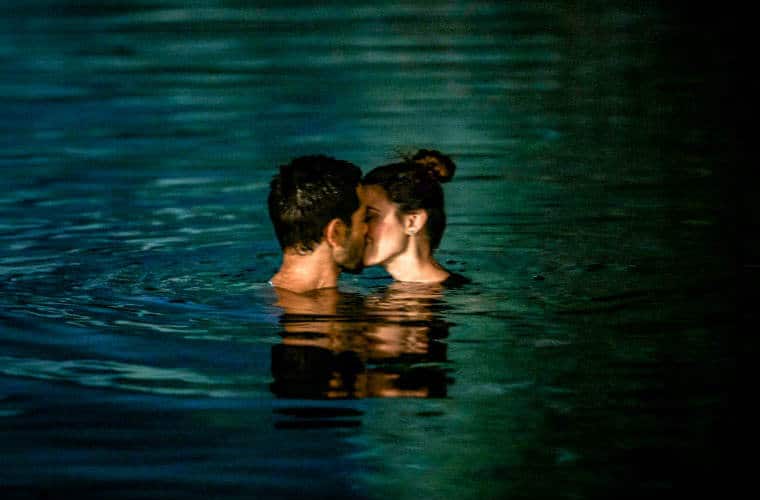 Later, Abby is again swimming, finding it as emotionally relaxing as it is invigorating when Trace finds her. After some cute flirting, and an offer of his shirt (to keep a wet Abbey warm), Abby addresses their impromptu kiss.

Smartly and with a wide smile, he remarks, “Yeah um I forgive you for kissing me.”

Giving back as good as he gives, they tease one another about their memory of the kiss, which differs greatly. Both insist it was the other who initiated the kiss.

Overhead, fireworks burst into the sky. An annual tradition, looking back to Abby, he says, “Some things never change.” The implication is left hanging as he means a great deal more than the firework show.

Holding his gaze, she replies, “I think I like that.”

Trace begins to lean in as if to kiss Abby, but ever so gently she places a hand on his chest, stopping him. 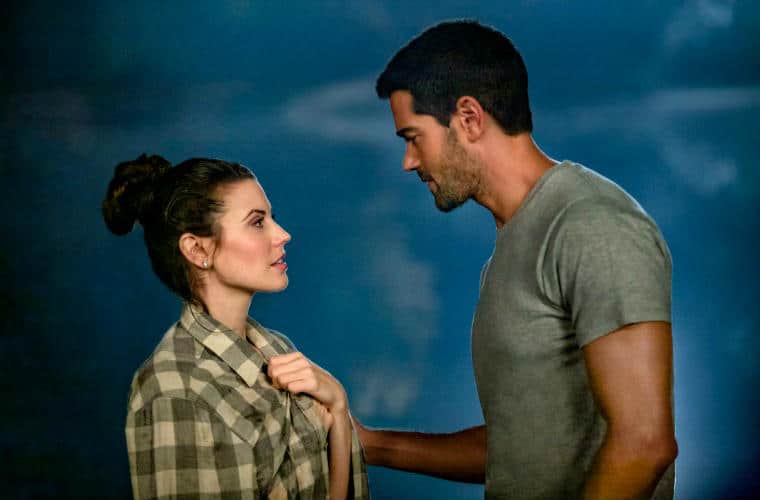 Simply and without further explanation, she tells him, “I’ll see you.”

Walking away, she glances back to see him watching her with a tender look (who thinks he’s not over Abby?) as his parting, hopeful words, “See you around, Abby” follow her…

Though I know (and in fact, already has) many things, other people or timing will work together to keep this couple apart, I 100% adore (and approve of!) this pairing. Perhaps it’s the actors or the way their story is written, but I like this couple best of all the Hallmark shows I’ve seen. There’s something magnanimous about them and so far, I think they have the potential to be the best couple from this network yet.

Did you catch Chesapeake Shores on Hallmark? What are your impressions? What do you think is next for Abby and Trace? I’ve love to read your thoughts, so sound off below!

Our romance-themed entertainment site is on a mission to help you find the best period dramas, romance movies, TV shows, and books. Other topics include Jane Austen, Classic Hollywood, TV Couples, Fairy Tales, Romantic Living, Romanticism, and more. We’re damsels not in distress fighting for the all-new optimistic Romantic Revolution. Join us and subscribe. For more information, see our About, Old-Fashioned Romance 101, Modern Romanticism 101, and Romantic Living 101.
Pin this article to read later! And make sure to follow us on Pinterest.
By Rissi JC on August 27th, 2016

2 thoughts on “Romantic Moment of the Week: Chesapeake Shores – Abby and Trace”