Years ago, Sunday nights included Disney TV movies. I remember each time one would air, as the familiar antics of Tinker Bell would appear, the family settled in for a family movie night. One of those premieres was Princess of Thieves, a loose sequel that introduces us to a new generation of Robin Hood.

In this legend, the story begins with the tale of the birth of Robin Hood’s young daughter, Gwyn. Through the years, the girl is kept safe by her father (Stuart Wilson) and his band of merry men. As a young woman, Gwyn’s greatest challenge arrives when the calculating Sheriff of Nottingham (Malcolm McDowell) captures his nemesis, looking for information.

Headstrong and not one to wait for rescue, Gwyn takes charge and plots a rescue. The unexpected hitch in her plan is the arrival of newcomer Conrad (Stephen Moyer), a handsome man no one seems to know anything about. Still, upon her insistence, he tags along with Gwyn. A mission that is not only to rescue her father but also a quest to end the tyranny under a corrupt reign.

As many times as this timeless legend has been re-tooled and reimagined, this version is a new-to-me interpretation. Whether it’s the lighter fare that features a talking Fox as its hero or a progressively darker BBC TV series, the story never ceases to try and reinvent itself. Though the production suffers from mediocre filmmaking because of its production date, Princess of Thieves remains an entertaining way to spend the evening. 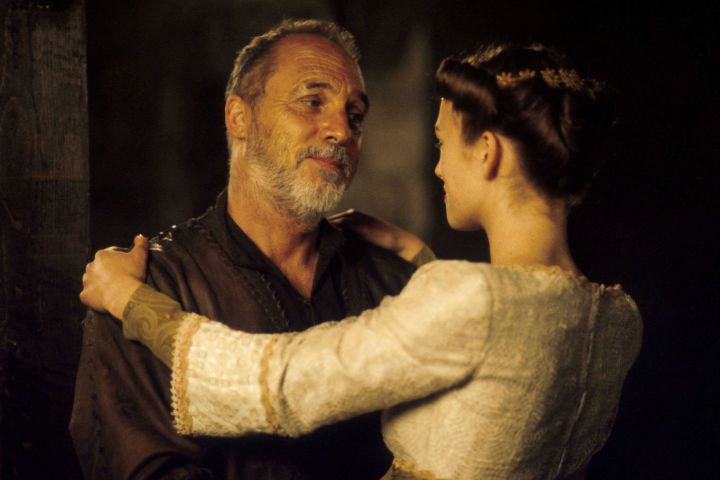 One of the things I liked best about the film, at the time, was its leading lady. Keira Knightley was a newcomer in the early 2000s. As we look back, this worked as a kind of “launch pad” to her storybook career. One that would include further collaborations with Disney (Pirates of the Caribbean) and now, also future Disney top lines (The Nutcracker).  She’s quite good as the spunky Gwyn (perhaps something she built on for Elizabeth Swann!), a role I think suits her acting style. Behind the Scene features attest to her talents despite being a teen, and many years her co-star’s junior. The rest of the cast is also worth noting, especially the fact that Stephen Moyer plays in this one, an actor many may recognize from his popular stint on True Blood.

Though imperfect, the story keeps the pace moving rapidly with its thirst for adventure, and if you’re anything like me, you’ll be invested. The time period isn’t one I seek out when it comes to favored period dramas. That said, in this case, I do make an exception. Same goes for the film, Ever After, which you can liken to this film. Bittersweet in its ultimate conclusion, rumor has it this film was intended as a pilot vehicle for a television show. Given this, I understand why the ending feels more open-ended. Likely there were script ideas swirling that would have reunited all of these characters.

As a story, this one is adventurous and full of would-be romanticism. It lacks a bit of polish, and the script could have been better. That said, between its talented cast and the old-fashioned swashbuckler “feel,” Princess of Thieves is perfect weekend viewing. Especially for those of us who, now and again, enjoy a nostalgic little trip down Disney lane.

Princess of Thieves is available to purchase on DVD (on Amazon) in various regions.

Content: Rated TV-PG, this one contains nothing overly offensive, though there is some medieval torture.

Our romance-themed entertainment site is on a mission to help you find the best period dramas, romance movies, TV shows, and books. Other topics include Jane Austen, Classic Hollywood, TV Couples, Fairy Tales, Romantic Living, Romanticism, and more. We’re damsels not in distress fighting for the all-new optimistic Romantic Revolution. Join us and subscribe. For more information, see our About, Old-Fashioned Romance 101, Modern Romanticism 101, and Romantic Living 101.
By Rissi JC on March 19th, 2018