Descended from English folklore, Robin Hood has been a consistent character in the Hollywood stable. After a few years pass, another wave of interest in the heroic outlaw is reinvigorated as Robin and his band of merry men hold audiences captive with their adventurous – and oftentimes romantic – escapades. Most of us, irrespective of age, love some incarnation of the Robin Hood tale.

Through various reimagining’s, the general tale has been told on stage, in musicals, on the big and small screen, through comedy and drama. There have even been a few spin-offs featuring Robin’s daughter played by a young Keira Knightley in Princess of Thieves. Vampire Bill – I mean Stephen Moyer – also stars as an illegitimate Prince. Yes. This movie is a real thing.

In any case, since the Hollywood machine has recently announced that Robin Hood will be revisited, I thought it might be fun to have a peek at my favorite Robin Hood adaptations. My three choices coincidentally come from three different mediums. While they all have Robin Hood (and his merry men) in common, they are each its own creation, different in tone and texture. 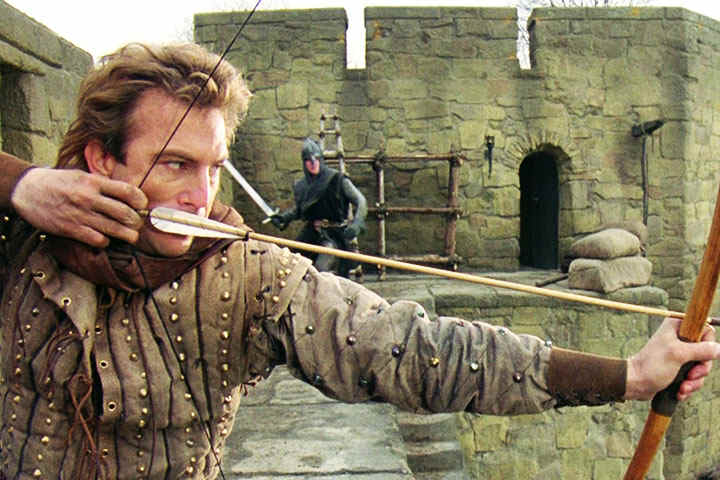 Listen, let’s talk for a moment. If you are of a… shall we say… “particular age”, I would venture a guess that you were enthralled by the 1991 box office hit, Robin Hood: Prince of Thieves. Kevin Costner was at the pinnacle of his hotness, inducing swoons of delight as the prodigal son returned home. With a stellar cast, Robin Hood: Prince of Thieves managed to solidify Costner as a movie star, gifted us with a young, adorable Christian Slater and also scripted Alan Rickman an over the top performance that won him a BAFTA award.

Robin of Loxley is an English noble who returns home after fighting for his King and country in the crusades. World weary, his homecoming is marred by the death of his father, the looting of his property and the crippling rule of the Sheriff of Nottingham (Alan Rickman). Fleeing from the Sheriff and his guards, Robin encounters families who live in Sherwood Forest. Combining their efforts, Robin trains the men (and some kickass women) and together they (say it with me) steal from the rich to give to the poor. Tale as old as time. Oops, wrong franchise.

I have more reason to hate you than anyone. Yet I found myself daring to believe in you. And what I want to know brother, is will you stay with us and finish what you started?

In any case, while dodging the Sheriff, Robin finds time to romance Marion (Mary Elizabeth Mastrantonio) to the strains of Bryan Adams’ Grammy Award Winning contribution to the film’s soundtrack, Everything I Do, I Do it For You.

Urm… Kevin Costner. Duh. While he does have an American accent – when his character is clearly British – it’s really par for the course. Alan Rickman is a delight and for all its detractors, Robin Hood: Prince of Thieves is a romantic action adventure classic. Don’t we all remember wishing we could reenact the scene where Marian leans in close and gently blows across Robin’s face, distracting the eagle-eyed archer? Or her bashful peck on his cheek just before disappearing into the mist?

Then there’s that line, you know the one right before Robin sinks to his knees with his ladylove in his arms: “I would die for you”. The gems just keep on coming.

Content note: Robin Hood: Prince of Thieves is rated PG-13 for mild violence and some scenes of a sexual nature. 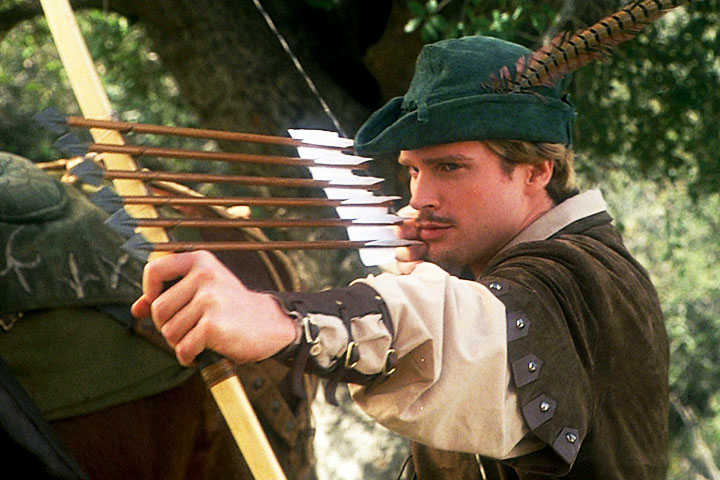 In 1993, Mel Brooks decided he had had enough of Robin Hood told in a very serious and dramatic way. He was determined to try his hand at comedy – a spoof to be exact. Using Robin Hood: Prince of Thieves, The Adventures of Robin Hood and Disney’s Robin Hood as inspiration, Brooks created what I consider to be a hilarious take on the Robin Hood mythos.

Running almost in parallel with Robin Hood: Prince of Thieves, Robin (Cary Elwes) returns home to find home and hearth in ruins. In the case of Men in Tights, his home is being repossessed, but that’s a minor detail. Left with nothing to his name, Robin is gifted one thing – a key his father left him that opens “the greatest treasure in all the land”. In an attempt to regain his land and dethrone his enemy, Robin meets his merry band of misfits – including Little John (Eric Allan Kramer), Will Scarlett O’Hara (Matthew Porretta), Ahchoo (Dave Chappelle) and of course, Maid Marian (Amy Yasbeck). There’s an archery tournament, spoof upon spoof, a duel and many men running around in – you guessed – tights.

Let’s face it. You’ve gotta be a man to wear tights!

“The greatest treasure in the land” is a running joke throughout the film and if you give it a little thought, it’s not too hard to figure out why.

I don’t watch comedy. At all. Despite the fact that I laugh at most everything, comedy is a genre I don’t care for. And yet this film – perhaps due to the strong nostalgia factor from the 90’s – remains a favourite. In truth, the film is absurd. But it never pretends to be anything other than absurd. Which translates into something kind of wonderful. Cary Elwes is funny and adorable as Robin and he is supported by a cast who are all in it to win it with this one. Amy and Cary have very good chemistry and entertain as their romance progresses. The final scene in this film, in particular, had me in stitches.

Robin Hood: Men in Tights is an oddball, slapstick, really entertaining film, but be warned, its humour is not for everyone.

Content note: Robin Hood: Men in Tights is rated PG-13 for using humour related to race and gender in a satirical manner. Many of the jokes involve sexual innuendo. 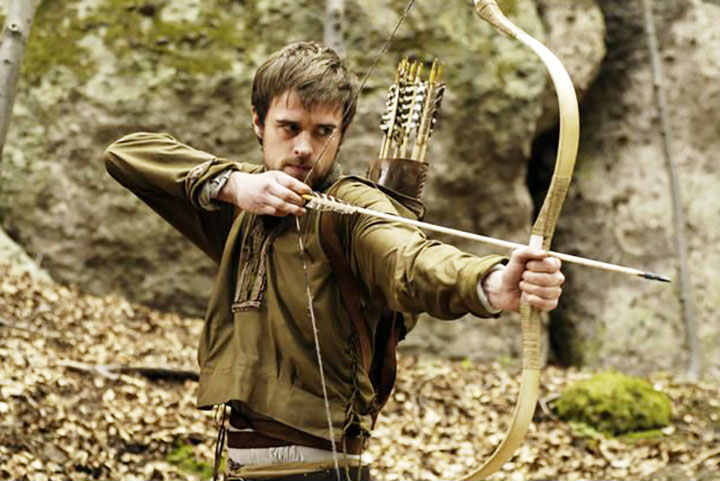 In 2006, the BBC tried their hand at bringing Robin Hood to the small screen. They cast Jonas Armstrong as the titular hero and – brace yourself – a young Richard Armitage as Guy of Gisbourne. He wears leather guys. A lot of it. Whether you watched the show for Robin, Marian or Guy, the eye-candy on display is in no short supply. Well done BBC! Making sure the basics are in place.

Robin, crusades, stolen lands, revenge, outlaw. See? The bases are all covered. Where the films that came before it generally glossed over the supposed villains in the story, Robin Hood gives life, a personality and a backstory to Guy of Gisbourne. No wonder so many fans rallied behind the sometimes vicious, sometimes tortured Sheriff. Lucy Griffiths plays Marian, Robin’s childhood sweetheart who finds herself at the mercy of Gisbourne. Kudos to Armitage, Armstrong, and Griffiths because this triangle had chemistry shooting three ways!

I must say, you are, more than ever… your eyes, even when you look at me in anger… I feel you. And I still believe, even after all this time… you can see into my soul.

As the series progresses, Robin and his posse of nonconformists thwart the sheriff, bond in the forest while doing their stealing for the good of others routine. Robin Hood, especially its first season, is incredible fun. The show lasted three seasons before it was canceled.

If you don’t mind your period drama with a dash of something not quite period appropriate, you will love Robin Hood. The series utilised various costuming and language anachronisms which might annoy a period purist. In 2006, the series was refreshing and stylistically interesting. Robin Hood is a little-known gem that not many people remember, but should really give a chance. The show tries, not always successfully, however, to comment on social injustice and agrarian economics. Robin Hood skirts the line between action/adventure and light spoof.

Whether a prince of thieves, a noble rogue or a thieving pacifist, Robin Hood is one of my favourite heroes. He’s generally romantic and noble, with just a dash of the rogue. And let’s be real… choose your poison in terms of your best casting choice for Robin. But irrespective of who’s doing it, when he raises his bow and arrow and displays his skill and prowess with the weapon, it’s all kinds of swoon.

While there are numerous adaptations, these three compete as my top favourites and the rating below reflects all 3 retellings. Therefore I’m excited about the very real possibility that Robin Hood will be revisiting our screens in the not too distant future!

Have you watched any of the aforementioned Robin Hood movies? Do you have a favourite version on the big or small screen? Comment below and let me know!

Our romance-themed entertainment site is on a mission to help you find the best period dramas, romance movies, TV shows, and books. Other topics include Jane Austen, Classic Hollywood, TV Couples, Fairy Tales, Romantic Living, Romanticism, and more. We’re damsels not in distress fighting for the all-new optimistic Romantic Revolution. Join us and subscribe. For more information, see our About, Old-Fashioned Romance 101, Modern Romanticism 101, and Romantic Living 101.
Pin this article to read later! And make sure to follow us on Pinterest.
By Naazneen Samsodien on June 9th, 2017