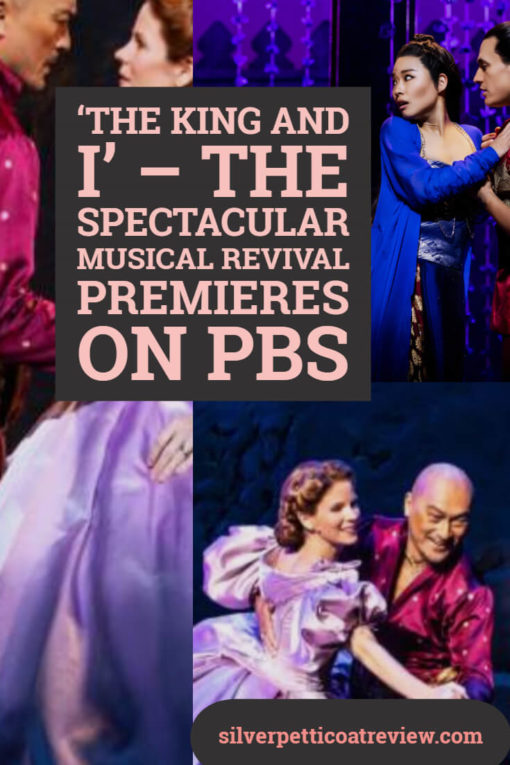 Ken Watanabe and Kelli O’Hara shine in The King and I, an epic Tony-award winning romantic musical.

The King and I on PBS – The Broadway Revival

I was lucky enough to see the Lincoln Theater production in person but with a different cast. In 2016, I enjoyed performances from the Broadway legend Marin Mazzie and TV favorite Daniel Dae Kim in the primary roles. They were fabulous, as was the grand set design.

Oh, and the costumes were simply spectacular. But what stood out was how romantic the revival was. Some versions don’t emphasize the epic love stories, but this version does in the loveliest and swooniest of ways.

Now, years later, everyone gets the chance to watch one of the greatest musical revivals in recent years. Sure, this particular performance was filmed at London’s West End, but it’s still the same revival. Trust me; this is one musical experience you don’t want to miss.

Based on a true story, the year is 1862, and East and West collide when British schoolteacher Anna Leonowens arrives in Siam (modern day Thailand) to take up her post instructing the royal household of children from the King’s several wives. Despite her sharp wit and strong will, nothing has prepared Anna for the lessons this rich and complicated new land has to teach her—or for the powerful connection she will forge with its imperious but conflicted King.

The production was recorded in London’s West End in 2018 and starred the original Lincoln Center Theater cast. Ken Watanabe plays the King, and Kelli O’Hara plays Mrs. Anna. She won a Tony for her performance on Broadway. Also, starring is Ruthie Ann Miles as Lady Thiang, who won Best Featured Actress in a musical at the 2015 Tony Awards.

Where to Watch: Great Performances: Rodgers & Hammerstein’s The King and I

The King and I premiere is this Friday, November 8, 2019, at 9 pm on PBS. Make sure to check your local listings. It’s also available to stream on PBS Passport.

Have you seen The King and I musical? What are your thoughts on this classic historical romance? Let me know in the comments.