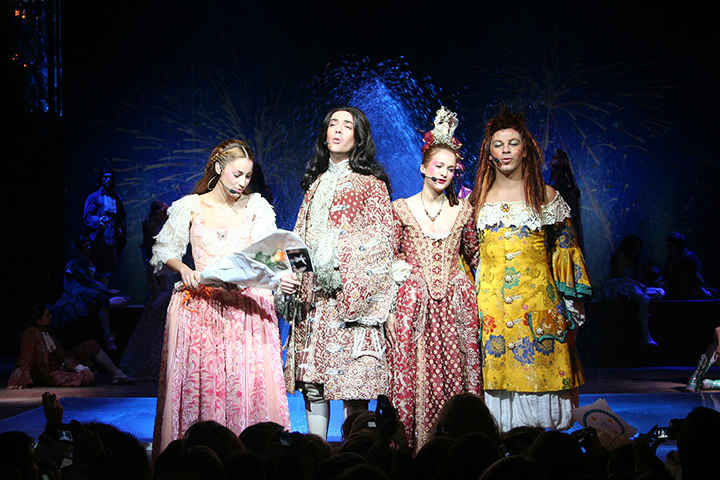 YouTube is a veritable rabbit hole that contains many wonderful delights. I always have the best time when I’m in the middle of a hop, skip, jump session. By that I mean, you start somewhere and due to recommended videos, end up somewhere over the rainbow. By accident, I happened across a video thumbnail of a handsome young man. The music video was from the French play Le Roi Soleil. The song was the lead single from its incredibly successful soundtrack, Je Fais De Toi Mon Essentiel. Consequently, I tumbled into a two-year obsession with Louis XIV, the French language and Le Roi Soleil.

Le Roi Soleil is a musical (and surprising comedy) that premiered in France during September 2005. It ran for two years to sold-out crowds in Paris.

The play dramatizes the life of Louis XIV, a monarch of the House of Bourbon who ruled as King of France and Navarre for 72 years!

Known as The Sun King, his spectacular creative vision is responsible for one of the most incredible UNESCO World Heritage Sites on the planet, the Palace of Versailles.

Le Roi Soleil focuses primarily on The Sun King’s romantic relationships with three women – Marie Mancini, Françoise-Athénaïs (Marquise de Montespan) and Françoise d’Aubigné (Marquise de Maintenon). In addition, it also references the construction of Versailles (his greatest legacy) and the French Civil War. And finally, the show also touches on the mystery of The Man in the Iron Mask and The Poison Affair. These were two controversial events during Louis XIV’s reign.

Le Roi Soleil opens with the French Civil War as the Duc de Beaufort and Isabelle rally the French people towards rebellion. But their victory is short-lived as they lament the loss of life with the stirring ballad Qu’avons-Nous Fait De Vous.

We are of those who have opened another path, a new era. We’re the echo, the breath of all those that have fallen.

The first close-your-mouth-you’re-catching-flies moment, however, is when we finally meet Louis XIV (Emmanuel Moire). He appears amidst stars on the darkened stage as the music swells. It’s his coronation and Emmanuel sings the stirring Etre A La Hauteur as he is crowned King. It is a spectacular scene, followed by another as Monsieur takes the stage with his opening song, Ca Marche, commenting on the dog-eat-dog world at French court.

In addition, Louis and Marie have a delightful little ‘meet cute’, followed later by one of the first act’s most beautiful ballads, the love song Je Fais De Toi Mon Essentiel. But the play has darker tones too. The saga of The Man in the Iron Mask, though briefly dealt with, is stirring and incredibly emotional as lovers Beaufort and Isabelle belt out Entre Ciel Et Terre. Similarly, The Poison Affair has a wonderful scene between Louis and Françoise-Athénaïs. The first time I saw the play, I admit I got a little misty-eyed by their tense, emotionally charged exchange.

Sir, I have no defence other than my love for you, and if I’ve sinned, I don’t have any regrets; my only one is to have lost your love.

And lastly, after the darker turn, the show returns to the light. The final two songs are the highlights of last act. La Vie Passe and the final song sung by the entire cast as a farewell, Tant Qu’on Reve Encore.

A musical, any musical, cannot survive if the talented cast does not have the skill to make their performances memorable. Louis XIV is the star of this show and the role went to French singer/songwriter, Emmanuel Moire. Though he is a singer first and an actor second, it makes no matter. Emmanuel is fantastic as Louis, taking the audience on an impressive journey from the battlefields of the civil war, the stirring of first love, to his spectacular coronation as King of France. His work on Le Roi Soleil was so lauded, he was able to launch a successful solo career after the play had wrapped.

Louis XIV’s love interests are beautiful, but very different women. Marie Mancini (Anne-Laure Girbal) is innocent, soft and sweet and her voice it seems lends itself to that aesthetic. Lysa Ansaldi (Madame de Montespan) is the King’s most famous mistress and the actress cast has a voice able to convey the seduction and mystery that characterizes who she is. Cathialine Andria plays Madame de Maintenon, a God fearing, honest women whose faith, love and devotion help Louis discover his true purpose.

RELATED: A Little Chaos Review – Love in the Gardens of Versailles

Merwan Rim is the Duc de Beaufort, a leather-clad rock star who leads the Civil War. He is more pirate than nobleman (despite being Louis first cousin) and brings an edge to the production with both his dark guy-liner and his vocals. Along with his lover Isabelle (Victoria Petrosillo) who has an incredible voice – the strongest among the female cast – they fight for the soul of France and against the greed of the nobility.

And last, but definitely not least, Christophe Maé is almost solely responsible for the comedy. As Philippe I, Duke of Orléans, he is the King’s brother and the most colourful character in the play. If you know a little about the historical Monsieur, as he was affectionately fashioned, he was notoriously effeminate. The production takes full advantage of this historical tidbit by giving him the most amazing costumes. For example, he has a Mohawk. And dreadlocks. Mohawked dreadlocks. I know. You have to see it to believe it! He is fabulous though. Fah-bu-lous!

The music is what initially drew me in. The soundtrack is a mixture of pop/rock and strong romantic and soulful ballads. Having sold more than a million copies, I think it’s safe to say that these are incredible songs. Je Fais De Toi Mon Essentiel, La Vie Passe, Tant Qu’on Rêve Encore and Etre A La Hauteur are standouts, but those are just my personal favourites. The entire production is sprinkled with hits. As proof, the soundtrack is the two-time winner of the NRJ Music Awards, the French equivalent of the MTV Music Awards.

When it comes to musicals, I generally don’t need much convincing. Anytime anyone is singing anything, I’m there with bells and whistles. The fact that this play is in a foreign language is really no stumbling block at all. The costumes and the music are spectacular and its very easy to see why the production was so well loved.

Fun fact: I loved this play so much that I studied French for a year to fully understand it! Yes, I loved it that much!

The only negative is the editing of the DVD. By all accounts, the production values and the choreography are incredible. The editing of the play, however, makes it difficult to always fully experience the magic of the entire production. There are many times when I’m marveling at something in the background – a dancer, an acrobat swinging across the stage (yes, there are those) or a fountain in the middle of the stage – and the camera cuts away to something else. It’s a little frustrating. Having said that, it’s my only negative.

Le Roi Soleil is a spectacular show with incredible music, production values, and a talented cast. While it is not a faithful retelling of Louis XIV’s life, it’s close enough to some of the historical context, while having fun with some of the more speculative aspects.

Where to Watch: Le Roi Soleil is available for sale on Amazon (although it’s currently not in stock) and can also be streamed on YouTube. Finding an English copy is difficult, although the English transcript is available online. The soundtrack can be purchased on Amazon or iTunes.

Content Note: This musical is safe for family viewing.

Have you watched Le Roi Soleil or any other film adaptations of Louis XIV’s life? If you have, what did you think? Comment below and let me know!

Our romance-themed entertainment site is on a mission to help you find the best period dramas, romance movies, TV shows, and books. Other topics include Jane Austen, Classic Hollywood, TV Couples, Fairy Tales, Romantic Living, Romanticism, and more. We’re damsels not in distress fighting for the all-new optimistic Romantic Revolution. Join us and subscribe. For more information, see our About, Old-Fashioned Romance 101, Modern Romanticism 101, and Romantic Living 101.
Pin this article to read later! And make sure to follow us on Pinterest.
By Naazneen Samsodien on May 25th, 2017