Millions of people around the world adore Anne of Green Gables. Thanks to L.M Montgomery’s series and numerous film and television adaptations, Anne, along with Matthew and Marilla Cuthbert, Diana Barry and Gilbert Blythe are so familiar as to almost be part of people’s lives.

I am no exception to this. I’ve never read Montgomery’s entire Anne series all the way through. But I have seen Sullivan Entertainment’s television series so many times I have it memorized. Anne and the gang almost feel like my own friends and family.

When I learned that a prequel about Marilla’s early life was available, I was thrilled. At the same time, I was also anxious. With a story as beloved as Anne of Green Gables, one hopes that a new author remains true to the original author’s voice and also to the characters themselves. This is not always guaranteed. But I am happy to say that Sarah McCoy’s Marilla of Green Gables managed to achieve the almost impossible.

ABOUT Marilla of Green Gables 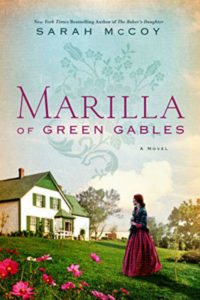 Marilla of Green Gables takes us back in time before the arrival of a red-headed orphan. It introduces a thirteen-year-old Marilla, her twenty-one-year-old brother Matthew and their parents. Green Gables has just been built and Avonlea is the same small community we all know and love. Some of the family names will be familiar to Anne fans, proving that Avonlea residents run generations deep. We also meet Marilla’s new friend Rachel White, her Aunt Izzy, and a young John Barry.

“Rachel had never been one to appreciate any disciplinarian outside of herself. Bending to someone else was not a gift of the White spirit.”

The book follows Marilla through her teenage years as she experiences change, tragedy, and responsibility. The last third of the book skips ahead twenty years to show the main characters as adults. Although Marilla is the book’s focus, we also experience plenty of her brother Matthew, the future Rachel Lynde as well as the future father of Gilbert Blythe.

Author Sarah McCoy has done an amazing job honoring L.M Montgomery’s voice and characters. Re-visiting Avonlea at an earlier time is a seamless experience. Though the residents are different, there is that same feeling of meeting people who are familiar, the same pace of life and personal routines.

RELATED: Anne of Green Gables – Behind the Scenes

There are answers to questions I never thought to ask, such as the origin and meaning of Marilla’s name. I appreciate how McCoy expands on matters that were mentioned or accepted without a thought in Montgomery’s series.

For instance, she gives us the origin and personal value of the amethyst broach, Matthew’s experience or lack thereof in courting, the genesis of Rachel and Marilla’s friendship and, of course, the development of Marilla’s relationship with John Blythe. There’s even a deeper explanation about Tories and Whigs to set a foundation for Anne’s future winter evening conversation with Matthew.

“You don’t got to see eye to eye with people to love them.” – Matthew

But McCoy also fleshes out these characters, giving them new experiences that help shape their lives and relationships. These are all people we know, but now we meet them before the firm formation of their personalities. Then we watch as they mature into the characters we know and love. It feels true and real.

“It’s a choice we make every minute. What truths are important enough to say aloud and what ones are important just to know. That’s the power. You’ve got to be discerning. You can change your mind anytime you want, but you can’t take words back. Not ever.” Matthew to Marilla

I also found it interesting how so much of Marilla’s story echoes Anne’s later one. She too finds a bosom friend (though she doesn’t call it that), has a mishap while making pudding and, of course, has a hot and cold relationship with a Blythe male. She also experiences difficulties with her temper and holding her tongue.

While some of their experiences are similar, they also feel unique, because of their very different natures. Marilla is naturally cautious. She keeps her thoughts to herself and stays busy as a way to avoid feeling too much. Some of this can be attributed to growing up in a family that doesn’t communicate, even though there is a lot of love. I appreciated the writer’s perspective of Marilla because she explains so much I always wondered about.

“Time had taught her to siphon emotion: hold back the hard and let through the soft. Curiosity was as much as she allowed herself to feel. Anything more and she’d have to feel it all again.”

My fears of sequels/prequels not written by the original author proved unfounded with Marilla of Green Gables. This book not only honors Montgomery’s series but is also an easy and engaging read. The story itself is captivating and one I would have enjoyed even without all the history attached to its’ characters. I even found myself getting interested in the Canadian political issues that alternately inspire or enrage the residents of Avonlea.

I highly recommend Marilla of Green Gables for those who want to know more about the Cuthberts and other residents of Avonlea. For those who are unfamiliar with Anne of Green Gables, this novel stands on its’ own feet with well-written characters and plot lines.

Can I just say, yes, please?! Any adaptation whether film or series would be welcome. Fans all over the world are always eager to re-visit Avonlea and Green Gables. I imagine an onscreen adaptation would be well received.

Content Note: Though this book mentions death, the descriptions are not graphic and there is nothing objectionable in this story. Rather Marilla of Green Gables carries a faith thread due to the Cuthbert’s Presbyterian faith.

Our romance-themed entertainment site is on a mission to help you find the best period dramas, romance movies, TV shows, and books. Other topics include Jane Austen, Classic Hollywood, TV Couples, Fairy Tales, Romantic Living, Romanticism, and more. We’re damsels not in distress fighting for the all-new optimistic Romantic Revolution. Join us and subscribe. For more information, see our About, Old-Fashioned Romance 101, Modern Romanticism 101, and Romantic Living 101.
Pin this article to read later! And make sure to follow us on Pinterest.
By Brittaney B. on April 17th, 2019

2 thoughts on “Marilla of Green Gables: An Excellent Prequel to a Beloved Series”