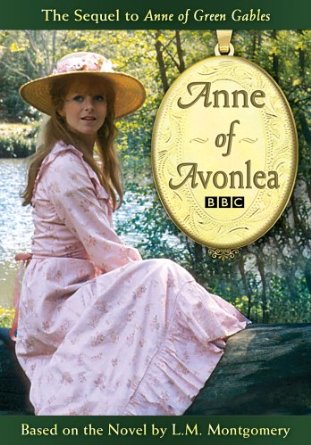 Warning, here be SPOILERS for book and film.

We all know the story of Anne of Green Gables; the imaginative redhead who was always getting into scrapes, no matter what she did. Most of us grew up with Anne, and I always appreciated how her scrapes just changed as she got older. I also thought it was funny, in the later books, that when she and Gilbert were dealing with the scrapes that their children got into that those predicaments seemed familiar (Di Blythe tries to die her hair at one point, I believe).

The first book in the Anne Series by L.M. Montgomery was published in 1908 and is set in Canada, namely on Prince Edward Island. The rest soon followed. The first six books follow Anne from her childhood to adulthood. Books seven (Rainbow Valley) and eight (Rilla of Ingleside) focus on Anne and Gilbert’s children while book nine, The Blythes Are Quoted (complete) or The Road to Yesterday (abridged), focuses on the family after the events of Rilla of Ingleside.

According to Amazon, The Blythes Are Quoted reached the publisher on the same day the author died and it was the last book that L.M. Montgomery finished. It’s actually a very expensive book (but looks like it is well worth it).

I want to clarify, I love both of these films, but the sequel always bothered me. I think that was because my favorite book in the series is and has always been Anne of the Island, a story that is almost completely glossed over in that adaptation.

I had finished my yearly Anne reread when I thought that I would try to find a film adaptation of the third book.  A quick search turned up BBC’s 1975 production of Anne of Avonlea, starring Kim Braden as Anne and Christopher Blake as Gilbert. There was also a production of Anne of Green Gables with the same cast that has been lost. However, this mini-series did not disappoint.

Anne of Avonlea combines Anne of Avonlea and Anne of the Island. Though the Anne of the Island story feels a bit cramped, we do get to see Phil Gordon, Roy Gardiner, Patty’s Place, Ruby’s death, and the place Anne was born. Although I wished it was longer, it was nice to see that portion of the story in the film. Maybe someday, it will get its own miniseries?

This Anne of Avonlea storyline, however, was amazing. Some of the actors seemed a little wooden at times, but I think that might have been a reflection of the production quality, not the actors themselves. The other thing that was odd was that at times it sounded like the actors were all British but trying to cover up their accents and sound Canadian. Since it’s a BBC production, that makes sense, but it was interesting to listen to and could be a touch jarring at times.

Still, I really enjoyed following Anne while she was teaching school, her misadventures with the AVIS (Avonlea Village Improvement Society), Dora and Davy Keith, Mr. Harrison, the people at Echo Lodge, and, of course, Anne’s ever-confusing feelings for one of her best friends, Gilbert Blythe. I almost wish that the entire series had been based on this one book, with a second series for Anne of the Island.

Kim Braden as Anne was something I was really unsure about going in because I love Megan Follows as Anne. But Braden did not disappoint, and I think that she might fit the way I imagined Anne to look in these two books better than Follows did in the sequel (I know, it’s sacrilege to say that).

Braden has the willowy elegance and is able to portray that in her Anne, combined with an overactive imagination and flights of fancy. However, she was also able to appear grounded, in what I thought was a good balance of the two parts of Anne’s personality. Her reactions to all the marriage proposals were pretty much how I imagined them when reading the books.

Jan Francis as Diana was also a great foil for Braden’s Anne, and the quiet understated elegance fits very well with how I imagined Diana would behave in these two books. The two of them played well off of each other, and scenes with Anne, Diana, Fred, and Gilbert were funny and on point with how I imagined those characters interacting.

Kim Braden’s chemistry with Christopher Blake, who played Gilbert, was believable. I believed them as best friends and as a couple in love. The only thing I had against Blake’s Gilbert (other than the fact that he wasn’t Jonathon Crombie), is that he and Anne sometimes got into arguments and he had a bit more of a temper than in the books. The actor uses it well and it’s not overbearing, but it wasn’t what I was expecting. Especially in the proposal scene.

Of course, there were problems. The proposal scene was close to how it happened in the book, but still wrong, and the ending was also a little off. These film adaptations keep basically ending with Anne at Gilbert’s bedside, and he had such great dialogue at the end of the book that isn’t ever used! (I feel like I should repeat here, however, that I love all these film adaptations, I just adore that book).

In the second half of the series, there was also a new subplot involving Anne’s birth certificate and how Roy’s mother was looking for it. It worked, because it got us to Anne’s childhood home but seemed a touch out of place. The main purpose it served was to remind Anne how much Gilbert meant to her, not bad, but different.

The Anne-Gilbert romance was beautifully built and set up as the story progressed, and we could see Anne struggling with her feelings. It reminded me of the part in Anne of Avonlea where she is designing her House of Dreams and Gilbert is just there, hanging out and helping her furnish things, but she can’t figure out why he’s there until the end of Anne of the Island.

As far as adaptations go, Anne of Avonlea is solid. It fits well after the 1985 Anne of Green Gables and adds something new to the existing film work. I realize that’s ironic because it came first, but I think it’s an often forgotten work. While it’s not a perfect adaptation of Anne of the Island, it still hits the high points. It’s really an underrated and often forgotten gem of a film that fits the overall story of Anne. Available on Amazon for purchase or for rent on Netflix, it’s well worth the time it’ll take to track down.

Have you seen BBC’s Anne of Avonlea? What did you think? Do you think the time is ripe for a new Anne series? Let me know!

Our romance-themed entertainment site is on a mission to help you find the best period dramas, romance movies, TV shows, and books. Other topics include Jane Austen, Classic Hollywood, TV Couples, Fairy Tales, Romantic Living, Romanticism, and more. We’re damsels not in distress fighting for the all-new optimistic Romantic Revolution. Join us and subscribe. For more information, see our About, Old-Fashioned Romance 101, Modern Romanticism 101, and Romantic Living 101.
Pin this article to read later! And make sure to follow us on Pinterest.
By Bailey Cavender on December 5th, 2015