Charles Dickens is one of the most famous authors in English literature. His works are also a popular source of period drama adaptations for film and television. Even those who have never read his works (such as myself) can rattle off a list of his book titles with little thought.

His name is also inextricably linked with that merriest of all holidays, thanks to a little novella called A Christmas Carol. This touching transformational tale of the miser Scrooge, who is visited by three ghosts on Christmas Eve may be one of the most adapted books in history. Scarcely a decade goes by without a new film or series telling this tale. Not to mention its’ perpetual use in theater productions. But never, has the story been told quite like it is in The Man Who Invented Christmas.

THE MAN WHO INVENTED CHRISTMAS SYNOPSIS 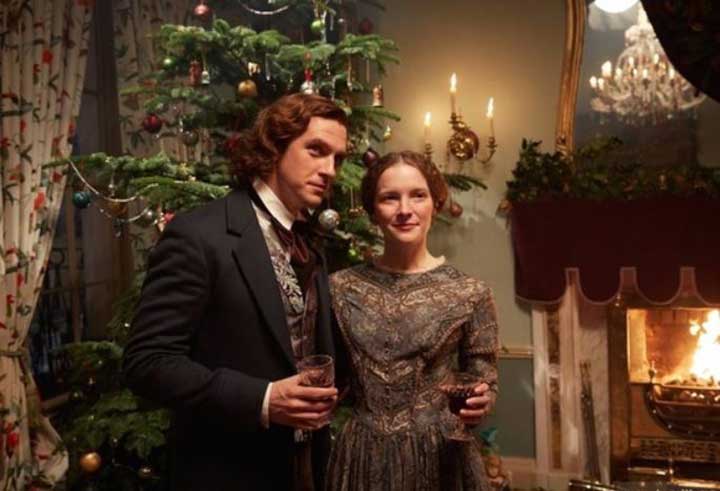 The Man Who Invented Christmas gives a new and welcome spin to A Christmas Carol by telling its’ creation through the eyes of the author Charles Dickens. Despite his previous publishing success, Charles Dickens is in financial straits. With a growing family, an expensive new London townhome and a spendthrift father, funds are very limited. His most recently published books haven’t been as successful.

For this reason, his publishers are hesitant to back a new book. Not to mention, Dickens is struggling with writer’s block. Dickens’ close friend/agent, John Forster, encourages and supports him through his difficulties until inspiration strikes. Despite the lack of demand for a holiday story, Charles Dickens insists it is a tale that needs to be told. As such, he decides to self-publish putting his family in even further financial peril.

As Dickens writes his story, he faces several challenges. There is the growing disconnect between himself and his neglected wife. Another battle he faces is with his main character, Scrooge, who challenges him more than he expects. A third is a fractured relationship with his father who unexpectedly arrives for a visit. This also forces Dickens to wrestle with the ghosts of his own past history. It creates an intriguing intertwinement of the author’s life with that of his character.

THE MAN WHO INVENTED CHRISTMAS REVIEW

Many authors say that they put pieces of themselves into their work. So, it is thrilling to see such a thing play out on screen. Though I don’t know how true to life it is, I loved seeing Dickens’ memories, history, and inspirations woven into Scrooge’s story. As a lover of names, I was especially pleased with Dickens’ habit of making note of unusual names for later use in his novels. I also enjoyed seeing his friends and family as the faces for his book characters.

I’ve always thought of Charles Dickens as a rather staid, reserved man, but Dan Stevens plays him with an almost manic edge to his character. Strangely, this does not detract from his performance. It took me two viewings to realize that his Dickens is not all that likable and rather self-absorbed. He takes his wife and agent friend for granted and can’t forgive his father his failings. His character is humanized by his delightful interactions with the family’s young Irish maid, whose love of story inspires him. Dickens personal pain also serves to engender compassion for a man still chained to his past.

It’s rather jarring to see Scrooge portrayed by Christopher Plummer, the man who will always be Captain Von Trapp to me. Somehow, his characterization is the most human I’ve ever seen Scrooge on screen. He is still dour and miserly but also displays unholy glee as he ribs his creator. Fans of British productions will also recognize beloved character actors Jonathan Pryce, Miriam Margolyes, Simon Callow, and Ian McNeice. Each makes appearances in this movie.

One of the great pleasures of The Man Who Invented Christmas is its’ visual beauty. The London displayed here is a Dickensian dream, mixing the bleak world of the poor with the clean wealth of the upper crust. Is it realistic? No, but who cares! I particularly adore the rich colors used in the Dickens home, from the front door to the haven of his attic library. Book lovers, like me, can only drool over the haphazard, cozy warmth of that library.

At heart, this particular Christmas film is one of forgiveness and redemption. It’s the way these sentiments are conveyed which makes it both special and heartwarming. The simple message that “No one is useless in this world who lightens the burden of another,” is one which will have you counting your blessings and gathering your loved ones close. The Man Who Invented Christmas is sure to become a personal favorite of all those who watch it.

Where to Watch: Stream on Amazon Prime, Rent or buy on Amazon, YouTube, Vudu or Google Play

Content Note: The Man Who Invented Christmas is rated PG

What do you think about The Man Who Invented Christmas? Sound off below…

Our romance-themed entertainment site is on a mission to help you find the best period dramas, romance movies, TV shows, and books. Other topics include Jane Austen, Classic Hollywood, TV Couples, Fairy Tales, Romantic Living, Romanticism, and more. We’re damsels not in distress fighting for the all-new optimistic Romantic Revolution. Join us and subscribe. For more information, see our About, Old-Fashioned Romance 101, Modern Romanticism 101, and Romantic Living 101.
Pin this article to read later! And make sure to follow us on Pinterest.
By Brittaney B. on December 3rd, 2018

2 thoughts on “The Man Who Invented Christmas: An Uplifting Take on a Dickens Classic”