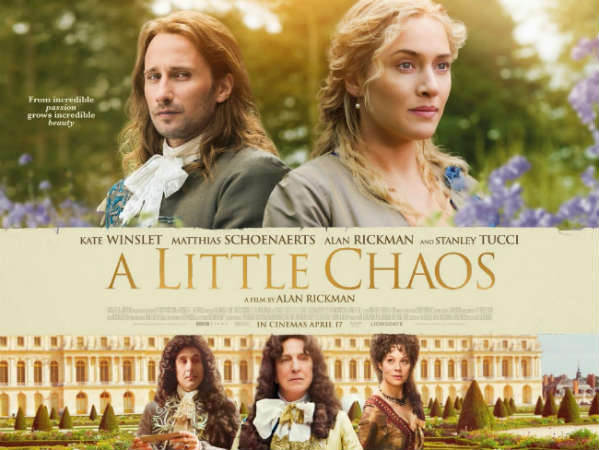 Anyone with fond memories of Alan Rickman and Kate Winslet in Sense and Sensibility will be glad to see them reunited in this period film, directed by Rickman himself. The films tells the story of a female landscape gardener, Madame de Barra (Winslet), who helps Louis XIV (Rickman)’s famous gardener Andre le Notre design the gardens of Versailles.  Unhappy in his own marriage, le Notre (played by the rather ravishing Matthias Schoenaerts) can’t help but be intrigued by this unconventional figure, who seemingly prefers chaos to order.  But as the two grow closer, we discover that Madame de Barra’s competent exterior covers a deep grief and guilt she can’t bear to face.  If she opens her heart (as le Notre opens his orderly designs to her chaotic influence), will her emotions become a flood that engulfs her?

I was keen to see this film because I visited Paris and Versailles in 2013, the year of le Notre’s 400th birthday.  (Sadly, I didn’t get around to seeing the specific garden that features in the film. Versailles is huge.  Huge.  You have to see it to appreciate its immensity).  I don’t think the real Andre le Notre was quite as hot as Matthais Schoenaerts, who smolders throughout the film with an intensity that gives Ross Poldark a run for his money.  Within about two minutes of his being on screen, I wanted him to kiss someone.  Anyone.  Kate Winslet is also lovely.  What I like most about her is that her beauty is natural.  She’s not afraid to show her true age, and is all the lovelier for it.  In the course of the film, we also see her mucking in with a will, sawing at branches and hefting planks of wood.  While wearing an 17th-century dress.  Beautiful.

This is a grown-up film about grown-up people with complex lives.  As well as Madame de Barra and le Notre, we get insight into the lives of Louis XIV, his wife and mistresses.  (Athenais, Marquise de Montespan is played by Jennifer Ehle, Lizzie in the BBC’s Pride and Prejudice).  And the unconventional love life of the Duc d’Orleans (the scene-stealing Stanley Tucci).  It’s quite a slow-moving film, with a lot of lingering, half-focused camera shots of plants, windows etc.  And despite being a period film, it’s not what I would call lavish.  The light looks natural, and you often get the impression of dull, chilly weather that you can almost feel.  The film is rich in symbolism, with physical aspects of the garden reflecting aspects of the characters’ personalities.  It’s the sort of film you might need to see more than once in order to fully understand it.  Because of these factors, it might not be for everyone.  But there are also some moments of great passion and danger, that had me gripping the arms of my cinema seat.  Let’s just say that those overwhelming floods aren’t all symbolic.  As Kate Winslet said in an interview, she put the water safety training she got on Titanic to good use! 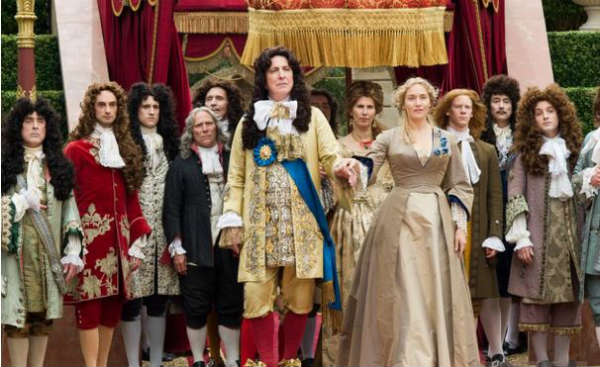 If there’s one thing I didn’t like about the film, it’s that I’m not always sure I believed in Madame de Barra as a character.  As a woman in a man’s world (albeit a widow who needs to make ends meet), I would expect her to encounter more sexism than she does.  People treat her as an interesting curiosity or they respect her, but none of the male characters try to take advantage of her or make suggestive comments at her.  In the 17th century of Louis XIV, I think she would need some sort of weapon, bodyguard, or at least a big dog in order to keep her virtue intact.  Also, I wondered if Kate Winslet was perhaps a bit too old for Matthias Schoenaerts?  Although you do see a lot of older men with younger women in films, so maybe it’s time to redress the balance?

On the whole, though, I liked it.  It’s an interesting film about interesting people, with lovely period detail.  Schoenaerts’ raw silk suit alone probably deserves its own fandom.  I look forward to seeing its wearer in more romantic dramas in the future.

For your information: While the film has been released in the UK and Australia, the film won’t be available in the U.S. until June (EDIT: now available to rent in the U.S.).

CONTENT NOTE: This is Rated R and contains a little sexual content though it is easily skipped over.

“”In vain I have struggled.  It will not do.  My feelings will not be repressed.

Our romance-themed entertainment site is on a mission to help you find the best period dramas, romance movies, TV shows, and books. Other topics include Jane Austen, Classic Hollywood, TV Couples, Fairy Tales, Romantic Living, Romanticism, and more. We’re damsels not in distress fighting for the all-new optimistic Romantic Revolution. Join us and subscribe. For more information, see our About, Old-Fashioned Romance 101, Modern Romanticism 101, and Romantic Living 101.
Pin this article to read later! And make sure to follow us on Pinterest.
By Elizabeth Hopkinson on May 4th, 2015