If you’re not familiar with the babe with the power; if you don’t know that fairies are more likely to bite than to grant wishes, and if you don’t know the exact words to use if you want the goblins to take someone away, you probably are not yet acquainted with the magic of Jim Henson’s Labyrinth, a fantasy classic which has delighted many a whimsical soul since it premiered thirty years ago. Fear not because despite its age, this movie continues to awe viewers and draw in more fans, and it’s not too late to be seduced by the magic.

It’s not surprising that this original story was first born within the astonishing mind of Jim Henson, and several well-known creative minds are entwined in its genesis including George Lucas, who executive produced the film; Terry Jones, of Monty Python fame. who wrote the screenplay, and famed fantasy illustrator Brian Froud who created the film’s complex and unique conceptual designs.

The result was a true fantasy drawing the viewers into a completely different world with its own crazy logic; a genuine fairy tale which blends the inanity with an edge of darkness like all good fairy tales should. Perhaps not surprisingly the movie was not a hit when it first came out, but it hasn’t vanished and instead has captivated the minds of many fantasy fans, growing into a cult classic which doesn’t look like it will disappear from memory anytime soon. 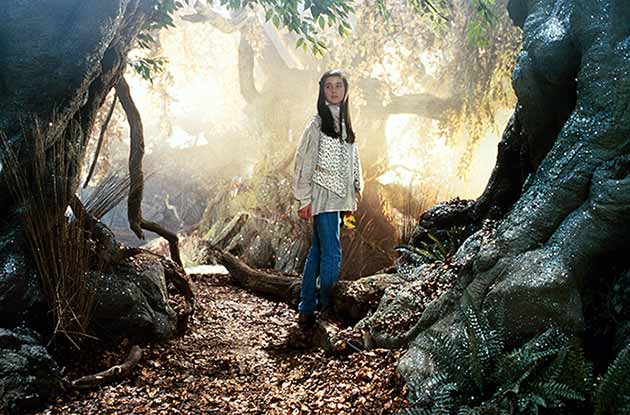 The story centers around a quest, not an unusual theme in fantasy, but this does not follow many of the usual quest elements. Sarah is an imaginative and dramatic teenager preoccupied with acting and annoyed whenever her stepmother tries to wield her authority. She is enraged when her parents leave her home one night to babysit her baby brother Toby, and as she fumes, she continues talking aloud about the last play she was rehearsing, weaving the plot with the story of her life.

Annoyed with her brother, she threatens to tell the goblins to take him away. “I’ll say the words,” she warns the squalling baby. “No, I mustn’t. I mustn’t say….” But of course she does, and the unbelievable happens when Jareth the Goblin King of this story within a story does take away her brother. Of course, he’s doing her a favor. Isn’t that what she wanted? No? Then she has one chance: “You have 13 hours in which to solve the labyrinth,” he says, “before your baby brother becomes one of us…forever. Such a pity.”

Sarah finds herself wandering Jareth’s massive labyrinth to find the castle beyond the Goblin City. Along the way, as with most quests, she is tested. The labyrinth world is greatly inspired by the oddity of Wonderland, and she meets strange creatures who often spout eccentric comments which seem designed to confuse her. There are riddles and shortcuts, obstacles to be overcome and threats to face and of course things are very often not what they seem.

RELATED | “Always together, eternally apart” – The Beauty of the Curse of Ladyhawke (1985)

True to the nature of a quest, Sarah finds friends too in the form of Hoggle the peevish dwarf, Sir Didymus, a little hairy knight who looks like a dog and actually rides a sheepdog, and Ludo, a large hairy ogre creature that can call on rocks. With such companions, in such a place and with such an enemy, this is a quest story you’ll never forget.

As Sarah, a young Jennifer Connelly does a really good job. At first, Sarah’s behavior is theatrical, so even if her feelings about her stepmother are justified, she takes it over the top to suit her love of drama and her self-centered ideas. What is really satisfying to watch though is that once her brother is stolen and her imaginary existence becomes reality, Sarah’s focus shifts from herself. Her goal is to save her brother and despite the difficulties Jareth throws in her path, she rarely becomes discouraged.

Sarah also takes the time to help others along the way and learns from her mistakes. As a story that parallels growing up, she manages to show and develop a maturity on screen very well. Her character is one which many can relate to. Sarah’s desire to cling to a fantasy world is something quite a few of us can understand, and I like that the movie allows her to maintain a connection to faerie even as she accepts that she must let go of some of her childhood. Her love of fairy tales and fantasy also help her adapt in the twisted world of the labyrinth, as she faces the riddles and puzzles which are placed in her path, and in the end, her connection with the other world cannot truly fade.

For those unfamiliar with this movie, you might still be scratching your head at the idea that David Bowie is in it. As Jareth, it should not be surprising that he embodies this character perfectly, most likely because the character shares many of the traits associated with his persona. He is enticing and larger than life and spectacularly dressed. Jareth never wears the same costume twice, and they are breathtaking, high collars, lace, velvet, tight riding pants, feathers, wild makeup…. (Who makes his clothes I wonder? Surely not the grungy, ragged goblins in his employ?)

He is entrancing and threatening at the same time, and he represents the darker side of this fairy story well. After all, there’s temptation and danger in being whisked away to another place by a mesmerizing stranger. Jareth himself tells Sarah, “Fear me. Love me. Do as I say, and I will be your slave.” He tempts Sarah with the dreams and fantasies she’s always craved, but while he seems obsessed with her – just as she might have once wanted, – her focus is now on something other than herself. She is true to her new mature outlook and, she does not succumb.

Even without these fascinating and complex human characters to follow, this movie would be worth a viewing by the visuals alone. Brian Froud has a signature, mischievous, otherworldly style which is evident in these earthy rascally goblins, in Sarah’s various companions and the strange creatures she meets. Jim Henson’s Creature Shop brilliantly brings them to life, and you are left between wonder at how real and natural everything is and speculation at how all this wizardry is done. Creatures of all kinds populate the screen from a giant robot bent on destruction to a tiny worm asking Sarah in to see the missus.

The environment is varied and strange and fascinating. The first look at the labyrinth is breathtaking and forbidding, and Sarah manages to wander not only over it but under it into a Bog of Eternal Stench, an oubliette and even a dreamlike ballroom full of beautiful, fey people in high fashion clothing. Once you enter the labyrinth, you’re truly taken on an unforgettable journey of discovery.

The amazing detail in characters and plot achieve one of the most masterful elements of world building: a sense of a greater story. Jim Henson and his team suggest that there’s so much more to this labyrinth world that we do not know. Sarah passes through it for 13 hours, but there must be so much more to this place. What about the areas she does not visit? Why is Jareth, who looks human, a King of little diminutive goblin creatures? What is his real interest in Sarah? Even the music of this movie suggests that there is more. Of course, David Bowie recorded songs for the film. In one of the best, “Underground”, he murmurs,

But down in the underground

You’ll find someone true
Down in the underground
A land serene
A crystal moon,

It’s only forever
Not long at all
Lost and lonely
That’s underground
Underground!

All these questions cannot be answered in one movie, but this is not necessary or advisable. It’s enough that our imaginations are left awake and animated, and it has for many fans. Jim Henson’s Labyrinth has managed to thrill us for 30 years, and I have no doubt it will continue to do so for at least 30 more.

Our romance-themed entertainment site is on a mission to help you find the best period dramas, romance movies, TV shows, and books. Other topics include Jane Austen, Classic Hollywood, TV Couples, Fairy Tales, Romantic Living, Romanticism, and more. We’re damsels not in distress fighting for the all-new optimistic Romantic Revolution. Join us and subscribe. For more information, see our About, Old-Fashioned Romance 101, Modern Romanticism 101, and Romantic Living 101.
Pin this article to read later! And make sure to follow us on Pinterest.
By Dixie-Ann Belle on September 12th, 2016