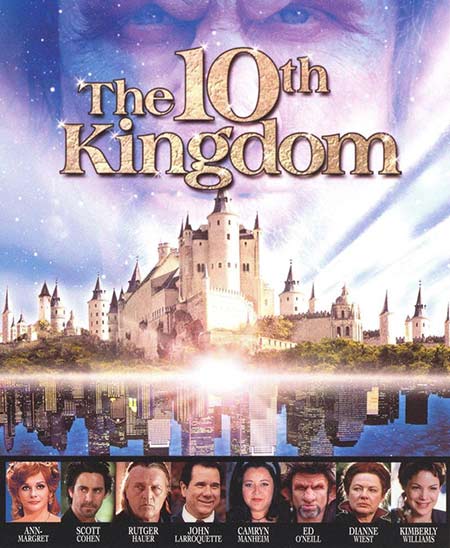 Review of The 10th Kingdom

“Someday you will be like me, you will be a great advisor to other lost little girls.” -Snow White, The 10th Kingdom.

All fairy tales have one thing in common and that is that they are guides for lost little boys and girls. The characters become advisors at the moment children most need them and then to adults when they grow old enough to read them again. I believe it was C.S. Lewis who said, “since it is so likely children will meet cruel enemies, let them at least have heard of brave knights and heroic courage.” That is the purpose of fairy tales and The 10th Kingdom is no exception. It is exactly the sort of story that was meant for the lost little girls in all of us.

The 10th Kingdom is ten hours of truly terrific television for anyone who loves fairy tales, inter-dimensional travel, girl power, or the fantasy genre in general. If you haven’t seen it you should sit down and watch this fantastic miniseries right now, but maybe not all in one sitting. The 10th Kingdom is a five episode miniseries released by NBC in 2000 that focuses mainly on the Snow White fairytale, the original Grimm not the Disney film, but makes use of other fairy tales throughout the five episodes, including Beauty and the Beast, Little Red Riding Hood, Rapunzel, and even a little Cinderella.

The Story of the 10th Kingdom

“I guess you just reach a point in your life when you realize nothing exciting is ever going to happen to you.”

One day while Virginia is on her way to her job as a waitress she hits a golden retriever with her bike. How was she to know that this golden retriever is actually Prince Wendell, Snow White’s grandson who has been transformed into a dog and escaped to our world followed by three trolls and a very charming wolf? Suddenly, Virginia and her father get all tangled up in the political intrigues and fantastical dangers of the nine fairy tale kingdoms.

The series is five episodes long, each very different filled with their own fairy tale delights.

We’ll start with what makes this series great.

What 10th Kingdom does really well is building off of the classic Grimm tales. We meet very few of the original characters but almost all of their descendants. Instead of Little Bo Peep, we meet her great-granddaughter, Sally, the easiest shepherdess in tow, and we spend a considerable amount of time with Prince Wendell, Snow White’s spoiled grandson. He’s been turned into a dog and it is hilarious. All of the characters are pretty great, even the villains. I almost root for the evil Queen when I watch it and would if she wasn’t facing off against Virginia, one of the best heroines of all time.

I stand behind my statement that Virginia is one of the best heroines out there. She is a reluctant hero but is clearly good; making decisions that might harm her and her group but are the Right decisions. She even saves the huntsman from Wolf’s ax because he is helpless. Virginia is also smart and brave. What I love most is that the series is not about her being a damsel but her becoming a hero.

The relationships portrayed between the characters looked like real relationships too. Tony, Virginia’s father is not a perfect father but he is a great one. He tries to protect her throughout the story and provide for her, even when he doesn’t know how. Tony is in no way a perfect hero; he’s oafish and selfish, but he is noble. However, the thing that truly makes Tony great is the fact that he is constantly questioning fairy tale logic like asking the blind axman, “What sort of twisted upbringing did you have?” When he had to guess the axman’s name in order to save Virginia.

The fairy tale world is called the 9 kingdoms (spoiler, our world is the 10th kingdom) and is beautifully imagined. It is more than just an enchanted forest; it is a whole world with history and cultures of its own. All of the small details of well-loved stories come out in the cultures of the 9 different kingdoms. Queen Riding hood  wears a red cloak, at midnight every ball had a Cinderella Waltz, the Peeps were the best farmers in the land, and, my personal favorite, there is a whole town built around the spot where Prince Charming kissed SnowWhite. What we consider stories are great moments in history to the characters of this world.

There were, of course, things that I thought could have been better. A few plot points with the evil queen could have been explained better, like how she became queen in the first place. The singing ring irritates me to no end. And as much as I love the character Wolf, which I do SO MUCH, I hate the trope of a man having deep feelings for a woman then pestering her until she suddenly falls in love with him. That’s a storyline that I would like to see go away in a film. Although, I love Wolf’s journey from bad to good to … You know what, you can watch the series and find out for yourself.

Overall, The 10th Kingdom is a beautiful miniseries with perfectly cast and portrayed characters. If you haven’t watched it now is your moment.

However, if you don’t have ten hours to spare right now here is a list of my favorite moments as well as a few words of wisdom the story shared.

#2  The three trolls stuck in an elevator, thinking they’ve been shrunk and put in a matchbox.  “You’re falling to pieces! Get a grip on yourself! How can we be in a match box? Where are all the matches?”

#3 The evil Queen teaching “Prince Wendell” how to be a human. “No, we don’t play ball at the table.”

#4 Virginia’s sheep song in the shepherdess competition. “We will, we will shear you!”

#5 Prince losing his mind. “Anthony, I know this is highly irregular but could I trouble you for a cuddle, please?”

“You don’t trust nobody…. You may not get hurt but, huff puff, you won’t get loved either.” -Wolf

“Magic is very nice but it is easy to become addicted.” – Wolf

What did you think of the 10th Kingdom? Sound off below…

Our romance-themed entertainment site is on a mission to help you find the best period dramas, romance movies, TV shows, and books. Other topics include Jane Austen, Classic Hollywood, TV Couples, Fairy Tales, Romantic Living, Romanticism, and more. We’re damsels not in distress fighting for the all-new optimistic Romantic Revolution. Join us and subscribe. For more information, see our About, Old-Fashioned Romance 101, Modern Romanticism 101, and Romantic Living 101.
Pin this article to read later! And make sure to follow us on Pinterest.
By Katrina Daroff on April 23rd, 2016