Halloween “approacheth” everyone. Are you ready to be terrified out of your mind? Are you all set for horror movie marathons – the sort which involves turning off all the lights and watching people being tortured, maimed, stalked, assaulted and attacked for an hour and a half to two hours? This is called fun – for some. I have never enjoyed the truly terrifying sort of movie which is acceptable for this time of year. Some of us need more fun than Freddie Kreuger, more adventure than vengeful demons, more thrills than the chilling chainsaw wielding maniacs.

The great thing is there are lots of movies for Halloween that appeal to those of us who would like to be able to sleep nightmare free, so I’ve compiled a list of movies you can watch with friends or family. Movies you need not fear watching on your own.

I used some pretty stringent (not really) criteria to make my picks. For instance, I’ve looked at suitability for the season. You’ll notice that the amount of scariness varies though most of these end positively. I’ve noticed that even if there are some chills in a movie, it can help when it doesn’t end with someone escaping from the cave of unspeakable horror and then suddenly waking up in chains in a mental asylum overrun by zombies.

Take note that a lot of my recommendations are usually considered family friendly, but before you show any of these to very young children or very sensitive people, do some more research and approach with care. As we all know what’s scary for some people can be very subjective. None of these are rated higher than PG-13 though. Expect some very mild spoilers too.

So now, hop to my list of 14 Not-So-Scary Movies for Halloween night in no particular order.  (A Word to the Wary: Observe how I made sure not to stop at 13, so this list is guaranteed to be free of possible curses or coincidental, suspicious unfortunate accidents. You’re welcome!)

What it is about: A sweet newly dead couple hire a kooky ghoul – better not to be mentioned just in case- to help them scare some obnoxious people out of their home.

Spookiness factor: This is a Tim Burton movie after all, so be prepared to see some weird and sometimes disturbing undead shenanigans, but the action tends to be more wacky and silly than scary.

What it is about: A nervous Victorian era bridegroom finds himself accidentally engaged to an undead bride. This causes a lot of complications with his living fiancée, their overbearing parents, and various other interested sinister parties.

Spookiness factor: This is definitely a ghost story but with a sweet and endearing ghost. It’s mostly the living who are the villains around here. The ghostly aspects are only occasionally chilling

Alternative suggestion: Young Sherlock Holmes. Supposedly Sherlock Holmes’ very first case. This is also set in Victorian times and has the suspenseful, sometimes macabre Sherlock feel to it with lots of fog and eerie happenings.

What it is about: You should know this one: a group of scientists trap ghosts with some unlikely unwieldy looking equipment and fight to save New York from a supernatural threat.

Spookiness factor: Be prepared for chilling moments but there’s more the thrill of adventure you might get from an Indiana Jones movie with demon dogs, an all-powerful evil being played by a fashion model and a smiling but sometimes really, really mad marshmallow man sent to effect our heroes’ demise.

Alternative suggestion: Some people don’t care for it, but I enjoy Ghostbusters 2 as much as the first one. 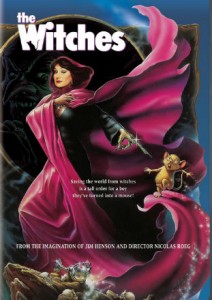 What it is about: An adaptation of Roald Dahl’s book about the witches of England plotting to get rid of all the icky children they hate. They’re led by the most fearsome witch of all in the form of the fantastic Angelica Houston. Only a little boy and his grandmother know enough about their plans to try to stop them.

Spookiness factor: I wouldn’t recommend this for very young children as they’ll be fleeing from any lady they meet who fits the bill of Roald Dahl’s typical witch. Don’t expect any lovable witches here; these are menacing and sometimes horrifying.

Alternative suggestion: Hocus Pocus: Never seen this but it was recommended when I asked online. Perhaps it has some much nicer witches. 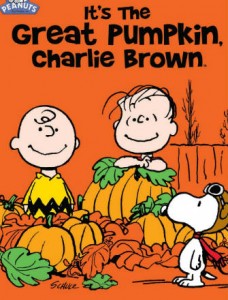 What it is about: Not movie length but this special is still worth a mention. The Peanuts gang enjoy tricks or treats fun while Linus tries to spread awareness about the Great Pumpkin.

Spookiness factor: Not a scare here. Just lots of Peanuts fun and the usual wise observations from little children, though that tantrum Sally throws when she gets disappointed must send chills through the spine of every Great Pumpkin believer. 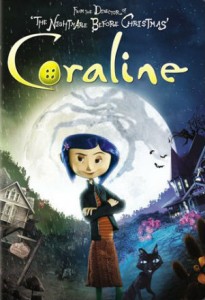 What it is about: A girl discovers another world through a door in her house but finds out it’s not quite what it seems which tends to happen with these strange mirror worlds, unfortunately.

Spookiness factor: Another one that probably shouldn’t be shown to the very young as losing your parents can disturb even adults. The Other Mother Coraline discovers in the alternate world is the stuff of nightmares, but this is still fun, and it’s great seeing Coraline stand up against evil.

Alternative Suggestion: Alice in Wonderland: another small town girl roaming in a mirror world. As if the typical story isn’t unsettling enough, Tim Burton’s version ramps it up by having Alice facing up to the dreaded Jabberwocky.

What it is about: If you like the sort of high jinks and pratfalls which were so well done in films of the 40s then you can’t miss one of the best Abbott and Costello movies as the famous comedy duo contends with not only Frankie himself but Dracula and the Wolf Man too! Movie buffs will enjoy that Lon Chaney and Bela Lugosi reprise the roles of the monster characters they played in dramas.

Spookiness factor: The monster characters play their parts straight, but there’s mostly laughs as Bud and Lou tear around trying to escape them.

Alternative Suggestion: Almost any other Abbott and Costello movie where they encounter horror movie staples like the Mummy.