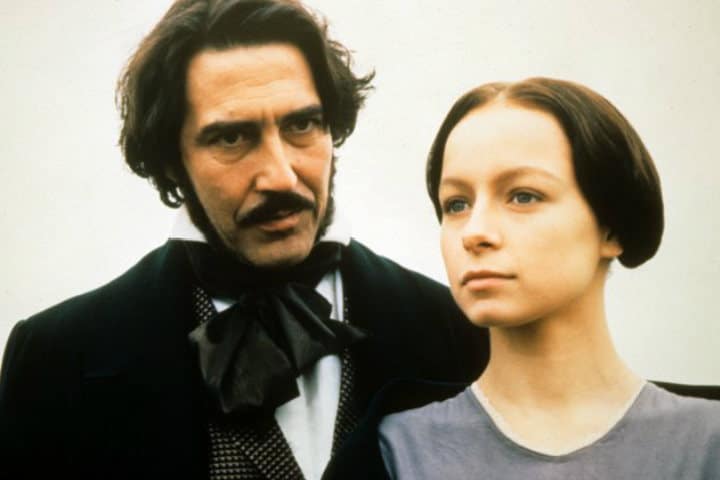 ITV and A&E’s 1997 made-for-TV film adaptation of Jane Eyre celebrates two decades of dividing viewers this year. The film stars the very fine Ciarán Hinds as Mr. Rochester and the young, pre-Oscar nominated Samantha Morton as our beloved Jane. Gemma Jones is a mesmerizing delight as Mrs. Fairfax and steals every scene she is in. A youthful, too-pretty-for-his-breeches Rupert Penry-Jones makes a brief appearance as St. John Rivers. 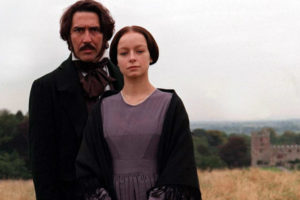 And in my head, I make this little connection of how two Captain Wentworths end up in the same film, which is never a bad thing: Ciarán Hinds played Captain Wentworth in Persuasion two years prior in 1995, and Rupert Penry-Jones played the role a decade later in 2007, after he’d gotten a decade-worth of wear on that pretty face of his. But I digress.

At just under two hours, there is much that has been cast off. To condense a masterpiece of the English language into 108 minutes is a redacting feat. Much is gone, just gone. And relationships that have many hundreds of pages to build up can end up feeling rushed and curt in the visual representation. So, it goes. There is much to miss, much to hate, much to irritate and, even, much to eventually appreciate and love about this fallible adaptation of Jane Eyre.

Vocal loathers of this Jane Eyre adaptation tend to focus on one thing: Ciarán Hinds’ Rochester. This is a brooding, brusque, bitter, bellicose brute of a man, who bellows and barks – that’s a lot of b’s. He commandeers, sports a bad ’stache, tromps around in baggy breeches and shares one of the most awkward first kisses ever captured on film. Gone are the gentle flirtations and playful teasings. He’s not mopey and withdrawn, he’s mad and blustering.

That’s the knee-jerk reaction and, admittedly, that was my own first reaction to this film. I did not like, no, I did not like it one bit. But then, I saw it again and then again, and now my feelings are quite the opposite, to paraphrase Lizzie Bennett. Ciarán Hinds’ Rochester has grown on me, very much so. There is much tenderness to be found there, much vulnerability.

There is a lovely scene, after the marriage proposal of the evening before, where Jane is elated, but unsure if she just dreamed it all up, if, in the cold light of day, Rochester will change his mind. She sees him and refers to him formally and properly as Mr. Rochester. He smiles and tells her to call him Edward, and then looks at her, so lovingly, so tenderly, and says, “Mrs. Rochester.” It’s a lovely moment, one of many in this film.

RELATED: Jane Eyre (1996): A Handsome, but Chilly Adaptation of a Brontë Classic

The baggy breeches are still there – and they do look comfortable, although not entirely flattering. The moustache is an acquired taste. The kiss is still awkward, gloriously so. I’ve come to really appreciate the open-mouthed ineptitude of Jane’s first kiss.

Hinds’ Rochester is at once mesmerizing and repulsive. There’s a raw magnetism there that is quite compelling. And while certainly an attractive man, Hinds is not a conventionally beautiful man, so he arguably fits more readily the book descriptions of Rochester than many of the hotties who have played Rochester on screen.

But What of Jane?

Samantha Morton is a porcelain-skinned beauty (and always the question – is she too beautiful to be plain Jane?) with piercing blue eyes, who portrays a very fine Jane, at times severe, demure, otherworldly, spunky. Morton is young in this adaptation, only nineteen or twenty when the film was made, so she is the “right” age for our youthful Jane. Her youthfulness shines through, giving her Jane a very believable freshness and innocence. She narrates the film – there are voiceovers throughout. I found this initially irritating, but it too has grown on me. And Morton has a lovely, lovely voice, very feminine and lilting. Her Jane is a tad too enigmatic, spunky and even self-righteously haughty at times, but I’ve come to forgive that as well.

And speaking of voices, there is a lovely singing scene in this adaptation with Blanche Ingram and Mr. Rochester, and if that is really Ciarán Hinds singing – which it very may well be, since he did sing in Phantom of the Opera (2004) – then the man has a lovely set of pipes on him.

All in all, Jane Eyre from 1997 is a solid adaptation that needs time to percolate. It needs multiple viewings. And it grows on you, so the initial loathing might just turn to tolerable and eventually to likeable and maybe even to loveable with time. Give it a chance or two or three.

Our romance-themed entertainment site is on a mission to help you find the best period dramas, romance movies, TV shows, and books. Other topics include Jane Austen, Classic Hollywood, TV Couples, Fairy Tales, Romantic Living, Romanticism, and more. We’re damsels not in distress fighting for the all-new optimistic Romantic Revolution. Join us and subscribe. For more information, see our About, Old-Fashioned Romance 101, Modern Romanticism 101, and Romantic Living 101.
Pin this article to read later! And make sure to follow us on Pinterest.
By Jessica Jørgensen on August 23rd, 2017