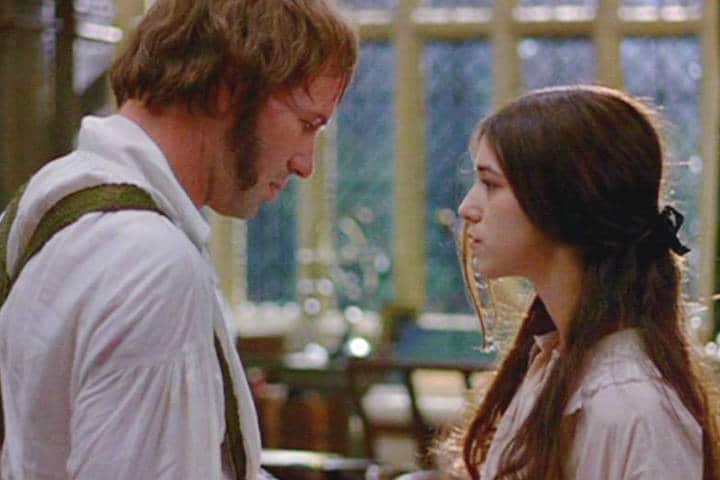 Like so many classic pieces of literature, there are numerous adaptations to devour and delight. Some, Pride and Prejudice in particular, have a veritable smorgasbord of interpretations to wade through. Others, like Northanger Abbey, North and South or Our Mutual Friend, have less to entertain. Jane Eyre belongs in the former category. There are numerous film adaptations and mini-series which tell the story of Jane Eyre, the titular heroine in Brontë’s gothic romance.

Truth be told, this story never gets old. Everything about it is designed to enthrall, holding the reader and the viewer spellbound as Jane’s unfortunate childhood starts her on a path destined to discover her soulmate and her life.

Jane Eyre is orphaned, unloved and unwanted. As a child, she is systematically bullied, emotionally abused and shaped into a practical, introverted, aesthetically severe young woman. Despite the abuse, her spirit never breaks. She bravely endures years of cruelty at the hands of teachers. As an adult, Jane accepts a position as a governess to the brooding and sardonic Mr. Rochester’s ward. At Thornfield, Jane feels safe, happy and secure for the first time in her adult life.

I am not deceitful! And I am not a liar. For if I were, I should say that I loved you. I do not love you. I dislike you more than anyone in the world!

Franco Zeffirelli’s take on Jane Eyre is my favourite film adaptation. Perhaps it resonates because it’s because it was the first I saw as a child. While Toby Stevens and Ruth Wilson come a close second in the 2006 BBC miniseries, I have so much love for Charlotte Gainsbourg and William Hurt as this version’s kindred spirits.

The Shadows Are As Important As The Light 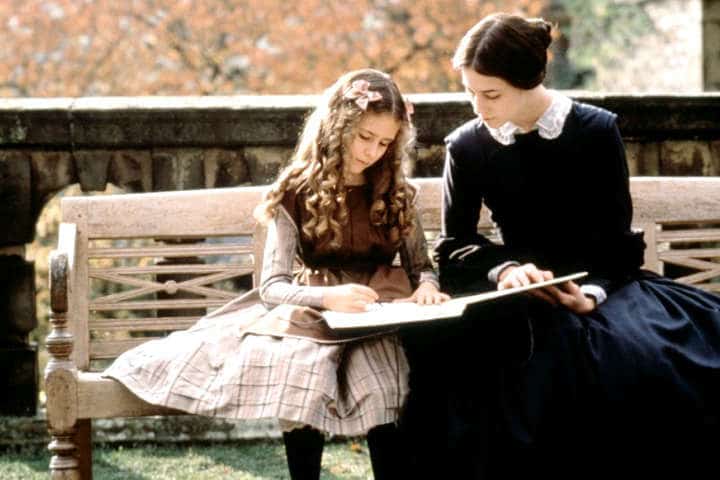 Zeffirelli’s Jane is plain, almost austere in her dress and person. She barely smiles, any joy she experiences glimpsed only by the elusive lift of her lips. Mr. Rochester as a foil is everything she is not – handsome and enigmatic. Unbeknownst to Jane, her own practical, straightforward demeanor makes her a complex puzzle Rochester is determined to solve. At Thornfield, Jane is a whole person, a beloved governess and a respected member of the Rochester household.

The film is moody and bleak, and in my opinion, the correct atmosphere to highlight the gothic undertones, as well as the repressed, implied sexuality of the source material. Everything at Thornfield is gloomy and damp. Yet Jane’s bedroom is sunshine and beams of light, expertly contrasted with the darkened spaces that Rochester occupies. These details brilliantly and beautifully underscore the drama unfolding on screen.

Do You Think Me Handsome?

The heart of Jane Eyre is the pivotal attachment she forms with Mr. Rochester. Jane is attracted to him. However, she is unsure of what his intentions and feelings are. Rochester, aware of her feelings, tests his theory by inviting the beautiful Blanche Ingram (Elle Macpherson) to Thornfield in an elaborate ruse. Each night he surreptitiously watches Jane’s reactions to his supposed attachment to try and garner insights into her suppressed emotions.

Charlotte Gainsbourg is intense and focused as the leading lady. She imbues her character with an uncanny intelligence, a critical eye and the ability to simply, but clearly convey Jane’s hidden, yet passionate spirit. With ashen cheeks, a severely knotted bun and an almost perpetual smile-less visage, Jane is bleak. And yet the camera seems to adore her. Wearing very little makeup, Jane is still eerily beautiful and plain in equal measures.

Do you think, because I am poor, obscure, plain and little, I am soulless and heartless?

Mr. Rochester (William Hurt) is subdued, introverted and cynical. World weary and somewhat embittered, Rochester is a fascinating character study. Around Jane, he seems unable to hide the sparkle in his eye, however. William and Charlotte have a fragile, yet electric chemistry that is incredibly compelling. With this pairing, the difference in age is also quite apparent. Jane’s severity in style and dress only seems to underscore the fact that she is a young woman and Rochester is a mature man. 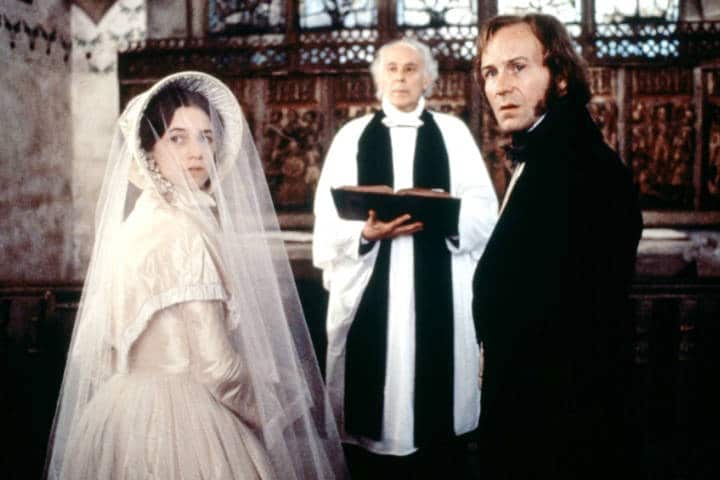 The most compelling parts of this adaptation, however, is the first quarter of the film. Oscar winner, Anna Paquin is incredible as a young Jane. Fierce and independent, she is unbroken at the hands of family and teachers who care nothing for her well-being. Paquin quite frankly steals every scene she is in and it’s easy to recognise her undeniable talent.

But Jane Eyre also has gothic elements. There are ambiguous characters, strange goings on at Thornfield hall and intrigue around every corner. While the film does not have the luxury of meandering through these various plot points, it does a decent job of giving just enough without making the viewer feel cheated. Jane’s time with the St. John family, however, is almost non-existent. This version will disappoint if you particularly enjoyed that storyline.

Rochester never quite morphs into the perfect gentleman and Jane, while bleak and ethereally beautiful, is never treated to a gratuitous glamour shot. Jane Eyre is a beautiful film that remains true to characters at its heart.

Our romance-themed entertainment site is on a mission to help you find the best period dramas, romance movies, TV shows, and books. Other topics include Jane Austen, Classic Hollywood, TV Couples, Fairy Tales, Romantic Living, Romanticism, and more. We’re damsels not in distress fighting for the all-new optimistic Romantic Revolution. Join us and subscribe. For more information, see our About, Old-Fashioned Romance 101, Modern Romanticism 101, and Romantic Living 101.
Pin this article to read later! And make sure to follow us on Pinterest.
By Naazneen Samsodien on August 17th, 2017

6 thoughts on “Jane Eyre (1996): A Handsome, but Chilly Adaptation of a Brontë Classic”