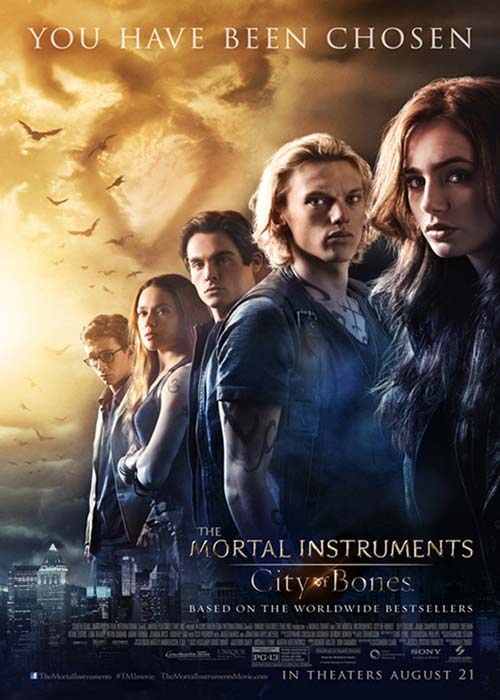 Based on the novel by Cassandra Clare

From Shadowhunters, demons, vampires, werewolves, to warlocks, The Mortal Instruments has it all for the folks who love, or can at the least appreciate, the world of the supernatural. With fun action, amazing casting choices (from Jared Harris, Lena Headey to Jonathan Rhys Meyers), and an engaging romantic story to pull at the heartstrings, there is absolutely nothing dull about this adaptation of the bestselling YA urban fantasy series.

RELATED Romantic Moment of the Week: Luke and Jocelyn

And yes, this is urban fantasy with some paranormal romance on the side. If you go in expecting something more ‘adult,’ something more realistic and academically literary for the big screen, well you will very likely walk away disappointed.  No doubt you are probably not the target audience anyway.

What the Critics Say

Unsurprisingly, reading the reviews on Rotten Tomatoes, they were primarily negative and commonly (and unoriginally I might add) compared this to Twilight as if somehow EVERY genre teen story equates to Twilight.  One of my favorites called the film a “desperate Twilight wannabe” (The Hollywood Reporter), while The New York Times stated that “References to “Star Wars” and the Harry Potter and Twilight universes pose less of a problem than the increasingly messy action scenes and an overabundance of main characters, more than enough to fuel several franchises.” An overabundance of main characters seems exaggerated, the critics fueled by a passion to hate this film simply because 1) they fail to understand the genre and 2) they have joined the sheep who believe every teen paranormal romance story likens to Twilight.

Another of my ‘favorite’ critiques from Sky Movies described the film “as shambolic drivel, a lazy, unfocused, over-complicated attempt to ape Potter while drearily providing a Twilight-style love triangle.” Despite the overly pretentious nonsense spouted here, a love triangle is not something new. Even L.J. Smith teen paranormal romance books written in the ’90s included love triangles (i.e. The Vampire Diaries and The Secret Circle). Not to mention, love triangles have been around since the beginning of storytelling (Arthur, Lancelot, and Guinevere come to mind). Stephenie Meyer was not the first in her genre to include a triangle nor will she be the last. So taking ‘only’ The Mortal Instruments adaptation of Cassandra Clare’s engaging fantasy series into account (which by the way is not actually like Twilight), I found the film succeeded in what it aimed to do: entertain.

The Mortal Instruments does fall into a similar category, however, as Twilight, nothing more. To me, it’s like saying every time you see a spy gadget in a movie someone has copied James Bond. Like Film Noir, urban fantasy or even paranormal romance, have elements that will likely be found in most stories of the genre, so if you see a snarky, disillusioned detective – oh sorry wrong genre, a love interest with extraordinary powers don’t fret. It’s not copying Twilight it’s just staying true to the genre with its own unique twist.

The story follows Clary, a young artistic and seemingly normal teen who stumbles into a secret world when she witnesses a murder in a club that only she can see. To the rest of the world, including her sweet best friend Simon who has unrequited feelings for Clary, these killers (or shadowhunters as it would turn out) happen to be invisible if they choose to be. There is also something mysterious about Clary herself. Her mother (Lena Headey) and mother’s best friend Luke (scene-stealer Aidan Turner) clearly have something to hide. And as Clary starts drawing a strange symbol, time becomes of the essence.

Soon, like many teen protagonists in urban fantasy, Clary learns of the extraordinary when she meets the handsome Jace, a shadowhunter (demon hunter descended from angels), and of the top-secret world in which she comes from when her mother goes missing. She must then, of course, leave the ordinary behind forever and no longer remain a mundane (regular human).

What works about Clary as a character with a destiny is that she is flawed. She makes mistakes by acting like a stubborn teenager but she also shows bravery in moments that would send most packing. She will do anything to find and save her mother (even if sometimes her naivety is completely frustrating in a few scenes).

RELATED Moonlight (2007) 10th Anniversary Review – The Most Romantic Vampire Series of All Time?

As the story continues to unfold, the audience learns of Valentine who is after Clary because her mother Jocelyn revealed to Clary (though the memories have been repressed with a spell) where the mortal cup, a powerful object that will help him create an army of shadowhunters, is hidden. The film builds suspense as we question who to trust in this veiled world; anyone could be trying to get the cup after all.

Was there an overabundance of characters as several critics complained? The answer is most certainly not. In fact, I found the characters quite simple to follow because of the self-contained plot taking place in the empty mansion with only six main characters in total. The rest were supporting and appeared as needed to further the plot.

Overall, there is the protagonist Clary, her best friend Simon, Jace, his small team of two shadowhunters, a warlock, a witch, Valentine (our villain), the older shadowhunter played by the fabulous Jared Harris, and Jocelyn and Luke. Of course, there are also Valentine’s two goons (if one could consider them ‘actual’ characters). With fewer characters than other genre based stories such as Pirates of the Caribbean and the Harry Potter franchise, I fail to see where all the complaints stem from.

And to top it all off, most of the side characters captured my interest. Jonathan Rhys Meyers’ interpretation of the villainous Valentine was fantastic while Sarah Connor (I mean Jocelyn) pulled off the mother so well that I want more of her backstory. I want a sequel for her backstory particularly. But it was Aidan Turner as Luke that drew me in the most. He pulled off his part with charisma and humor that didn’t even seem to be part of the screenplay. If only he had been in more scenes…

The main players also played their parts believably. Lily Collins (Clary) had a wonderful innocence about her, Robert Sheehan (Simon) a sweet adorableness and likability, and Jamie Campbell Bower (Jace) an aura of intensity that makes for a strong, romantic lead. None of the actors came off as amateurish or with a tone of voice that told me they were actors on screen rather than characters I could believe in. The dialogue in all its campy glory also rang true and didn’t make me cringe.

The romance itself was compelling and goes to a dark place I think the audience will not expect if they are new to the story (I won’t spoil it for you). The chemistry between the three leads felt palpable and convincing. Everything about the casting and the writing of the romantic elements within this fantasy world came together seamlessly for a good whole.

I have to confess that while I am sure Clary and Jace have the most popular love story, I felt drawn to Jocelyn and Luke and the unrequited feelings between their characters. Can they have something more? I hope so and anxiously await the five possible movie sequels and will also be reading the books (I did read the first years back and loved it then but need a refresher) to flesh out their story even further. Perhaps I am just biased towards Luke because of my Mitchell and Being Human love. No, but seriously. He plays the perfect werewolf.

Was this movie without flaws? No. Some of the background details need more fleshing out and are likely confusing to those who haven’t read the book. I didn’t understand Hodge (Jared Harris) as well as I could have for instance. There were also a few moments of cheese but still, the moments were rare. Overall, this is a film that has something for almost everyone (gritty realism fans or those not interested in urban fantasy should probably stay away) from the romance to the fun adventure and action. Hopefully, enough people will overlook the negative reviews and decide for themselves. Go see this movie and trust me, you’ll be entertained.

You can now buy The Mortal Instruments: City of Bones on DVD/Blu Ray.

Did you read the books? Have your own thoughts on the film? Sound off below...

You can read more about Mortal Instruments cast member Aidan Turner in our article about him as a rising star here.

Our romance-themed entertainment site is on a mission to help you find the best period dramas, romance movies, TV shows, and books. Other topics include Jane Austen, Classic Hollywood, TV Couples, Fairy Tales, Romantic Living, Romanticism, and more. We’re damsels not in distress fighting for the all-new optimistic Romantic Revolution. Join us and subscribe. For more information, see our About, Old-Fashioned Romance 101, Modern Romanticism 101, and Romantic Living 101.
Pin this article to read later! And make sure to follow us on Pinterest.
By Autumn Topping on August 23rd, 2013

1 thought on “The Mortal Instruments: City of Bones – An Exciting New Adaptation”