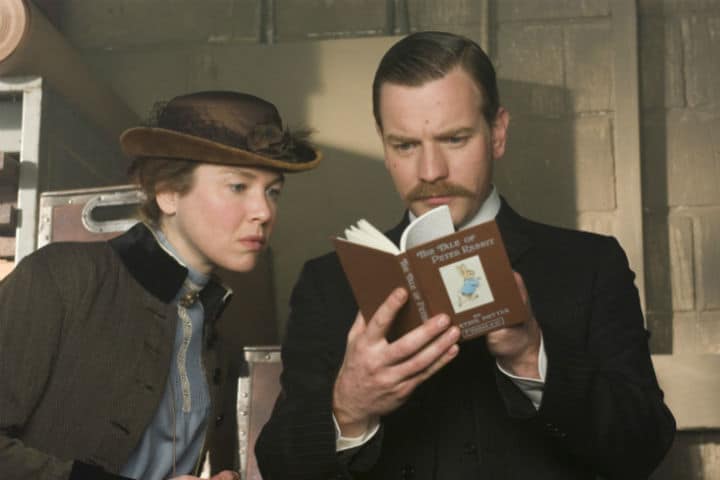 Miss Potter is a historical drama based on the life of Beatrix Potter, author of such beloved fictional characters as Peter Rabbit, Jemima Puddle Duck and Mrs. Tiggy-Winkle. It is a delightful film about an eccentric and interesting woman.

Beatrix Potter does not behave in the way that an unmarried woman of thirty-two should; at least in the eyes of society. She refuses to conform, much to the chagrin of her parents.  Instead of accepting one of the many suitors they have put before her over the years, she insists upon traipsing between publishers attempting to get her children’s stories printed. Finally, she meets with a publisher who agrees to take on her manuscript. She soon realises she has been accepted in order to keep the Warnes’ youngest sibling busy. Aware that they are expected to fail, Norman Warne and Beatrix Potter set out to prove everyone wrong,

Miss Potter is a delightful film full of warmth and imagination where the lines of reality blur just a little. It was fascinating to learn more about the author of the books I loved as a child. It was also refreshing to see a narrative about a woman who refused to do as society told her and became a tremendous success because of it. There’s also a subtle message about conservation in the latter half of the film that Beatrix Potter herself would likely approve of.

Miss Potter has a gentle, playful sense of humour which I actually rather like. There is a comfortable, warm tone to the film that lures you in almost immediately. There is also a touch of magical realism as we see Miss Potter’s drawn creations reacting to the real people around them; though only she can see them.

Renee Zellweger is absolutely charming as the titular Miss Potter giving a quiet, energetic and even heartbreaking performance. Ewan McGregor is lovely as the slightly bumbling yet passionate Norman Warne. However, I especially liked Emily Watson’s performance as Millie Warne, an outspoken and unusual woman. There are also several well-known British actors playing supporting roles who are excellent.

RELATED POST – Down With Love, Maybe, But Not With Ewan McGregor’s Hotness

Renée Zellweger and Ewan McGregor reunite for the first time since Down With Love; this time performing a very different love story. The sweet understanding between Miss Potter and Mr. Warne is a joy to watch. As this is based on real events there is no avoiding the way the story ended but it is handled very well. There is also another love story towards the end which is quite a pleasant surprise but I won’t spoil it.

If you enjoyed Finding Neverland and Becoming Jane then you will love this film too.

All in all, a lovely film that any historical drama fans should experience, especially if you like peeking into the minds of literary greats. If you enjoyed Finding Neverland and Becoming Jane then you will love this film too.

Our romance-themed entertainment site is on a mission to help you find the best period dramas, romance movies, TV shows, and books. Other topics include Jane Austen, Classic Hollywood, TV Couples, Fairy Tales, Romantic Living, Romanticism, and more. We’re damsels not in distress fighting for the all-new optimistic Romantic Revolution. Join us and subscribe. For more information, see our About, Old-Fashioned Romance 101, Modern Romanticism 101, and Romantic Living 101.
Pin this article to read later! And make sure to follow us on Pinterest.
By Elinor Cackett on July 20th, 2017