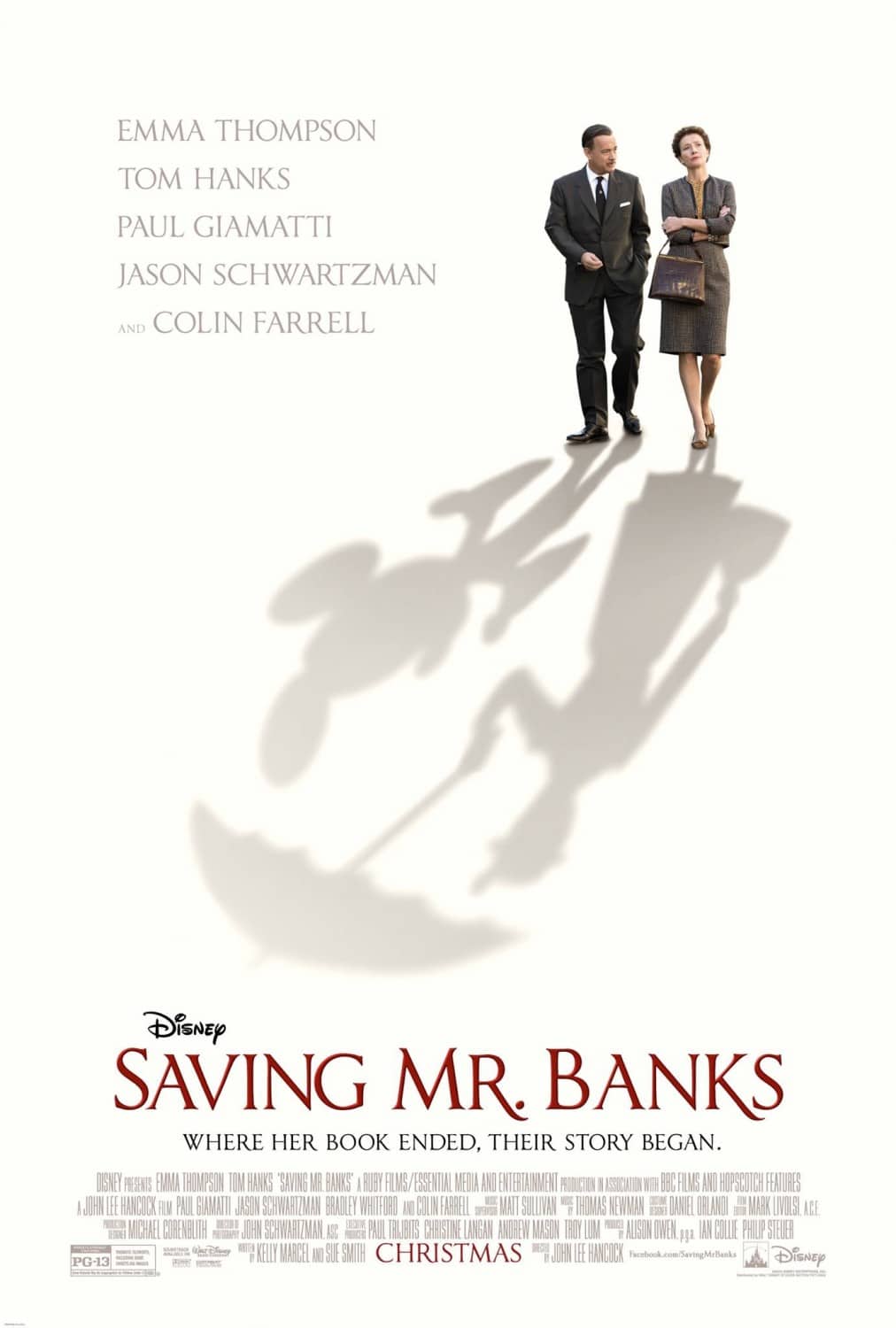 Saving Mr. Banks isn’t about how wonderful P.L. Travers was (the author of Mary Poppins) and the adorable story of how she and Disney came together to make one of best family films of all time.  In fact, Travers was the complete opposite; she is no prettified Julie Andrews like, a sweet older woman who adores children. She is rude, mean, prickly around the edges, hates everything Disney (including the man), and was only tempted (after 20 years of begging by Walt Disney) to sign her rights over because she was out of money. Reluctantly, Travers agrees to visit the happiest place on earth (though she wouldn’t agree on this assessment) and work as a consultant to the movie, while the screenwriter and songwriters (the Sherman brothers) convince her to sign over the rights.

What follows are tempestuous arguments between this writing team and the woman behind the creation of Mary Poppins. She hates animation, while they want animated penguins (though I admit I too despise the penguin sequence); they want Mrs. Banks to be a suffragette (not in the book), while she just wants her to be a mother; she wants Mr. Banks clean shaven, while they and Disney want a moustache, etc. They clash on just about every idea, Travers fearful they completely misunderstand the deeper themes behind the books and characters. Did Mary Poppins arrive to save the children or was it something else entirely?

What works so wonderfully about Saving Mr. Banks are the seamless transitions between the past (the film often goes back to Travers as a child in Australia) and the present (1961) as they work on putting the script together (with the worry of trying to appease Mrs. Travers). The themes intermingle beautifully as the audience comes to understand why P.L. Travers became this harsh woman. In fact, P.L. Travers isn’t even her real name. Travers grew up in Australia with an alcoholic father who works at a bank. Watching his deterioration is painful but emotionally entrancing to see onscreen. The performance by Colin Farrell is spot on as I somehow could empathize with this man ruining his family. From Travers’ eyes, we could understand her deep love for a mostly sweet father that was good beneath this disease and empathize with a dreamer who just couldn’t live in the real world.

More than just Colin Farrell, however, but every performance was outstanding with characterization to back up the entire main (and even some side) players. Emma Thompson and Tom Hanks are the dream team with back and forth sparring that is funny and at times even touching as we delve deeply into both of their pasts. Both actors are worthy of Oscar nominations, whether or not they will be nominated remains to be seen. The young Travers and her mother played by the amazing Ruth Wilson (Jane Eyre and Luther) are also fantastic. Ruth Wilson is so perfect in this role that I don’t think any other actress could have pulled it off as flawlessly. The choices she makes to look first emotionally stressed and then later dead in the eyes are just astonishing to witness on the big screen. While unlikely to happen (as Ruth Wilson isn’t exactly part of the in club in Hollywood just yet), her performance should also be recognized as a supporting part. While the writing team doesn’t get as much characterization, they all have great comedic chemistry with Thompson that works well to lighten some of the deeper scenes from the past.

Comparable to Finding Neverland in style (and indeed the original Mary Poppins was influenced by Peter Pan), Saving Mr. Banks is definitely one of the best films of the year that everyone should go see while in theaters. The story, the characters, the acting, the directing, the script (the dialogue can even be poetic), the cinematography, etc. all come together to make a beautiful film based on a fascinating true story. Is it completely accurate? No. But that doesn’t matter. This is a story about hope, redemption, and love, even if P.L. Travers never does undergo a true transformation from prickly older woman to that of one who ends up loving everything Disney (and thank goodness for that). Instead, this is a story about the magic of the imagination and what we can do with it when real life fails.

Read the recent reviews of the films The Book Thief and About Time.

Our romance-themed entertainment site is on a mission to help you find the best period dramas, romance movies, TV shows, and books. Other topics include Jane Austen, Classic Hollywood, TV Couples, Fairy Tales, Romantic Living, Romanticism, and more. We’re damsels not in distress fighting for the all-new optimistic Romantic Revolution. Join us and subscribe. For more information, see our About, Old-Fashioned Romance 101, Modern Romanticism 101, and Romantic Living 101.
Pin this article to read later! And make sure to follow us on Pinterest.
By Autumn Topping on December 20th, 2013