An Elizabeth Gaskell For All Seasons

I am obsessed with Elizabeth Gaskell’s stories. I haven’t read as many as I want to yet, but I love the way she writes, the characters she creates, and the romances she weaves. The other thing I love about Elizabeth Gaskell is the way her novels have been adapted brilliantly to television. I have never seen a Gaskell adaptation I didn’t like; they all make me think and cry, which I love.

The other day, I realized there are some books and movies that fit better during different seasons of the year. I read Ray Bradbury in the fall, Anne of Green Gables in the spring, and a lot of Jane Austen in the winter. Then I thought about Elizabeth Gaskell and realized there is a story for every mood, and, of course, a Gaskell for every season, if you will. With that, here are four Gaskell tales and which season I prefer to read/ watch them.

My favorite Gaskell work is North and South. I love it more than Pride and Prejudice. The characters, the stories, the message… I just love it. The 2004 mini-series starring Richard Armitage and Daniela Denby-Ashe is fantastic. When it’s cold and gray, this is the book and film I reach for. Plus, the scenes in the mini-series that stand out the most take place during the winter.

I also chose this for winter because of the scene in the mini-series when Thornton walks through the mill and the cotton flies all around him. It just gives me a lovely wintery-vibe.

My favorite spring-time Gaskell is Wives and Daughters. I think this is mainly because of the TV version with that wonderful romantic scene in the rain. However, I also love this as a spring story because of the themes of rebirth and second chances. Molly and Roger are also serious about studying and learning about the natural world. It has serious moments, but I think this is certainly a wonderful spring-time story.

When it comes to summer, there’s one Gaskell story that stands above the rest. That is Cranford. To my shame, I have not seen the miniseries with Dame Judi Dench, but the story is one I can imagine reading in a hammock, if only because it’s a little smaller. If I dropped Cranford on my face, it wouldn’t hurt too badly. Cranford’s also a fun, witty story, and just the type of book I like to read during a hot summer day. 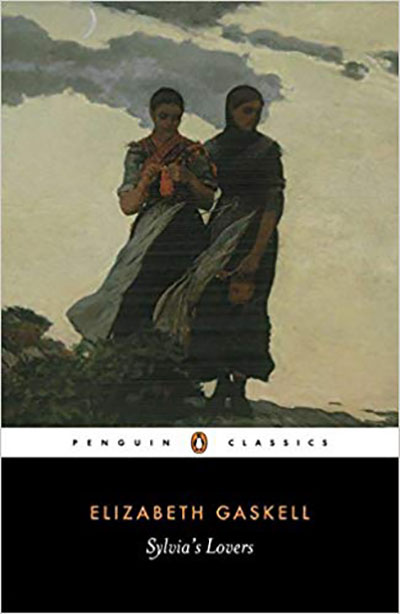 This one was hard for me because during the fall I tend to reach for stories that are a bit darker and sadder. But then I discovered the Gaskell tale Sylvia’s Lovers, and while I haven’t read it yet, this story is perfect for my fall reading needs (although Mary Barton would do in a pinch). Gaskell herself thought this book was tragic, and it sounds like the type of book that requires cocoa or tea and a warm blanket. For me, that makes it perfect for fall.

What are your favorite Elizabeth Gaskell stories and/or miniseries? Do you read certain books during certain seasons, or is it just me? Let me know in the comments section!

Our romance-themed entertainment site is on a mission to help you find the best period dramas, romance movies, TV shows, and books. Other topics include Jane Austen, Classic Hollywood, TV Couples, Fairy Tales, Romantic Living, Romanticism, and more. We’re damsels not in distress fighting for the all-new optimistic Romantic Revolution. Join us and subscribe. For more information, see our About, Old-Fashioned Romance 101, Modern Romanticism 101, and Romantic Living 101.
Pin this article to read later! And make sure to follow us on Pinterest.
By Bailey Cavender on March 26th, 2019

4 thoughts on “An Elizabeth Gaskell For All Seasons”