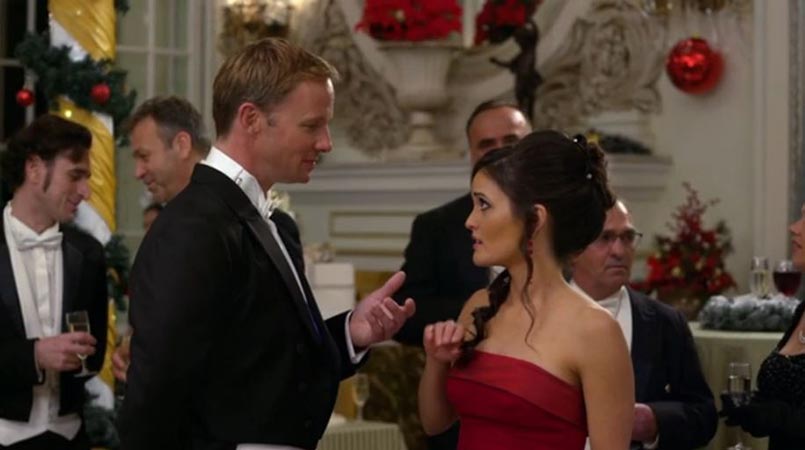 If the state of my Microsoft Word “recent file” tab is anything to go by, it’s clear I watch and subsequently review a lot of TV Christmas movies this time of year. (Maybe even too many.) So far this year, my tradition continues with Crown for Christmas. As is the case with any of the new original films Hallmark airs, I have again fallen prey to my weakness that is Christmas movies. Last night’s Hallmark premiere, Crown for Christmas, is more than a little bit cute, primarily because a familiar British face shows up in the role of leading man – and he’s a king, no less!

Life for the Evans family has never been easy. But this Christmas, life for them is going to get a little tougher. The eldest sister, Allie (Danica McKeller) loses her job as a maid following a quibble with her boss.

Fortunately for Allie, someone in need of a temporary employee overhears her dismissal. This prompts a job offer as a governess working for royalty. King Maximillian (Persuasion‘s Rupert Penry-Jones) is in need of yet another nanny to corral his somewhat difficult daughter, Theodora. Allie seems the ideal choice, at least to get Max through the holiday season. But the more Allie gets to know him and Theodora, the more comfortable she becomes in this life with a red-headed princess and her widowed father. 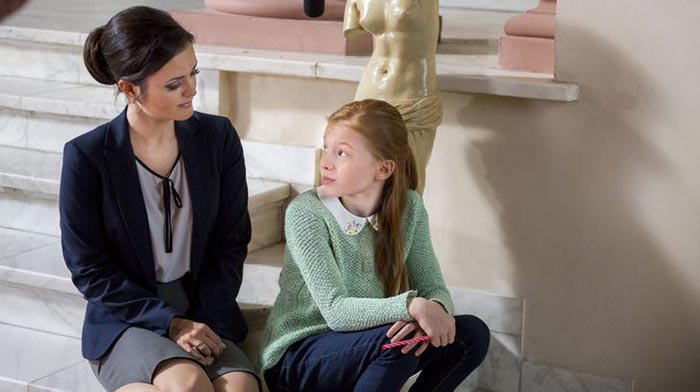 As adorable as Crown for Christmas was, however, I do have to address a fault (or at least something that bothers me): the script’s short timeline. Ordinarily I wouldn’t be so nitpicky, but for some reason, the fact that this entire story takes place over a matter of days felt uncomfortable. I personally feel this adorable, contemporary fairy tale film could have been strengthened if there had been a longer space of time between Allie’s arrival and the eventual conclusion. True, this is a fairy tale and as such starts out reaching for the stars as is, however, selling the angst and character emotions would have been more believable had the timeline been altered just a little.

With that out of the way, this new film is as smashing as any of its Hallmark peers. The Cinderella fairy tale storyline is something I never tire of whether it’s set in the contemporary or historical world. For the most part, the cast of Crown for Christmas is fantastic, and in particular, the young actress who plays the princess was delightful. This says nothing of the addition of British star Rupert Penry-Jones as the leading man. Seeing him in this will be great fun for those of you fellow period drama aficionados who will recognize Rupert as Wentworth from Persuasion and also the adaptation of The 39 Steps.

Even these many years later, one of my most favored TV Christmas movies (or one of them, for there are many) is A Princess for Christmas (starring Outlander’s Sam Heughan and Merlin’s Katie McGrath). This one doesn’t quite take its place but as with anything you sit down to watch this time of year, this is full of twinkle lights and fabulous holiday cheer. One thing I am sure of, no matter where this one falls in your personal rankings of Hallmark’s originals, this is sure to leave you with a smile.

Catch Crown for Christmas on the Hallmark Channel (it’s re-airing throughout the week) and find it exclusively on DVD at Walmart.com or Walmart stores.

Will you be checking out Crown for Christmas? Sound off below…

Our romance-themed entertainment site is on a mission to help you find the best period dramas, romance movies, TV shows, and books. Other topics include Jane Austen, Classic Hollywood, TV Couples, Fairy Tales, Romantic Living, Romanticism, and more. We’re damsels not in distress fighting for the all-new optimistic Romantic Revolution. Join us and subscribe. For more information, see our About, Old-Fashioned Romance 101, Modern Romanticism 101, and Romantic Living 101.
Pin this article to read later! And make sure to follow us on Pinterest.
By Rissi JC on November 28th, 2015