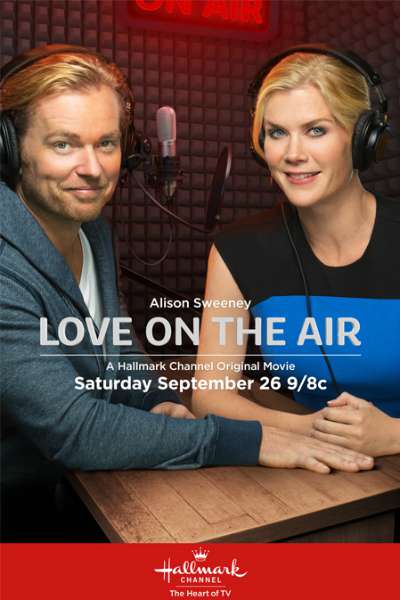 If there is one thing to be said for Hallmark Channel originals, it’d be to praise their consistency. Whether it’s their much anticipated Christmas line up or perhaps it’s “wedding season” (April-June), they make a party out of anything with their variety of romantic-comedy films. Last night, their latest premiered and was actually one of the cutest in their line up that I’ve seen in a while.

Love on the Air is about the straight-laced (in her business world at least), career driven Sonia (Allison Sweeny). Engaged to a sports agent, Sonia proudly uses her radio show as a sounding board to proclaim her feminist messages that include encouraging women’s independence (who needs a guy to open the door for you?), much to the chagrin of her fiancé.

Following a bad night out (during which she leaves early from an event he requested she attend), he accuses her of not being supportive enough. Then, following a radio host’s message to leave an unfulfilled relationship, Scott breaks the engagement with Sonia. On air. That host happens to be Nick (Jonathan Scarfe), whose primary message seems to be attacking relationships. Opposite of Sonia in every way (including his views on relationships), their on-air bickering leads to a permanent gig complete with a radio show where a love-hate relationship blossoms between the two. 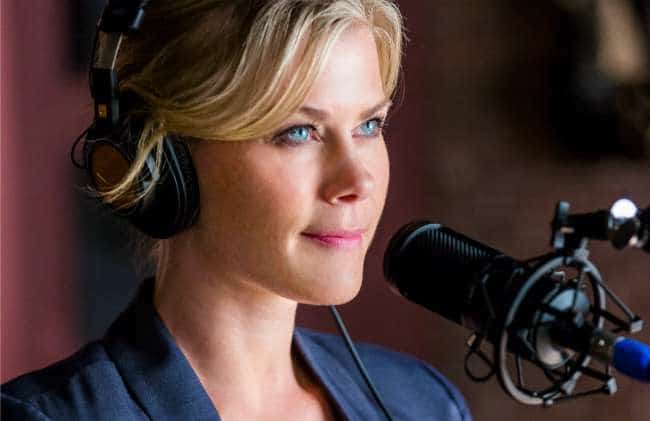 With its “battle of the sexes” set up, I thought this TV movie was really quite cute. Love On The Air is not revolutionary, but the concept and the acting make it “pop” with some sweet chemistry. Those familiar with films like Intolerable Cruelty or Laws of Attraction will appreciate this one and if you liked either one of those, that’s a pretty good idea of what this film is like. It has that fun kind of competition between the leads going for it. Naturally true love prevails and brings the script full circle (a script that is really surprisingly good with its string of witty banter).

I really enjoyed Allison and Jonathan together. Because of their repertoire, this is one of those movies that we actually root for those “love-hate” exchanges between them; it’s the reason the story has the curiosity it does although we know a happy ever after is nearly guaranteed. In spite of all of that tension-fueled chemistry, there is a kind of classic movie quality to the story that helps keep things simple and charming. The plotting is different than that of classic movies, but between Nick’s and Sonia’s discovery they are neighbors and their movie nights (including Sonia’s obsession with the Hepburn movies), their relationship has that nostalgic optimism. The rise and fall of friendship and a bickering on-air persona makes it all the more complex. I loved the setting (because, the home state isn’t often the setting of films) and thought Sonia’s transformation was written well, especially how she viewed a relationship, not to mention, learning the art of compromise. 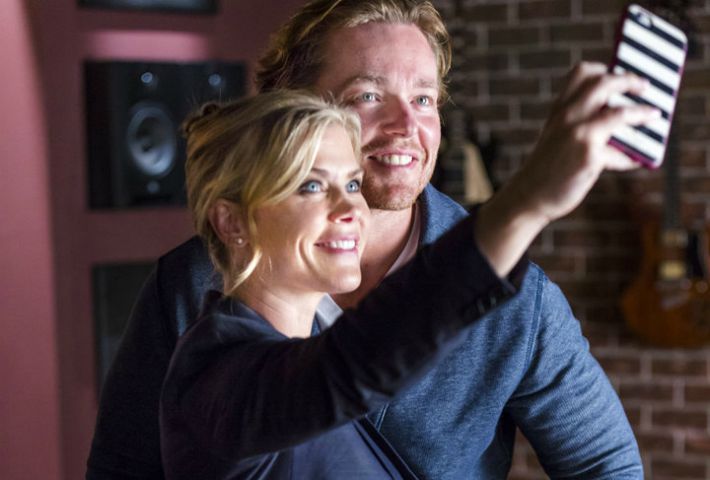 If there is one idea I felt was upside down, it’d be Scott’s reasons for breaking up with Sonia. He pursued his career with the same ambition as Sonia did hers; his accusations fell short of being accurate. Looking at his own priorities would have revealed exactly the same as the reasons he cited for the breakup. But then, that’s minor in the overview. Anyone who enjoys Hallmark’s originals is certain to be entertained by their latest. I know I was, and definitely recommend this one for fans of wholesome romantic-comedies.

Did you watch Love On the Air? What is your most recent Hallmark favorite? Comment down below with any thoughts…

Romance Rating (Because it’s so cute!)

Read our list of 15 Favorite Hallmark Channel Romances and visit our review archives to see what else we’re watching.

Our romance-themed entertainment site is on a mission to help you find the best period dramas, romance movies, TV shows, and books. Other topics include Jane Austen, Classic Hollywood, TV Couples, Fairy Tales, Romantic Living, Romanticism, and more. We’re damsels not in distress fighting for the all-new optimistic Romantic Revolution. Join us and subscribe. For more information, see our About, Old-Fashioned Romance 101, Modern Romanticism 101, and Romantic Living 101.
Pin this article to read later! And make sure to follow us on Pinterest.
By Rissi JC on September 27th, 2015