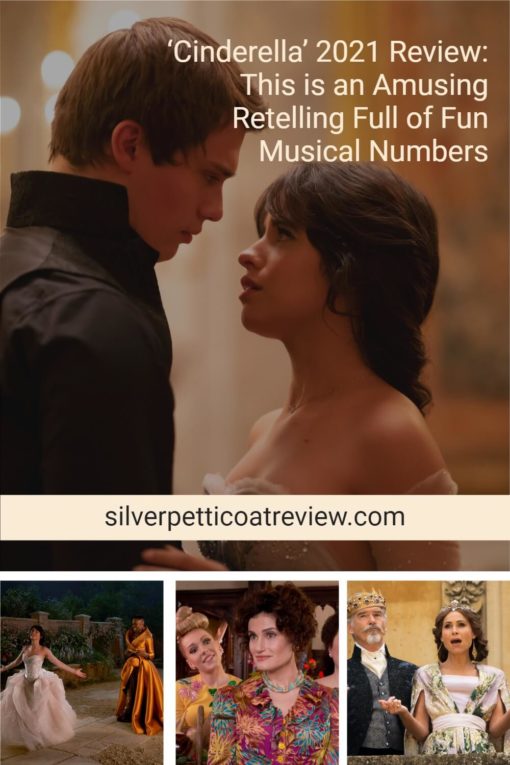 The new Cinderella is a jukebox musical, bringing something fresh to the hundreds of versions told before. It’s a mostly pleasant revision, although Cinderella is an imperfect and polarizing film sure to garner mixed reactions from the audience.

Cinderella – 2021 musical style – follows the story closely, showing influence from previous versions. She has the spunk and independence of Danielle in Ever After, the determination of Ella in Ella Enchanted, and there are even talking mice like the Disney cartoon.

Where this retelling diverges, however, is with the focus on female empowerment and career ambition.

Cinderella (Camila Cabello) longs to be a fashion designer and business owner more than she wants to marry a prince and become queen. That is the more significant conflict of the movie than Cinderella trying to escape her stepmother.

RELATED: Ranking The 16 Best Adaptations Of The Beauty And The Beast Story

Here, she wants to have a career and reach for her dreams, putting a spin on the Cinderella/Prince relationship. Can they find a way to be together since he’s supposed to be king, but she doesn’t want to be queen?

So, with the help of her Fabulous Godmother, she fights to make her dreams come true – even if the handsome prince keeps getting in the way.

The new Cinderella movie is a unique twist on the story, fitting a modern audience looking for a fresh take on the familiar tale.

The movie starts strong with an entertaining remix of Janet Jackson’s “Rhythm Nation,” where the town gets to sing and dance.

From there, many of the musical numbers were a whole lot of fun to watch – from the original song sung by Idina Menzel, “Dream Girl” to “Whatta Man” and even “Somebody to Love” – recalling Ella Enchanted’s own musical version of the same song.

The story is light-hearted and empowering, with a couple of entertaining romances. The Prince and Cinderella have a sweet romance, plus the Queen and King come together as they work through their differences (due to his misogyny).

THE NOT SO GOOD

However, a few parts in the film designed to be inspirational felt a little too self-absorbed. The whole “I choose me” statement, if not executed well, can lean more toward narcissistic self-absorption than the more inspirational message of following your dreams while also aligning them to a purpose. The message fell a little in-between.

Still, the female empowerment in the movie worked – especially when Idina Menzel was singing about it.

Overall, some of the dialogue was cringy, some of the music mixing messy, and the editing was choppy. But it still had a catchy soundtrack with cheery dance numbers.

The Cinderella 2021 cast includes Camila Cabello as Cinderella, Nicholas Galitzine as the prince, Billy Porter as the Fabulous Godmother, Idina Menzel as Vivian – the wicked stepmother, Pierce Brosnan as King Rowan, Minnie Driver as Queen Beatrice, James Corden as a mouse, Romesh Ranganathan as the other mouse, Tallulah Greive as Princess Gwen, Sanditon’s Charlotte Spencer as Narissa – one of the stepsisters, and Maddie Baillio as the other stepsister.

Camila Cabello wasn’t bad – her acting was decent, and her singing passable. But her musical style was not to my taste. Her words were often muffled, and I preferred a Broadway singing style like other cast members.

But it’s sure to please Cabello’s fans. And it’s not like I can begrudge her the chance to act in a movie – Christina Aguilera and Britney Spears both did it before her to middling success. And as a fan of both, I was the first in line to see their films (Burlesque and Crossroads).

The standout in this adaptation was, no doubt, Idina Menzel. She played the wicked stepmother to perfection, belting out pop numbers like the Broadway star she is. Billy Porter was also excellent as the Fabulous Godmother in a campy way. At the same time, Pierce Brosnan and Minnie Driver enjoyed chewing the scenery.

Overall, while it doesn’t have the heart of Ever After or the comedic charm of Ella Enchanted, it’s still a fun watch with good messages and a refreshingly diverse cast.

Some of the musical numbers worked better than others, but the mishmash of pop music felt a bit like Moulin Rouge for teens – which was enjoyable.

All in all, the new Cinderella was a pleasant diversion that may garner a cult following over time.

Have you watched the new Cinderella movie yet? What did you think of it? Did you love the film? Dislike it? Did you agree with our Cinderella review and were more in-between like us? Let us know in the comments below.