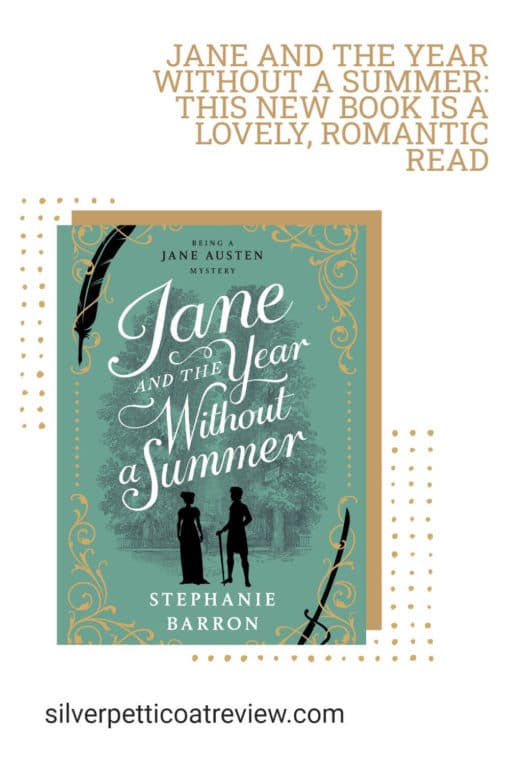 Disclosure: I received a free copy of Jane and the Year Without A Summer from the publisher/publicist. All opinions in the book review are my own.

OFFICIAL DESCRIPTION OF JANE AND THE YEAR WITHOUT A SUMMER

May 1816: Jane Austen is feeling unwell, with an uneasy stomach, constant fatigue, rashes, fevers and aches. She attributes her poor condition to the stress of family burdens, which even the drafting of her latest manuscript—about a baronet’s daughter nursing a broken heart for a daring naval captain—cannot alleviate. Her apothecary recommends a trial of the curative waters at Cheltenham Spa, in Gloucestershire. Jane decides to use some of the profits earned from her last novel, Emma, and treat herself to a period of rest and reflection at the spa, in the company of her sister, Cassandra.

Cheltenham Spa hardly turns out to be the relaxing sojourn Jane and Cassandra envisaged, however. It is immediately obvious that other boarders at the guest house where the Misses Austen are staying have come to Cheltenham with stresses of their own—some of them deadly. But perhaps with Jane’s interference a terrible crime might be prevented. Set during the Year without a Summer, when the eruption of Mount Tambora in the South Pacific caused a volcanic winter that shrouded the entire planet for sixteen months, this fourteenth installment in Stephanie Barron’s critically acclaimed series brings a forgotten moment of Regency history to life.

JANE AND THE YEAR WITHOUT A SUMMER REVIEW

Book Review: Jane and the Year Without a Summer is the 14th book in the Being A Jane Austen Mystery Series, and it is a page-turner full of mystery, romance, and historical authenticity!

Now, I haven’t read the previous books (although now I will!), but that didn’t deter me from absolutely loving this Regency mystery.

RELATED: 6 Reasons Hillary Manton Lodge’s ‘Jane Of Austin’ Should Be On Your Must-Read ASAP List

It works as a standalone but will make you want to read the rest of the brilliant series. Bestselling author Stephanie Barron writes Austen with intelligence, wit, and charm while creating a mystery worthy of Agatha Christie with proper twists and turns.

It’s the summer of 1816, and Jane Austen is feeling poorly. She and her sister, Cassandra, head to Cheltenham Spa to regain her health. But everything does not go as planned.

RELATED: Death on a Winter Stroll Review: This is an Exciting New Holiday Mystery Novel

The weather isn’t exactly ideal, and soon, Jane’s caught up in a murder mystery amid a group of intriguing and mysterious lodgers.

With Jane’s cleverness and observational skills, she sets out to solve the mystery while also spending time with the handsome (and swoony) Raphael West!

What I loved about this book is just how well Barron captures Jane Austen’s voice. Not only in her narrating style but as a person. The research into her life is incredible. And her writing style mirrors Austen’s own writing – while also creating a deliciously good mystery.

RELATED: 35 Romantic Movies and TV Shows Like Sanditon to Watch

While there is a bittersweet tone to the story and romance (historically, we know as readers Austen does not have much longer to live), it still leaves you feeling satisfied and wanting more.

Overall, I can’t recommend this book enough. While I expected a fun read, I didn’t expect it to be as enjoyable and well-written as it was. It’s now one of my personal favorites, and I think fans of Austen or Miss Fisher’s Murder Mysteries will love it.

The Jane Austen Mysteries (that could even be its title) needs to be a TV show as soon as possible. So, someone out there, please make this happen!

Have you read any of the Jane Austen Mystery book series? Do you plan to read the latest book? Once you do, let us know if you agree with our review of Jane and the Year Without a Summer! We’d love to hear your thoughts!

“Outstanding…Barron fans will hope Jane, who died in 1817, will be back for one more mystery.”— Publishers Weekly (starred review)

“No one conjures Austen’s voice like Stephanie Barron, and Jane and the Year Without a Summer is utterly pitch-perfect.”— Deanna Raybourn, bestselling author of the Veronica Speedwell Mysteries

“Jane and the Year Without a Summer is absolute perfection. Stephanie Barron expertly weaves fact and fiction, crafting a story that is authentically Austen in its elegance, charm, and wit. The characters and setting will enchant you, and the mystery will keep you guessing to the last page. This Regency-set gem is truly a diamond of the first water.”— Mimi Matthews, USA Today bestselling author of The Siren of Sussex

Francine Mathews was born in Binghamton, New York, the last of six girls. She attended Princeton and Stanford Universities, where she studied history, before going on to work as an intelligence analyst at the CIA. She wrote her first book in 1992 and left the Agency a year later. Since then, she has written twenty-five books, including five novels in the Merry Folger series (Death in the Off-Season, Death in Rough Water, Death in a Mood Indigo, Death in a Cold Hard Light, and Death on Nantucket) as well as the nationally bestselling Being a Jane Austen mystery series, which she writes under the penname, Stephanie Barron. She lives and works in Denver, Colorado.

2 thoughts on “Jane and the Year Without a Summer: This New Book is a Lovely, Romantic Read”