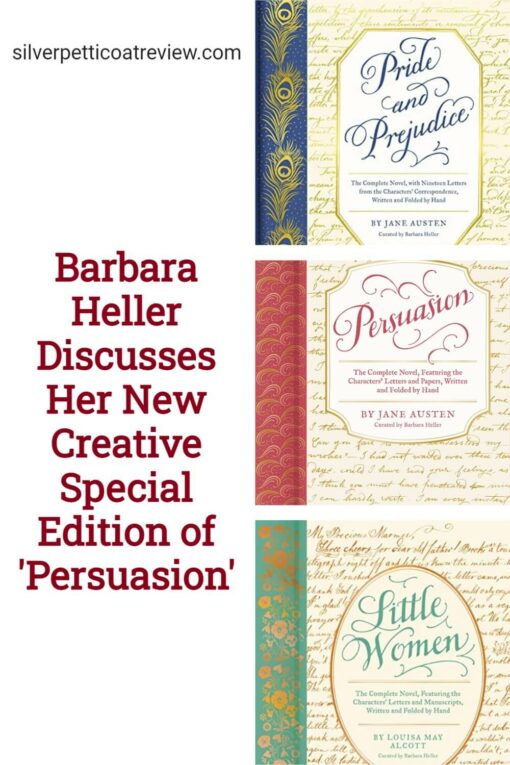 Barbara Heller, the curator behind the deluxe new editions of Jane Austen’s Pride and Prejudice and Louisa May Alcott’s Little Women, has joined us at The Silver Petticoat Review to discuss her latest project: a new special edition of Austen’s classic novel, Persuasion.

The gorgeous new collector’s edition has historically accurate handwritten letters and vintage ephemera, all folded by hand – including the famous romantic letter from Captain Wentworth to Anne Elliot.

Heller has received praise from The New York Times, the Smithsonian, and more for magnificent special editions of classics! Besides being the curator of these deluxe editions, she is also a writer and a director and works as a set decorator for film and television.

She’s kindly joined us for a Q&A to discuss her background, the process of putting together these books, what classic she may be working on next, and more.

AMBER TOPPING: I would love to hear a little about your background and how you became a set decorator for film and television, as well as a writer, director, and curator of beautiful special editions of classic novels.

BARBARA HELLER: Before becoming a set decorator, I location-managed many films. Finding a location that visually captured a character’s individuality and furthered the story was my favorite part of the job – negotiating the contracts and overseeing the permits, less so.

Eventually, I switched to the art department. Now I enjoy finding the furnishings for the sets to reveal character. For the letters, it’s similar. I want every little detail to capture the writer and his or her mindset while putting pen to paper.

Whether the handwriting is angular or loopy, cramped or sprawling, slanted on the page or perfectly straight, it conveys meaning. As does the color of the ink, number of blots, scratch-outs, and choice of stationery.

Do you remember when you first became a fan of Jane Austen?

Tenth grade, visiting my eldest sister in Austin, Texas. I idolized my sister, so when she gave me P and P to read, even though I felt the title was moralizing and the cover dreary, I read it anyway. I was enthralled, astonished by its humor.

I love any opportunity that immerses me in Austen – though the idea of creating Wentworth’s letter was both a draw and a terror as it means so much to so many.

The ephemera was especially intriguing because several pieces physically embody a central conflict in the story: the Baronetage represents Sir Walter’s beloved hereditary aristocracy, while the Navy List symbolizes the rise of a new meritorious class.

Sir Walter moves out of the ancestral home, Kellynch Hall, and Admiral Croft, “a nobody,” moves in.

I would love to hear more about your research and any fascinating stories you have about your experience.

Reading multiple editions of The Bath Chronicle to find ads and notices to surround the column announcing Lady Dalrymple’s arrival gave me a thrill. There were the notices for the balls and concerts in the upper and lower assembly rooms that Austen, and her characters, attended.

I made my selections based on their relevance to Persuasion and the other novels: a Gretna Green marriage reminded me of Lydia Bennet; a young woman seeking a position as a governess was almost Jane Fairfax, a boarding school ad brought Mrs. Goddard from Emma to mind.

I left out the reports of the many horrendous fires and grisly robberies as Austen herself doesn’t go there.

What went into creating reproductions of these documents? What was the process?

It’s involved! I spend acres of time finding the right period handwriting references for each character. Wentworth proved tricky – his writing is rushed and emotional, and that’s hard to identify in unfamiliar handwriting.

However, I found some wonderful material in the special collections of the New York Public Library. Calligraphers Christopher Calderhead and Eugenia Uhl diligently created millions of samples for Wentworth and Mary, respectively, until each detail of the writing reflected the character.

RELATED: Excerpt and Interview: An Autumn Kiss – Find Out About the New Victorian Romance

The size, texture, and color of the paper they write on is experimented with as well with until I feel an inner zing. If possible, I have the calligraphers write on one-hundred-year-old paper that is naturally aged, but because those pieces are scarce, often the aged paper is scanned and digitally layered with the calligraphers’ work.

Alexandra, the graphic artist, enhances the aging and fixes any errors. That sounds a lot simpler than it really is! Alexandra also recreated the Navy List, Bath Chronicle, and concert bill based on the originals.

Jane Austen’s books are timeless and can be read again and again. But these special editions bring the joy of rereading to a new level! For example, reading the new special edition of Persuasion brings an aspect of fantasy – and reminds me of the excitement reading brought me as a child.

Holding an actual letter in my hand (especially Captain Wentworth’s), among other paper ephemera, brought the novel alive in new ways and gave me a little thrill of excitement. Do you find other readers are experiencing your special edition of classic books similarly? Was that your intent?

That is exactly my goal, and lovely to hear. For me, reading and examining what the characters held in their hands deepens my connection to the story. I want the letters and ephemera to transport the reader across time.

Captain Wentworth’s letter to Anne is one of the greatest fictional love letters of all time. Why do you think his letter continues to inspire readers? What makes it so memorable from your perspective?

I can’t answer this one because Deborah Yaffe, author of one of my favorite reads, Among the Janeites, has already done it so beautifully in this essay.

Do you have any future special editions in the works?

I just started the research for a special edition of Anne of Green Gables.

How can readers best follow you and your future projects?

Thank you, Barbara, for talking with me about your new book. I appreciate you taking the time to share your thoughts on this gorgeous new edition. And I look forward to following your future projects.

MORE ABOUT THE NEW SPECIAL EDITION OF PERSUASION

Jane Austen (author) (1775–1817) was a British writer. Persuasion was her last completed novel, published six months after her death.

Barbara Heller (curator) is a set decorator for film and television and a writer and director of award-winning short films. Her previous books include special editions of Pride and Prejudice and Little Women. She lives in New York City.

OFFICIAL DESCRIPTION OF PERSUASION BY JANE AUSTEN AND BARBARA HELLER:

This special edition invites fans inside the world of Anne Elliot. It includes the full text of Persuasion, plus gorgeous, removable replicas of the characters’ letters and other paper ephemera.

Captain Wentworth’s letter to Anne Elliot remains one of the literature’s most unforgettable confessions. It is the jewel at the heart of Persuasion, Jane Austen’s captivating story of second chances and enduring love. Throughout the story, letters, newspapers, maps, and other paper ephemera reveal the characters’ deepest motivations and shape their destinies. Anne’s snobbish father obsesses over a written history of their noble family, and a page from the Bath Chronicle reveals the elaborate social scene of the town where the lovers are finally reunited.

This deluxe edition brings all of this and more to life. As you read the novel, you will find pockets throughout containing replicas of thirteen items from the story, re-created with exquisite calligraphy and painstaking attention to historical detail. For anyone who loves Jane Austen or still cherishes the joy of letter writing, this book deepens the experience of a favorite story in an entirely new way.

BELOVED STORY: PERSUASION is a much-beloved classic, cherished by romantic readers everywhere. This project hits all the sweet spots for Austenites while offering something new to beguile them.

PERSUASION ADAPTATIONS IN THE WORKS: With not one but two new film adaptations of Persuasion on the horizon, now is the perfect time to revisit the original text in a unique way, with physical ephemera that links you directly to Austen’s world.

UNIQUE FORMAT: From the masterful calligraphy to the painstaking attention to historical detail to the hand-folding of the letters to the quality of the materials—each book is an object made by fans for fans. This edition offers an immersive experience of the story, stands apart on the shelf, and makes for a truly lovely gift and keepsake.

Want to hear more praise about Heller’s new edition of Persuasion? Check out our complete review!

BUY THE BOOK BY BARBARA HELLER

The book is available on Amazon, Bookshop.org, and Chronicle Books.