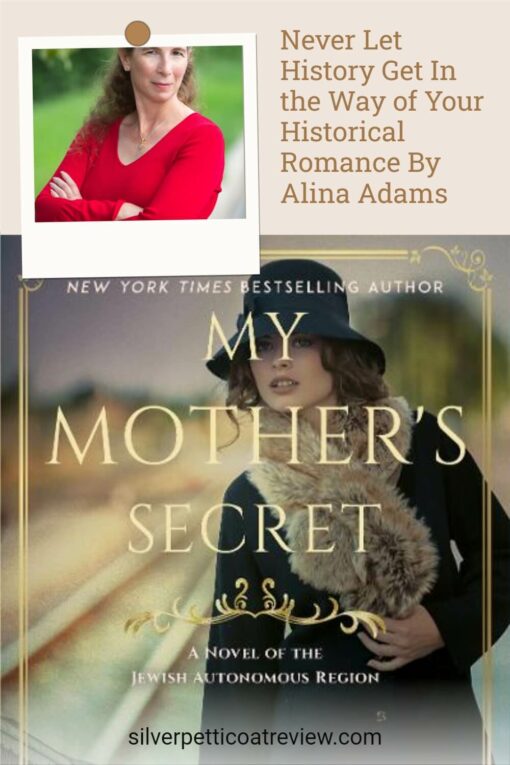 It’s bad enough when the present and future don’t work out the way you need them to, romantically speaking. But wouldn’t you expect better from the past?

As soon as I learned about Birobidzhan, the Jewish Autonomous Region set up in the 1930s on the border between Russia and China by Josef Stalin, of all people, and pronounced the place where all the persecuted Jews of the world would come to and live safely under the auspices of Communism; I knew I had to set my next historical romance novel there.

My last one, The Nesting Dolls,  followed a Soviet-Jewish family from Odessa, Ukraine, to Brighton Beach, Brooklyn. So many readers told me they had no idea what the USSR was like in the 1930s, including Stalin’s Great Terror, that I decided my next book would continue through that time period, only set in a place even fewer had ever heard of.

Don’t worry; I did my research. I read Masha Gessen’s book, Where the Jews Aren’t, and I watched Seekers of Happiness, a propaganda movie made in Russian and Yiddish to convince Jews to move there. I dove into Swarthmore College’s archives on the subject.

So, I knew exactly how everything happened.

And then, I started writing the book that became, My Mother’s Secret: A Novel of the Jewish Autonomous Region. And my characters started doing things. Which didn’t quite line up with history as it happened.

I needed a train to arrive in the middle of a rainy night. The better setting for my heroine to first encounter my hero.

Did it matter that the train she would have taken historically arrived in the daytime? And not during the rainy season?

I also needed there to be a second train across the platform. I wanted my heroine to see the ethnic Koreans that Stalin was having deported for the sin of being… ethnic Koreans.

(Well, the official reason was that they were Fifth Columnists plotting with Japan against the USSR. But considering how many of them were young children, we can assume that not everyone was a spy, and the dominant reason for “resettling” them in the colder parts of Siberia was still the being ethnic Korean thing.)

RELATED: Shadowboxing: The Inspiration for Easy Does It (Bank Street Stories Book 1)

Should I worry excessively that the train station only had one track, so it would have been impossible for one train to arrive just as another was leaving?

And then we get into actual dates. Growing up as a Soviet immigrant in America, I’d heard a story of how, during World War 2, someone my grandparents knew prayed for Franklin Roosevelt to open a Second Front to distract Hitler from his merciless attacks against Russian troops.

When Roosevelt finally did so, this woman named her daughter Eleanora in honor of the American president’s wife, Eleanor.

I thought that was a perfect story behind the character of Lena’s name. But the Second Front didn’t happen until June 1944.

So, when deciding when Lena’s parents would have sex, I wasn’t going by their feelings for each other, or opportunity, or convenience. I was going by nine months – give or take – before D-Day. That’s some serious family planning!

The same went for that first meeting at the train station. I needed to find a date after Stalin had started randomly arresting former allies (especially Jews) in Moscow, but during the time when he was deporting ethnic Koreans, yet with enough time for my hero and heroine to fall in love before the aforementioned D-Day.

I think I managed to squeeze in everything I needed to – both real-life historical events that make up the background of My Mother’s Secret: A Novel of the Jewish Autonomous Region and the made-up romance at the forefront of it.

Some historians may quibble. And some romantics may feel parts are rushed… while others might drag on for too long.

Which is why I now feel compelled to ask readers: What’s more important, historical accuracy or unrestrained love? How accurate do you need your history to be in a historical romance? Should it ever take precedence, or does love truly conquer all?

I’m dying to hear your thoughts on the matter!

Alina Adams is the NYT best-selling author of soap-opera tie-ins, figure skating mysteries, and romance novels. She was born in the USSR and immigrated with her family to the United States in the 1970s. My Mother’s Secret: A Novel of the Jewish Autonomous Region is scheduled for a November 15, 2022 release. Visit her at: www.AlinaAdams.com.

You can pre-order the book here.

BOOK DESCRIPTION OF MY MOTHER’S SECRET: A NOVEL OF THE JEWISH AUTONOMOUS REGION

With his dying breath, Lena’s father asks his family a cryptic question: “You couldn’t tell, could you?” After his passing, Lena stumbles upon the answer that changes her life forever.

As her revolutionary neighbor mysteriously disappears during Josef Stalin’s Great Terror purges, 18-year-old Regina suspects that she’s the Kremlin’s next target. Under cover of the night, she flees from her parents’ communal apartment in 1930s Moscow to the 20th century’s first Jewish state, Birobidzhan, on the border between Russia and China. Once there, Regina has to grapple with her preconceived notions of socialism and Judaism while asking herself the eternal question: What do we owe each other? How can we best help one another? While she contends with these queries and struggles to help Birobidzhan establish itself, love and war are on the horizon.

New York Times Bestselling author Alina Adams draws on her own experiences as a Jewish refugee from Odessa, USSR as she provides readers a rare glimpse into the world’s first Jewish Autonomous Region. My Mother’s Secret is rooted in detailed research about a little known chapter of Soviet and Jewish history while exploring universal themes of identity, love, loss, war, and parenthood. Readers can expect a whirlwind journey as Regina finds herself and her courage within one of the century’s most tumultuous eras.

By The Silver Petticoat Review on November 1st, 2022