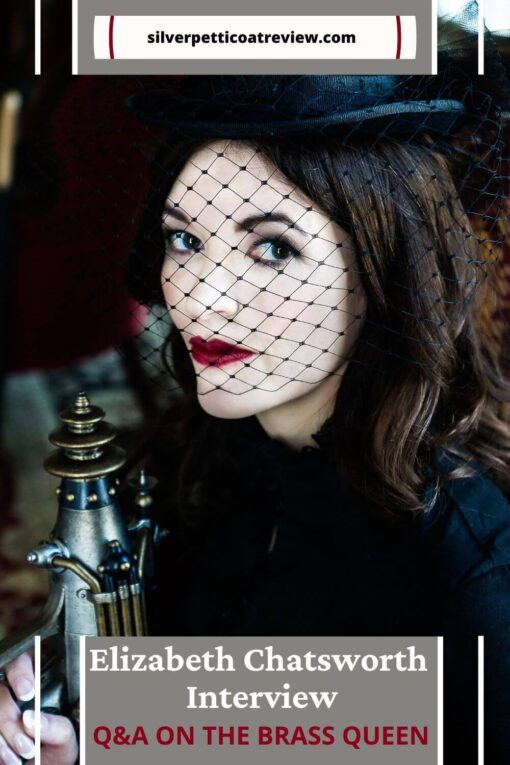 Elizabeth Chatsworth is the debut author of the Gaslamp fantasy novel, The Brass Queen. She discusses her writing inspiration, the “Brassiverse,” and when we can expect book two in the series.

The Brass Queen is the brand-new novel (a perfect blend of adventure, Gaslamp, steampunk, rom-com, and historical fantasy) by author and Writers of the Future winner Elizabeth Chatsworth. She’s a successful voice actor who turned her storytelling talents into creating an inventive story world you’ll love escaping into.

With fabulous reviews from Publishers Weekly, Library Journal, and more, you’ll want to find out more about this captivating new book and the talented author behind it. Elizabeth Chatsworth is sure to become a favorite of fantasy and romance fans for years to come.

We emailed Chatsworth these questions to talk about The Brass Queen (our Silver Petticoat Book Club pick for February), her voice acting background, and what’s next with the imaginative fantasy series.

AMBER TOPPING: Congratulations on your debut novel, The Brass Queen. Can you tell me a little bit about your background and what inspired you to become a writer?

ELIZABETH CHATSWORTH: I was born and raised in the steel-making city of Sheffield, in Yorkshire, England. As a child, I loved the city’s Victorian architecture and the Baroque splendor of nearby stately homes.

When it came time to write my novel, metalworkers and aristocrats were the first characters that sprang to mind. The rest, as they say, is alternate history!

How did your background in voice acting affect your process as a creative writer? What was it like narrating your own audiobook?

I act out the scenes before I write them. This helps me to get a sense of how a character would behave in any given situation. For instance, Constance is likely to stomp into a room to share her (often misinformed) opinion on the matters at hand.

Laid-back Trusdale prefers to avoid unnecessary conflict and always keeps one eye on the exit. Such characters will react differently to a shared experience. After acting out a scene, if the dialogue and action feel natural to the characters, I write it down!

As a voice actor, I specialize in performing corporate scripts. These tend to be quite short, so narrating an entire novel is an entirely different experience. It’s physically and mentally exhausting to perform an audiobook, even when you’ve written the book in question!

I enjoyed voicing Constance’s part the most, although I had to stop waving my hands around as much as I think she would do when talking to people. Studio engineers don’t appreciate hands wafting near their highly sensitive (and expensive!) microphones.

What can you tell readers about your new book? Why should they read it?

In an alternate version of Victorian England, the “Brass Queen” is the underworld alias of my strong-willed British heroine, Miss Constance Haltwhistle. The only daughter of a Baron, Constance has propped up her ailing family estate’s finances by designing and selling illegal exotic firearms across the globe.

When a greedy relative attempts to force Constance out of her home, she and her staff embark on a quest to save the estate. But fate has a wicked sense of humor, and Constance is pulled into a search for kidnapped scientists who happen to have invented an invisibility serum.

As royal foes plot to start a world war, Constance and her newfound ally, the U.S. cowboy-turned-spy, J. F. Trusdale, must step up to become the heroes they never wanted to be.

If you like to read about rule-breaking female protagonists, you’ll appreciate Constance’s bold, fearless take on life. Obsessed with maintaining her ancestral estate, she’s never quite learned the complex rules that govern high society.

She’s outspoken, opinionated, and comically incorrect in many of her assumptions about life. She’s a heroine who isn’t afraid to be exactly who she is, whether people like her or not! Underneath her bluster, she cares deeply for those she has sworn to protect. Those closest to her love her for her many faults as much as her numerous virtues.

I recently finished reading the book, and I LOVE it. I especially love the witty repartee between Constance – aka The Brass Queen, and Trusdale, an American cowboy spy. What inspired you to match up these two? And how much fun was it writing their scenes together?

In real life, I’m a British expat who married an American. Much of our courtship revolved around comic misunderstandings and twists of fate that inevitably drew us closer together.

In many ways, Constance and Trusdale’s banter is an extreme version of the cultural misunderstandings and preconceptions that my husband and I had about each other. Now, of course, we fit together perfectly. Love truly does conquer all!

I had so much fun writing the scenes where Constance and Trusdale verbally spar. I always kept in mind the fast-paced, overlapping banter of classic screwball comedy movies such as Bringing Up Baby or His Girl Friday.

These movies provided a place to explore female power and class tensions within a broad comedic framework. The Brass Queen explores the same themes set against a steampunk background.

The worldbuilding also really stands out in this novel. What was your process in creating this Victorian fantasy world?

All of the fantastical steampunk inventions are loosely based on real Victorian science. For instance, the snail-train monorail that runs over my alternate Sheffield’s city center is a whimsical interpretation of actual nineteenth-century monorails.

Politically, I imagined what our world might be like if the French revolution had not happened, and power and wealth remained largely in the hands of European royalty. For Constance, the fact that Queen Victoria is a despotic monarch who has used her private army to disband parliament is utterly unremarkable. She barely notices the Queen’s redcoat soldiers patrolling the city center until she becomes a fugitive.

By giving real historical figures, events, and technology a satirical twist, our alternate Britain is a familiar, yet alien world. Hopefully, this blend of the ordinary and extraordinary make it a fascinating place to visit!

On your website, I discovered that you have a few fun story extras for readers to look at, like a map and the Pinder’s Print Emporium website. The Brass Queen seems like the perfect story to incorporate transmedia (telling stories across media platforms) elements. Are there more transmedia extras you intend to integrate into your story world in the future?

Indeed, there are! If you head to the Goodies page on my website, you’ll find an animated book trailer, character artwork, and even a chap hop rap song about Constance performed by Professor Elemental. Film, music, and art are a vital part of the Brass Queen’s universe, or “Brassiverse,” as I like to call it.

I intend to create more stories and in-world artifacts, such as the engraved invitation to Constance’s ball. I hope this novel will inspire readers to create their own art and artifacts, or perhaps even to cosplay the characters!

Are there any specific writers or storytellers that inspired you?

As a child, I loved the fantastical worlds of Diana Wynne Jones and J. R. R. Tolkien. Later, I was drawn to humorous speculative fiction writers, including Terry Pratchett, Neil Gaiman, and Douglas Adams.

Jane Austen is my favorite romance author, but I adore many contemporary writers, too, from Christina Lauren to Julia Quinn. In the steampunk realm, Cherie Priest, Cat Rambo, Genevieve Cogman, Gail Carriger, and Leanna Renee Hieber are my perennial favorites.

What was your journey to publication? And what advice do you have for other authors?

As my fiftieth birthday loomed, I took stock of my life. I’d always been an avid reader, but somehow, I’d never made the time to create my own stories. So, I decided to sign up for an online creative writing class. The instructor, best-selling author David Farland, encouraged my fledgling efforts, and my first assignment turned into chapter one of The Brass Queen. Six years later, the book I started in class has been traditionally published. The moral of the story is that it’s never too late to start anything!

My main advice to writers is to try and enjoy the creative journey for its own sake. Publication is a worthy goal, but it may not be enough to keep you motivated as you go through months or years of rejection. By enjoying the creative process, I’ve spent time with my characters in a world that no one else could create, and ultimately, it’s been a fun adventure! I hope you have the same experience.

Is there going to be a sequel to The Brass Queen? It could be read as a standalone, but I also feel like there is so much more to explore with these characters. I would love to go on more adventures with Constance and Trusdale.

I’m delighted to share that The Brass Queen and her motley crew are heading for new adventures! The second book in the series is tentatively scheduled for spring 2022.

What is the best way for fans to follow you?

I’m on several social media sites, and I also have a newsletter you can subscribe to for exclusive updates and giveaways.

Interested in reading the book? Here are some BUY LINKS.

If you want to join in the fun, make sure to read The Brass Queen with us during February 2021 for The Silver Petticoat Book Club. Read all the details HERE.