Halloween isn’t a holiday I personally pay any attention to nor has it been one I’ve celebrated. That said, one way I acknowledge the day is by indulging in Gothic or spooky period dramas. This is a pastime I am familiar with and very fond of.

As I thought about ideas for this list, I realized we are in October, the month that concludes with All Hollow’s Eve (or Halloween as it’s commonly referred to). Bearing this in mind, ideas began to swirl, the primary of which being, “How many creepy period dramas are there?” Of course, my question led to some research and eventually, the discovery that yes, there are indeed a number of spooky period dramas.

Below I’ve listed 20 of them for your reading pleasure in one neat little collection. Some of them are spookier than others (varying widely in era). Some are more Gothic than they are frightening, and to keep things interesting, there are even one or two ghost stories on the list. I also included a few fairy tales that are period drama like. Quoting a Dickens character, in short, if you continue on, you’re sure to find something for everything (including some swoony romance).

I suspect anything by Agatha Christie would be a perfect choice for those looking for a first-class mystery. (Some of my favorites are ITV’s Marple.) But there is none creepier than BBC’s brand-new adaptation of And Then There Were None. This is a chilling story like none I’ve ever seen. The series crescendos towards a very dark place.

Content: This one earned a TV-14 rating for some strong language and its mature emotional nature. Though in some episodes, it should be TV-M.

Stream And Then There Were None on Acorn TV.

Those of you who like the darker Grimm brothers fairy tales would find this fantasy of interest. Plus, it stars the late Heath Ledger.

This isn’t a film I’ve seen, but it does make me curious. The atmosphere looks spooky and because of this, the setting seems like it’d be a “pretty” (the costumes, and appearance) Victorian ghost story. However, this film isn’t for the faint of heart.

Content: Crimson Peak is rated R for a scene of sexuality, adult themes, and a few scenes of strong violence.

Purists of Jane Austen’s period drama, Pride and Prejudice might not want to watch this one, but if you’re able to sit back and enjoy, this is a fun “sequel.” It continues the love story of Lizzie and Darcy a handful of years later, and let me tell you, the flirting between these two? Too cute for words.

Content: There is one sex scene (non-graphic) and a murder.

This is one I’ve not seen. But the trailers impress me. Plus the cast list boasts many familiar period drama faces from Luke Evans (The Three Musketeers, 2017’s Beauty and the Beast) in the titular role to Sarah Gadon (A Royal Night Out) and Dominic Copper (The Duchess, Sense and Sensibility). 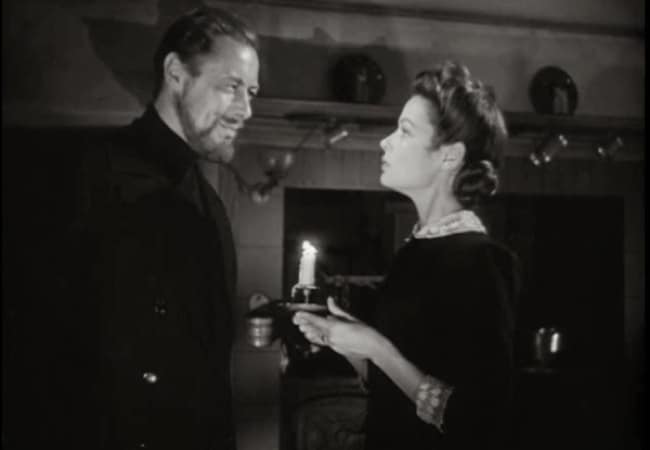 This romantic period drama is a ghostly classic when a woman falls in love with a grumpy sea ghost!

Around the same time as this 2006 Edward Norton period drama released, another film (The Prestige) also appeared in theaters. This is the better one stylistically and is, unarguably the more romantic. Rufus Sewell and Jessica Biel co-star.

Content: There is some sensuality and minor violence. The film is rated PG-13.

Buy The Illusionist on DVD.

Starring Downton Abbey alum, Jessica Brown Findlay, I’ve been anxious to watch this. Set in the 1800s, it follows the life of a young woman who lost her parents and the romantic pull she feels for the younger brother of her aunt’s husband. Based on the novel by Daphne Du Maurier.

Stream Jamaica Inn on Acorn TV or on Netflix.

What list would be complete without an adaptation of the classic Charlotte Bronte story about a penniless orphan undertaking governess duties at the haunted Thornfield Hall? None I’d say. As for a favorite adaptation of this story, I’m wavering between the 2006 BBC adaptation or the 2011 feature film. Though I also recommend the 1983 adaptation as a choice.

Content: Depending on the version you watch, the ratings fluctuate from PG to a minor PG-13.

Rent Jane Eyre (2011) on Amazon Video or stream on Netflix. You can stream Jane Eyre (2006) on Dramafever and Hulu.

A retelling of the classic Hitchcock story, this recent BBC 1930s mystery is more “cozy” than scary. That said, it does build to a darker reveal that ends without completing one story thread.

Content: Nothing beyond a PG rating (a few “tense” scenes and minor innuendo).

This Masterpiece Theatre production is definitely underrated. There are some creaking stairways, creepy dark hallways, and freaky shenanigans, but for those who aren’t a fan of “scary horror,” this might be your ideal.

Content: Though unrated, this would earn a solid PG-13 classification. There are two scenes of sensuality, and it’s, generally, a dark drama.

Rent The Making of a Lady on Amazon Video.

12. Murder on the Home Front

Set during WWII, this one is about the onset of forensic investigation. Despite its subject matter and setting, it manages to be a fun mystery thanks to the characters and their personalities.

Content: There are some instances of crude humor and a brief scene that shows a prostitute with a client. The film is rated TV-14.

Rent Murder on the Home Front on Amazon Video.

13. The Mystery of Edwin Drood

Though all of Dickens films cling to a sense of darkness, I think this is one of the “creepiest.” A Victorian mystery, it features one of the best villain performance I’ve seen. Ironically, Matthew Rhys, who plays Darcy in Death Comes to Pemberley. If you’re anything like me, perhaps watch it before The Mystery of Edwin Drood.

Content: There’s some violence (suicide and flashback to a murder); a man threatens a woman once and tears her dress.

Rent The Mystery of Edwin Drood on Amazon Video.

14. The Mystery of a Hansom Cab

I’ve been looking at this one for a long time, and finally, I saw it. It’s an Australian drama that manages to be a “proper” mystery complete with fog infused cobbled streets. Plus, for those curious, not only is the romance all old-fashioned charm, it’s also (in my opinion), an important thread to the story.

Content: Brief upper female nudity and a murder scene would give this one a soft PG-13 rating.

Purchase The Mystery of a Hansom Cab on DVD.

A Disney film about the feared villain of Sleeping Beauty? A must for fans of Disney films or fairy tales. (Plus you can see Sam Riley before he was Col. Darcy in Pride and Prejudice and Zombies)

Content: Maleficent is rated PG for some minor fantasy violence (though younger audiences might be frightened by Maleficent and the creatures she employs).

16. Pride and Prejudice and Zombies

Speaking of Pride and Prejudice and Zombies, would this list be complete without this frothy bit of fun? Nope, not on my watch.

Content: There is some zombie violence, and blood resulting from injuries by swords. The film is rated PG-13.

Buy Pride and Prejudice and Zombies on Amazon Video.

18. Snow White and the Huntsman

A dark re-telling of the Snow White fable, this film has an atmosphere sure to make you shiver. Perhaps its prequel-that-wound-up-being-a-sequel, The Huntsman is, overall, the better film, but this one fits the theme better.

This is another I’ve not seen, but it’s well known as a “ghost story” and is supposed to be a chilling story. It’s a story by Henry James about a governess and the strange children under her care. BBC’s 2009 remake first cast Michelle Dockery and Dan Stevens (Downton Abbey) together and the ’90s Masterpiece version stars Colin Firth and Jodhi May.

Rent The Turn of the Screw on Amazon Video.

What list is complete without a fun romp? None I’d say. Plus this one stars the always affable Hugh Jackman (I’m telling you, it’s the accent).

Content: This is rated PG-13 for frightening fantasy violence and some sensuality.

Are there any Gothic, spooky or horror films you watch this time of year? Comment down below and tell me if you’ve seen any of these or share which mysterious period dramas are among your favorites. I’d love to talk about them.

Our romance-themed entertainment site is on a mission to help you find the best period dramas, romance movies, TV shows, and books. Other topics include Jane Austen, Classic Hollywood, TV Couples, Fairy Tales, Romantic Living, Romanticism, and more. We’re damsels not in distress fighting for the all-new optimistic Romantic Revolution. Join us and subscribe. For more information, see our About, Old-Fashioned Romance 101, Modern Romanticism 101, and Romantic Living 101.
Pin this article to read later! And make sure to follow us on Pinterest.
By Rissi JC on October 24th, 2016