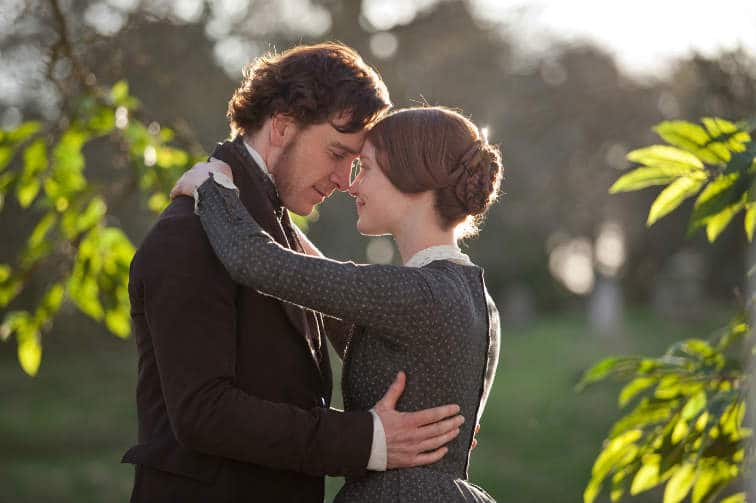 THE MOMENT: Edward begs Jane to stay with him.

Confession Time: The gothic era has never really been my thing. But then, perhaps part of this stems from my ineptitude to read the novels on which the classic films are inspired by. Still, I thoroughly enjoyed the touches of gothic in The Making of a Lady, and with each viewing, I’ve grown to appreciate it even more. The one gothic romance, however, I did always find fascinating from day one was the Charlotte Bronte classic Jane Eyre and the gorgeous love story between Jane Eyre and Mr. Rochester.

Something about it was enchanting as if it walked through a beautiful kind of darkness. Maybe it was the fact that I grew up with the 80s Timothy Dalton version (which is really quite good despite its misfortune to have been produced in the 80s) or maybe it’s the Beauty and the Beast themes or the complexities of forgiveness. Either way, this, in many of its reincarnations has always been one of my favorites.

The version of Jane Eyre that I’m most fond of is the most recent box office adaptation. Released in 2011 and starring the fabulous British talent that is Michael Fassbender, this version (to me) feels poetic. It’s quieter than the norm (even for this story) without the usual passion and gumption of earlier versions, which is all part of the reason it works so beautifully. The story remains true to its classic canon. It’s about the titular character taking a governess position at Thornfield Hall. Once there, Jane encounters a series of strange ghostly happenings but ultimately cannot resist the pull of her employer, Mr. Rochester, with whom she falls in love.

The Lead In: Jane Eyre and Mr. Rochester 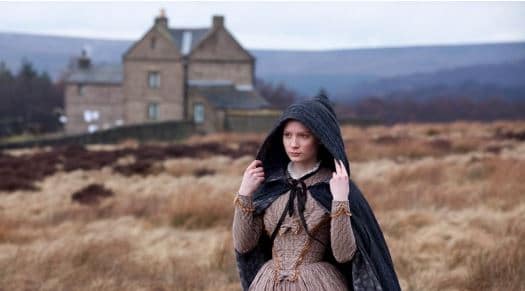 The relationship between Jane and Edward Rochester is predicated on their intelligent conversations (he finds her a very intriguing person) and the fact that Jane is an innocent who remarks on fearing she’ll pass through life without knowing how to talk to men. It’s Jane’s humility that draws Edward to her, including a conversation between them when he confesses his feelings to Jane. The results of which she doesn’t understand, believing him to be talking about the women he is said to be courting, Blanche Ingram.

Rochester’s words are full of love as he sits on the steps following Jane helping him see off the mysterious visitor known only to her as “Mason.” He says, “This spring, I came home heart sore and soul withered. Then I met a gentle stranger whose society revives me. With her, I feel like I could live again in a higher, purer way.” Looking up at Jane, he continues. “Tell me… am I justified in leaping over an obstacle of custom to obtain her?”

In her naivety, Jane replies, “If you cherish an affection, sir than fortune alone cannot impede you.” Assuming it’s Blanche of whom he speaks, Jane is bewildered when he tells her the following.

“I am asking what Jane Eyre would do to secure my happiness.”

Following her return to Thornfield Hall (having been gone to visit her ill Aunt Reed), Jane learns from Mrs. Fairfax that Rochester is to be married. Finding him in the courtyard, Jane offers congratulations, mentions she’ll be looking for a new position, and walks off into the surrounding wild to be on her own. Following, Edward soon catches up to her. 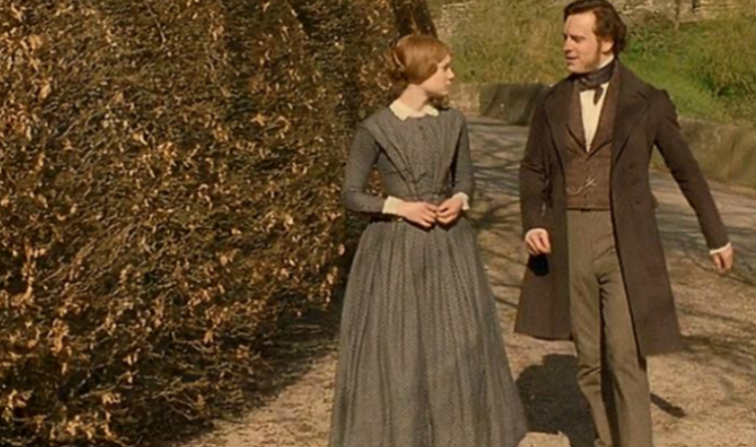 He begins, asking, “Thornfield is a pleasant place in summer, isn’t it?” Continuing to hope she’ll remain at Thornfield, Edward makes the following observation. “You’ll be sorry to part with it. It’s always the way with events in life. No sooner have you got settled than a voice cries ‘rise and move on!’ I’ll find you a new situation Jane, one I hope that you’ll accept.” 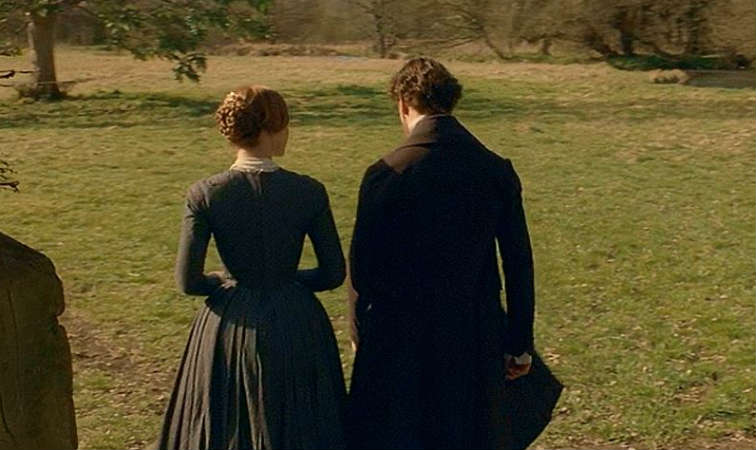 With reservation, she replies, “I shall be ready when your order to march comes.” 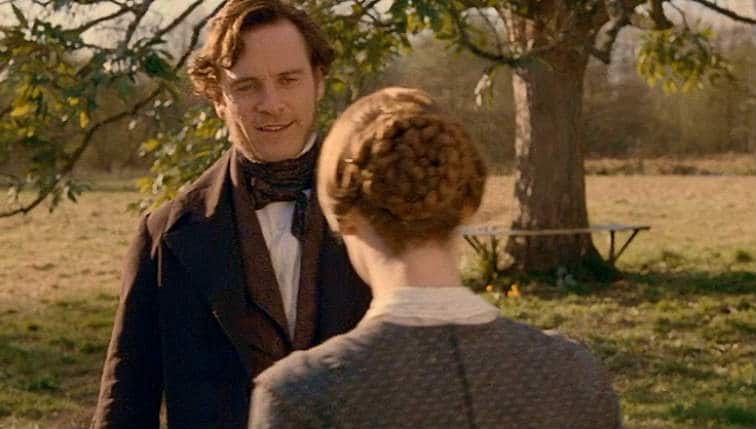 Coming to stand in front of her, Rochester blocks her way, forcing her to come to a standstill. “Must I really lose a faithful paid subordinate such as yourself? …We’ve been good friends, haven’t we?” 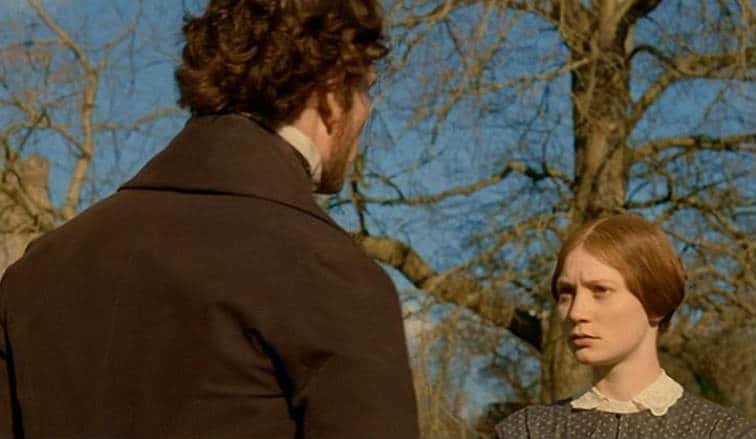 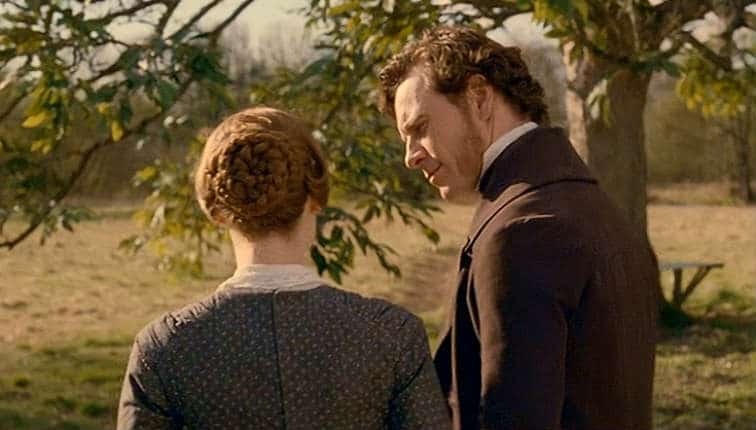 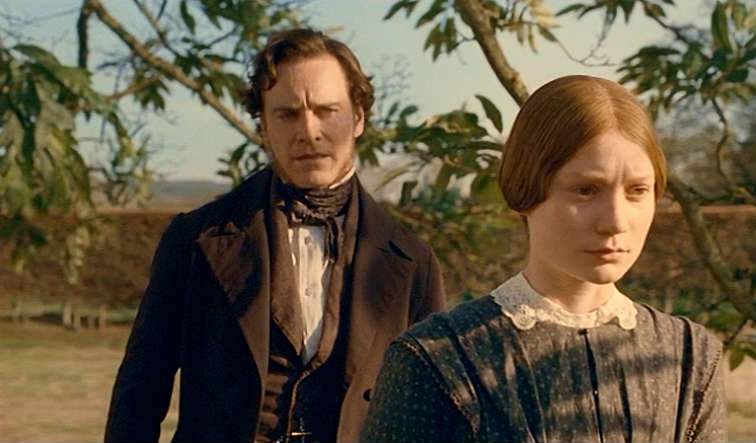 As they come upon a large, wide kind of tree, underneath it Rochester confesses his feeling towards Jane. “I have a strange feeling with regard to you: as if I had a string somewhere under my left ribs, tightly knotted to a similar string in you. And if you were to leave I’m afraid that cord of communion would snap. And then I’ve a notion that I’d take to bleeding inwardly. As for you – You’d forget me.” 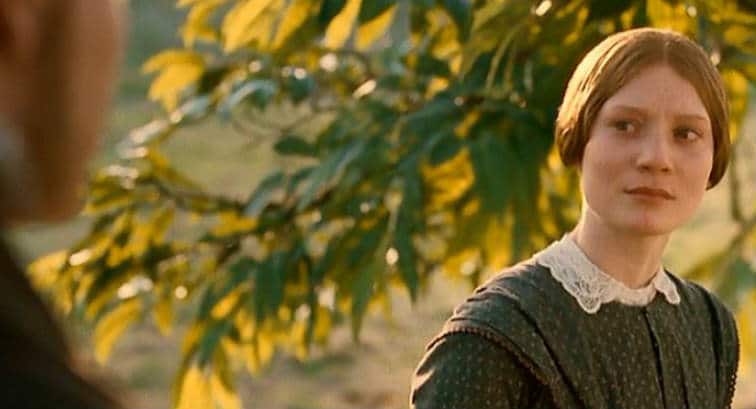 Pausing, in distress, Jane expresses regret at his words. With feeling, she lets her experience of living in Thornfield hall escape her. “I have lived a full life here. I have not been trampled on. I have not been petrified. I have not been excluded from every glimpse that is bright. I have known you, Mr. Rochester and it strikes me with anguish to be torn from you.” 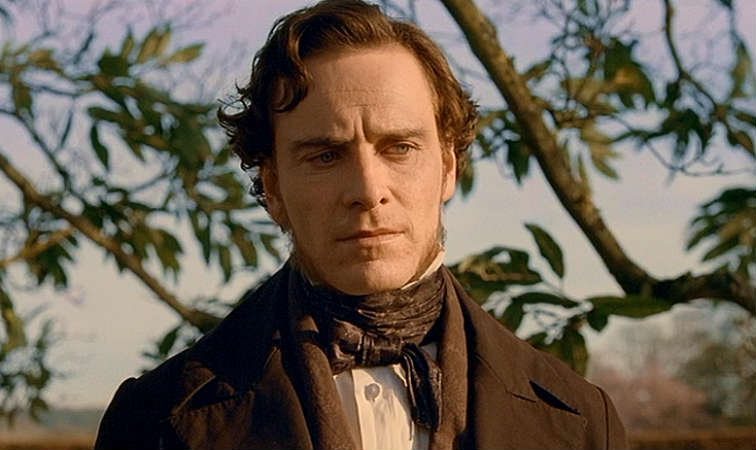 In reply, and with humble sincerity, he asks “Then why must you leave?”

Believing him to be on the verge of proposing marriage to Miss Ingram, Jane doesn’t understand his attempt yet again. 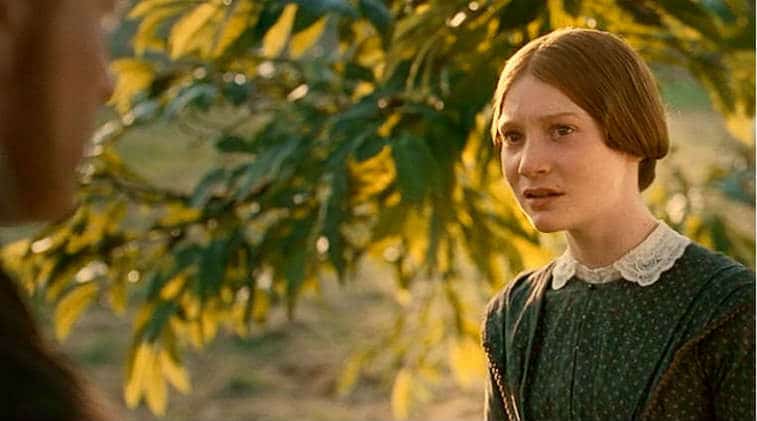 Nearing tears, Jane questions the cruelty of what Edward is asking. “And become nothing to you?… Am I a machine without feelings? Do you think that because I am poor, plain, obscure, and little that I am soulless and heartless? I have as much soul as you and full as much heart. And if God had possessed me with beauty and wealth, I could make it as hard for you to leave me as I to leave you…” Edging closer to him, she continues “I’m not speaking to you through mortal flesh. It is my spirit that addresses your spirit, as it passes through the grave and stood at God’s feet equal. As we are.” 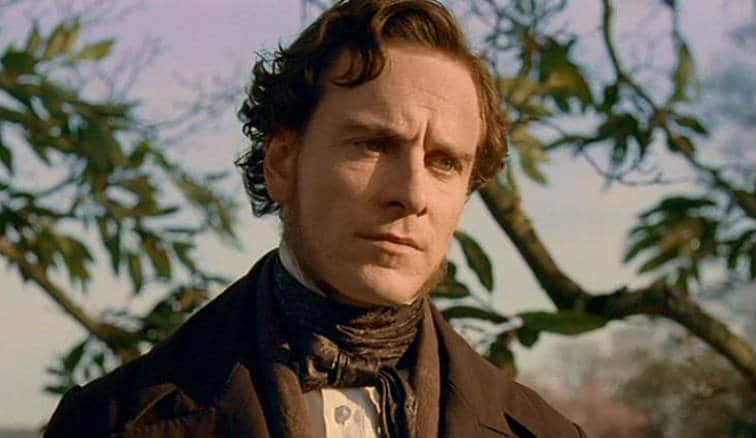 With anguish, Edward keeps silent, standing apart from her during her impassioned speech. Taking her arms, and passionately pulling her towards him, Edward reinforces his hopes, echoing the truth of Jane’s final words and the way he wishes things to remain. “As we are.” 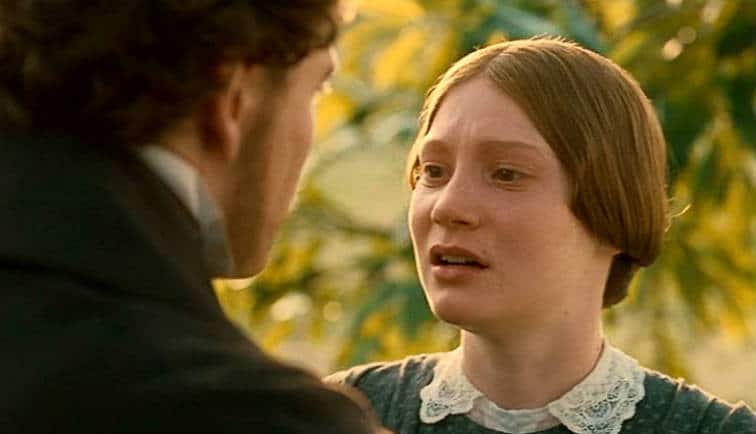 Tugging against his hold, Jane refuses to believe the validity of the words she hears. “I am a free human being with an independent will, which I now exert to leave you.” 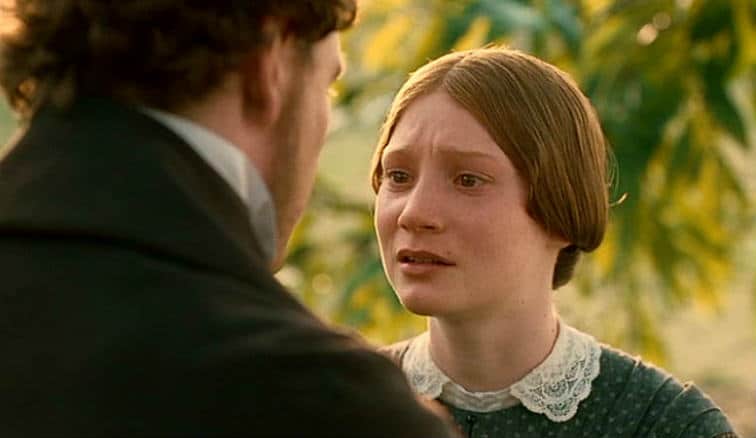 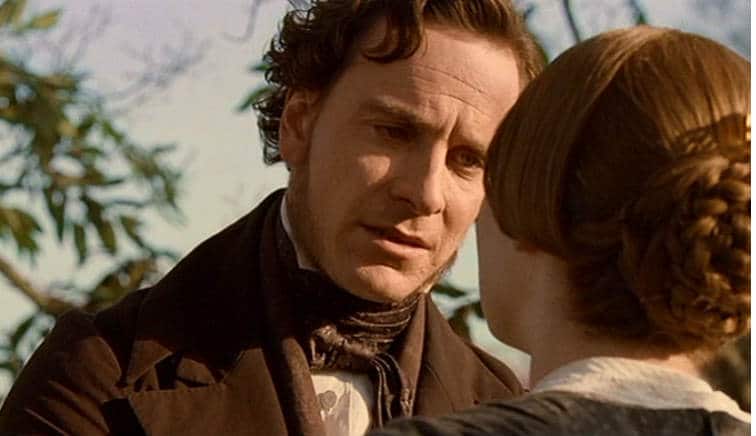 Impassioned, Edward finally puts his desires into words impossible to refute. “Then let your will decide your destiny. I offer you my hand, my heart. Jane, I ask you to pass through life at my side. You are my equal, my likeness… Will you marry me?”

With awe and disbelief clouding her expression, Jane isn’t convinced someone such as her could be fit for a man like Edward Rochester, Jane questions him still. “Are you mocking me?” 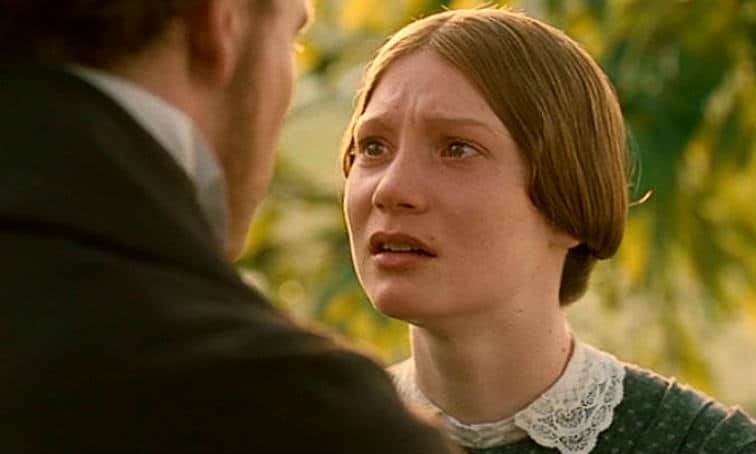 “Entirely,” she replies. She’s still of the opinion that Miss Ingram is to be Edward’s bride.

He sets about refuting this. “Miss Ingram, she is the machine without feelings. It’s you, you rare and unearthly thing. Poor and obscure as you are, please accept me as your husband. I must have you for my own.” 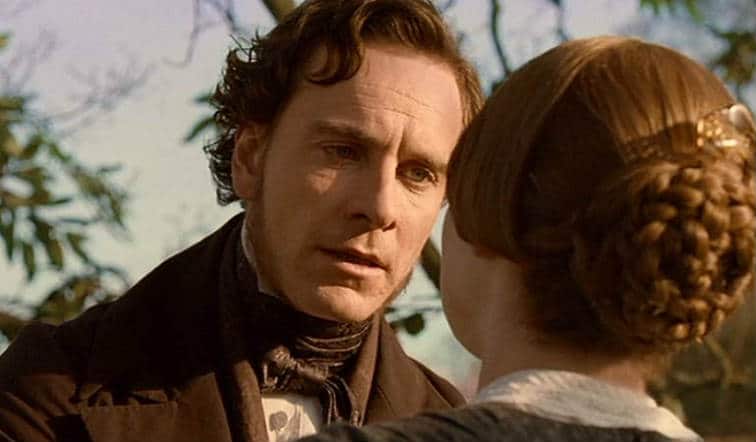 Processing his tender declarations, she asks with a sense of wonder, “You wish me to be your wife?”

“I swear it,” is his sure and quick response.

Breathlessly she asks, “You love me?” 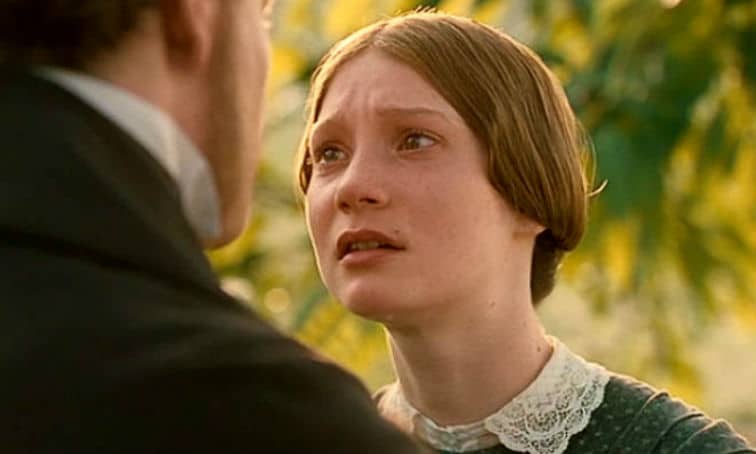 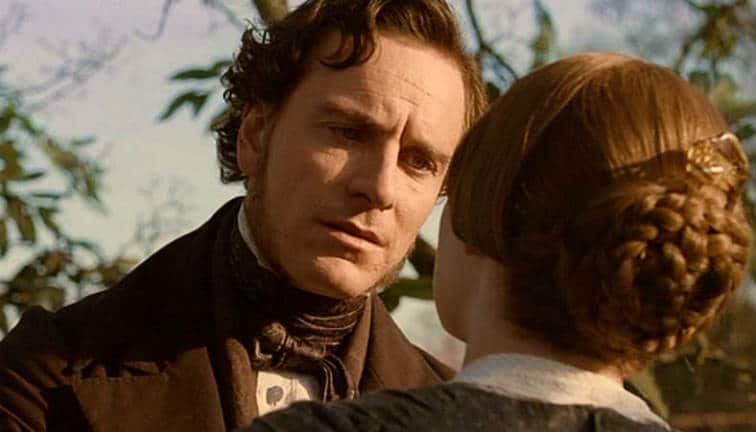 As relief and love flickers across their faces, standing beneath the shelter of the tree, the couple comes together for a kiss. With the breeze blowing gently and a glorious sunset at their backs, distant thunder rumbles forcing the two to make a run for the house. Just as they make it to the steps of Thornfield, a downpour catches them. 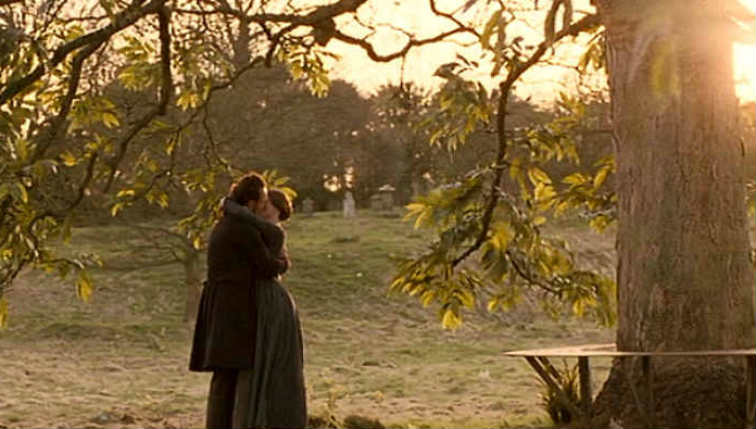 Inside, as Jane runs towards her bedroom, Edward tugs at her arm, bringing her back to him where he lifts her off the ground and kisses her soundly. A rare smile is affixed on Jane’s face as they draw apart. 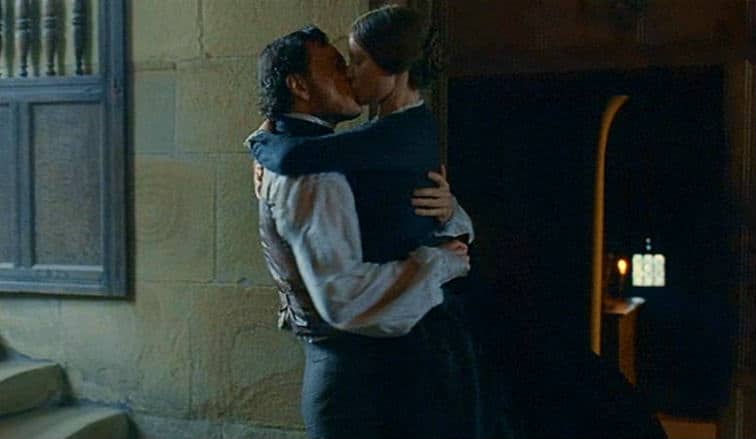 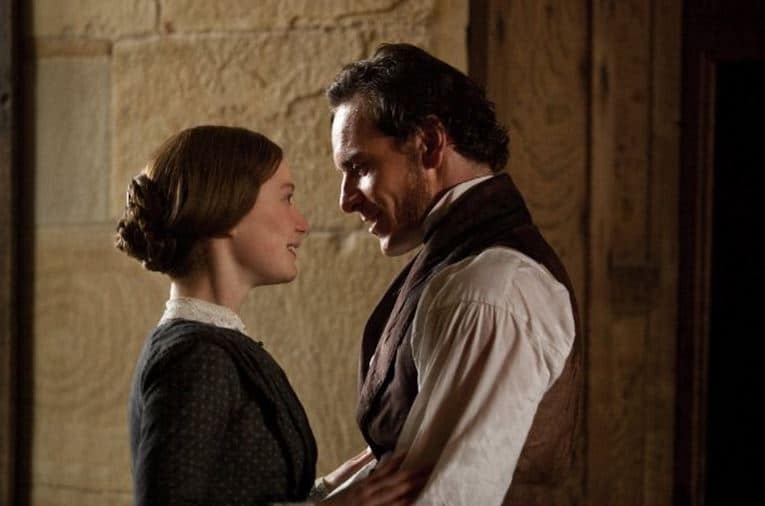 They part with Edward’s words of love and endearment, “Goodnight. Goodnight, my love” hanging in the air, a cloud of Edward’s secrets also lingering nearby…

Have you watched this adaptation of Jane Eyre? What is your opinion of this moment or what’s your favorite romantic scene between Jane Eyre and Mr. Rochester? Comment below! Any and all of your observations about Jane Eyre is welcome.

Our romance-themed entertainment site is on a mission to help you find the best period dramas, romance movies, TV shows, and books. Other topics include Jane Austen, Classic Hollywood, TV Couples, Fairy Tales, Romantic Living, Romanticism, and more. We’re damsels not in distress fighting for the all-new optimistic Romantic Revolution. Join us and subscribe. For more information, see our About, Old-Fashioned Romance 101, Modern Romanticism 101, and Romantic Living 101.
Pin this article to read later! And make sure to follow us on Pinterest.
By Rissi JC on January 16th, 2016