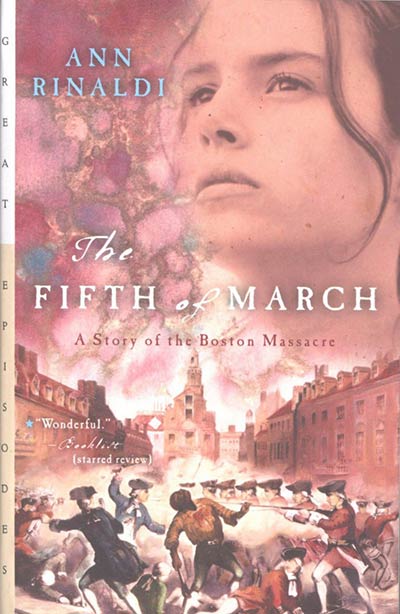 The Fifth of March Book Review

Ann Rinaldi’s The Fifth of March follows fourteen-year-old Rachel Marsh, a servant of John and Abigail Adams in 1770s Boston. Rachel is indentured to the family and cares for the Adams’s children. Her only relative, her Uncle Eb, is a mean-spirited man, whom she despises. He is a merchant in the city who sells furs and fabric to the Tories. Rachel’s parents are both dead, and Rachel has no blood relative but Uncle Eb; who constantly reminds her of this. Rachel’s friend Jane is also a servant for a household in Boston. Jane is much more entrenched in the goings-on of the Revolutionists than Rachel is, and Rachel both envies Jane’s boldness and fears that her friend will get in trouble due to her actions.

The tensions in Boston seem to grow every day, and Rachel is not sure what to make of everything that is happening.

John finds out about Uncle Eb’s request and Rachel admits to him that she did not want to betray the family. She understands their generosity to her, especially given her position as an indentured servant. She is lauded by John and realizes that her decision may come with consequences from her Uncle. Rachel longs for an education, and Abigail sends her to Henry Knox, a local bookseller. Henry opens up Rachel’s world, giving her novels and books on philosophy and politics. They become fast friends, and Rachel admires Henry greatly, knowing she can confide in him.

As British soldiers begin to arrive in the city, one is stationed in front of the Adams’s home. His name is Matthew Kilroy, and Rachel is initially cautious and trepidatious about trusting him. But as they interact, Rachel sees that Matthew is not that much older than she is and that he is tired and hungry. Taking pity on Matthew, Rachel secretly begins to bring him food, much to the disdain of the other servants and Abigail Adams. Abigail and John both warn Rachel about what she is doing, but it is too late.

Rachel and Matthew become friends, even as they stand on opposite side of the American and British loyalty line.

Their friendship evolves into a slow courtship, and as the people of Boston become more and more enraged at the British and the soldiers taking up space in the city, Rachel can see Matthew’s anger as well. Confused both by her burgeoning feelings for Matthew and her decisions about her American loyalty, Rachel keeps Matthew at bay. He is frustrated by Rachel’s actions, but cannot dissuade her from feeling different. They quarrel, and Rachel is left even more confused. Rachel tries to discuss her feelings about Matthew with Jane, but Jane is wrapped up with the Patriots and their ideas about how to drive the British out.

The citizens of Boston are riled up, and after a riot in the North End, resulting in the death of one of Rachel and Jane’s friends, it seems as if the entire world is calling out for violence. Men like Crispus Attucks and Sam Adams are speaking out to the people, urging them to not back down from the British. One night, Jane persuades Rachel to go out with her; the girls know something is happening that will change their lives forever.

As the girls sneak to the Custom House, Rachel sees Matthew in the crowd of people, and shots are fired, becoming what will be remembered as the Boston Massacre.

In The Fifth of March, Rinaldi gives Rachel a strong voice and allows her protagonist to question where her loyalties lie. I appreciated this, as far too often with similar narratives, the protagonist is staunchly American; no qualms about it. This portrayal seems much more realistic. As Rachel sees what is happening around her, she takes it all in and must decide where she fits into the events. The historical accuracy of the narrative is excellent and will intrigue readers looking into the events of the Boston Massacre for the first time, or readers familiar with the events and seeking a fictional narrative.

Rachel and Matthew’s romance is sprinkled into the text enough so that it doesn’t overwhelm the main plot of the Massacre. The characters are a good juxtaposition for two teenagers thrust in a violent world that doesn’t always present itself in a straightforward manner. The overall pace of the book is a bit slow in the scenes where the action is not taking place, but there is more than enough within the pages to keep the readers interested in moving forward.

The Fifth of March would be a great television mini-series, with a similar feel to the Sons of Liberty series produced by the History Channel. For casting, I’d place Willa Holland (TV’s Arrow and Gossip Girl) as Rachel. She can play a strong lead but also can bring Rachel’s conflicted quality to the character. For Matthew, I’d cast George MacKay (Hulu’s 11.22.63). He’d be able to show Matthew’s frustration with the war and his quieter side with Rachel.

Who would you cast in The Fifth of March? Sound off below…