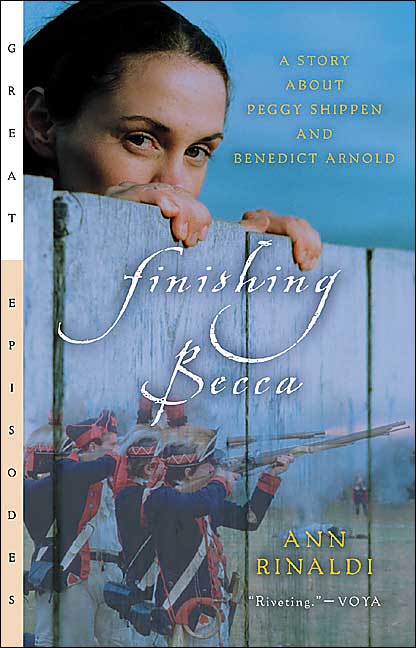 Finishing Becca begins in 1778, and Becca Syng is growing up in Philadelphia in the shadow of the American Revolution. Her beloved brother Blair is fighting in the American army, and she and her mother, Jane, are worn down with trying to make ends meet. Becca’s stepfather, Henry Job, is unsympathetic to the plight of the Patriots and runs food and supplies for anyone who will pay. But Jane wishes for more than simple farm life for Becca and secures Becca a position as a maidservant to a girl in the city, Peggy Shippen.

Jane’s loyalties to the Americans waver, even as her own son serves in the army, though Becca’s do not, which causes some tension between mother and daughter.

The Shippens’ lives are so far removed from Becca’s that she wonders if she’ll be able to fit the role to Peggy. Becca remarks that her mother long-harbors desire for their old, richer life. That is, the life they had when Becca’s father was still alive and before the war. With Jane’s urging, Becca takes the position, knowing she will have a new sort of education, with lessons on how to draw, dance, and speak French, and have a way to be “finished”; to be more in tune with society than she would if she stays at the farm.

Though the Shippens claim to be Quakers, in Becca’s mind, they are anything but. Peggy is terribly spoiled, the darling of Philadelphia high society. From day one, Becca witnesses Peggy asking her father for money, for new gowns, a conversation that seems to take place several times weekly. Peggy does not understand the idea of no and wears her father down.

Becca is astonished at Peggy’s behavior, and realizes that being a maid to Peggy may prove to be more difficult than she realizes.

Becca manages to gain some ground when she agrees to get Jane to dye Peggy’s new petticoat yellow, and negotiates terms so that she won’t be taken advantage of by Peggy.

Peggy has a gentleman caller, Captain John Andre, and as Peggy’s father attempts to keep neutral loyalties, with a British soldier visiting, it is complicated to save face. Peggy does not care, as long as the Captain continues to call. Peggy’s world revolves around parties and gatherings, worlds apart from Becca’s former life. Becca feels torn, for she longs for the richness that seems to come so easily for Peggy, and yet she becomes increasingly troubled about Peggy’s complete lack of caring about the situation around her.

Becca finds some sympathy with the other servants, especially as Peggy’s behavior becomes more and more erratic. Peggy’s older sister, Sarah, goes on runs for the Americans and makes no secret of her loyalties to the Patriots. She enlists Becca to help her sneak a Lieutenant out of the city to get him back to the army at Valley Forge. Becca agrees, and when she sees the Lieutenant, Persifor Frazor, who is ill, but compelled to go back to his men, she feels guilty for her thoughts of wanting more than she has — for wanting Peggy’s life.

Becca searches for what she calls her “missing pieces,” finding them in the lessons she has in the Shippen household, along with stories of her father that she is able to hear in the shops and from the people in the city.

Becca’s father, Phillip, was a silversmith, and Becca’s keep the stories and thoughts of her father close to her heart. The intrigues she is privy to as Peggy’s maid show her a bit of the life her mother Jane, once had.

As the violence of the war starts to seep into Becca’s life, she sees how dangerous things are becoming for people like the Shippens who haven’t chosen a side, or those who sided with the Loyalists. The British are starting to be driven out of the city, John Andre among them, and the socialites, including Peggy, decide to throw a going-away party. But Peggy’s father refuses to let his daughters go, and Peggy throws the tantrum of a lifetime. Becca and Peggy watch as the Loyalists leave, and as a new chapter begins in both of the girls’ lives, an American General named Benedict Arnold comes to the city, and their lives are changed forever.

Becca’s voice makes this narrative of historical fiction interesting, and Ann Rinaldi brings the details of the American Revolution to life. Unfortunately, some of the secondary characters in Finishing Becca are little more than caricatures, which can be distracting at times.

The scenes between Becca and Peggy are a good juxtaposition for a commentary on social class during this time period.

There is romance between Peggy and John Andre, and later, Benedict Arnold, which might inspire readers to go look up the real story of these historical figures. Becca has a minor romantic storyline, but I won’t reveal with which character!

ADAPTATION RECOMMENDATION
Finishing Becca would look great on the big screen, with a director like Jane Campion (Bright Star) or Julian Jerrold (Becoming Jane) at the helm. Since this story is mostly quiet, with the violence of the war — very brief — happening off the page, and not in the main narrative, the focus is on the character interactions and evolving relationships, more so than on battle scenes.

For casting, I’d place Dove Cameron (Descendants, Liv and Maddie) as Peggy. She’d be able to pull off Peggy’s spoiled side, and would be able to play sweet too! For Becca, I’d cast Taissa Farmiga (American Horror Story, The Bling Ring), who has shown that she can play innocent, but also smart and clever, and she’d be able to bring to life Becca’s conflicted feelings about the war.

Will you be reading Finishing Becca? Sound off below…

Our romance-themed entertainment site is on a mission to help you find the best period dramas, romance movies, TV shows, and books. Other topics include Jane Austen, Classic Hollywood, TV Couples, Fairy Tales, Romantic Living, Romanticism, and more. We’re damsels not in distress fighting for the all-new optimistic Romantic Revolution. Join us and subscribe. For more information, see our About, Old-Fashioned Romance 101, Modern Romanticism 101, and Romantic Living 101.
Pin this article to read later! And make sure to follow us on Pinterest.
By Clarissa Hadge on February 20th, 2016