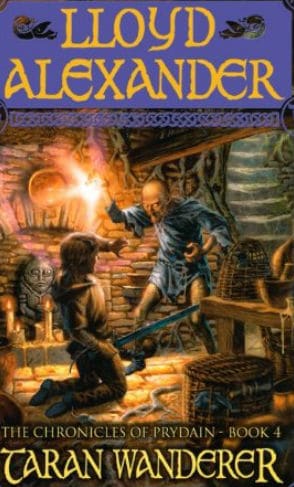 Taran Wanderer is the fourth book in The Prydain Chronicles by Lloyd Alexander, falling between The Castle of Llyr and The High King. The series is made up of five books that were published between 1964 and 1968. There is also a collection of short stories (The Foundling and Other Tales) that was published in 1973. The books in The Prydain Chronicles are, in order: The Book of Three, The Black Cauldron, The Castle of Llyr. Taran Wanderer, and The High King.

RELATED: VINTAGE YA BOOK REVIEW: THE CASTLE OF LLYR

I was trying to figure out why this is, and I think it’s because Taran Wanderer is about one young adult’s quest to find out who he is, something relatable (and very well written). The fact that Taran’s quest is much more personal in this book also plays a role. Sure, he runs into Fflewddur and Doli, Gurgi goes with him, and Eilonwy is on his mind, but the story is just Taran’s in a way we haven’t seen before in the series.

In this book, Taran sets off with Gurgi to find out where he has come from, to learn if he has anything that he can offer a certain feisty princess, and to discover who he is. On the way, he meets a wide array of characters who help him (both intentionally and unintentionally). He also is able to use the skills he learned in the last few books in a variety of ways, and further grow into the man he will become by, I presume, the end of the series.

If the other books were about Taran learning about the pangs of leadership and that growing up is hard, this book is more about him both discovering and embracing who he is. Does his worth change if he’s the son of a shepherd, a king, or an orphan? Is it where he comes from, or what he chooses to do with his life that matters? He learns both who and what he wants to be and who and what he does not want to be during the book and takes us along for the ride. 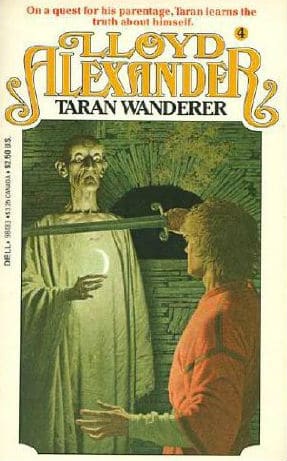 There are some supernatural elements in Taran Wanderer; a confrontation with the wizard Morda answers many questions I had about the other books in the series, a visit to the marshes of Morva provide a starting point for Taran’s quest, and we learn the effects of evil on the common folk of Prydain, but Taran Wanderer is more a story about regular people and one person in particular. It’s very effective and shows us even more of the land of Prydain than we’ve seen before.

As Taran and Gurgi travel and learn, I remember as a kid learning the same lessons. Life is  a forge, a loom, and a potter’s wheel; being shaped and tempered and tested makes us stronger, our lives are woven together with the lives of others into a pattern that very few can see, and that we each shape our lives, like clay on a wheel.

The lessons that Taran learns, shared through the learning of several different trades, only adds to the overall tone of the story, even more of a coming of age story than the others. Really, the whole series is a coming of age story, but this one feels the most like it.

Alexander paints a beautiful picture of the land of Prydain (and when a series of films is made, I hope his estate is very involved to make sure the film captures the poetry of his language). I love the way this man writes; this book in particular captures that balance between an otherworldly quality and creating characters that the reader can relate to (none of whom have any actual magical abilities).

I put the romance rating a little higher in Taran Wanderer, if only because a major driving force behind Taran’s quest in the first place is wanting to prove himself to be worthy of the love of Princess Eilonwy. She is absent from this book, sadly, though we learn that she is unhappy learning how to be a “proper princess” on the island of Mona, and that she misses Taran.

I know the series is about Taran, not Eilonwy, but I would love to read a short story about her life on Mona. We know she is missing her friends quite a bit, and I imagine it would be very entertaining to read about her time at court. Throughout this book, however, Taran is always thinking of her, and how his actions and heritage might change their possible future together. This is also the first time he admits that he loves her, so that’s a great moment.

Honestly, I shipped Taran and Eilonwy before I even knew what shipping was.

Like The Castle of Llyr, Taran Wanderer is a little darker in tone than the earlier books, which is appropriate as the characters are all older now, and wrestling with new challenges. Even though it can technically stand on its own, I would still recommend reading Taran Wanderer fourth, as Lloyd Alexander intended it. If you like coming of age stories with a dash of romance, a hint of magic, and a hearty helping of self-discovery, you’ll probably love Taran Wanderer.

Again, as I’ve said for every other review of the other books in this series: I really love the Disney animated film The Black Cauldron, but it’s not the film adaptation that these books deserve. I don’t know who is directing the live-action remake over at Disney, but I hope they’re paying attention to me! Oh, who am I kidding, of course, they are. Is book slapper a job? Because I would be great at that. Anyway, I still think a series of movies would work well, and making each book a film would allow for the budget needed for all the special effects necessary to tell the story.

Casting-wise, I have the main people: Taran as Thomas Brodie-Sangster, Dallben as Michael Caine, Coll as Patrick Stewart, Sean Bean as Smoit, Achren as Emilia Clarke, Gurgi as voiced by Matthew Perry, and Ordu, Orwen, and Orgoch voiced by Judi Dench, Maggie Smith, and Betty White. Also, Eilonwy is Sophie Turner, and Gwydion is Ben Barnes (neither of them are in this, but I feel like they both could easily be in memories, so I’m mentioning them again).

Then, I think I have picked my Fflewddur-Matthew Gray Gubler. He’s 10 years older than my Taran, and I think he could pull off what I see as the essence of Fflewddur, caring but scared, wise and willing to compromise. Plus, he’s tall and lanky. Doli, I keep coming back to the voice of Jim Beaver, who played Bobby Singer in Supernatural and Mr. Darling in The New Adventures of Peter and Wendy. I think that he has the right build for Doli if they decide to just shoot him like the hobbits in The Lord of the Rings, and he can do the “grumpy yet caring” voice very well.

Other new characters include Morda, who I would love to see Benedict Cumberbatch play; with Henry Cavill as the Smith, Emma Thompson as the Weaver, David Tennant as Craddoc, with Annlaw as played by Nathan Fillion, This particular story is filled with lots of characters, Dorath, Goryon, Gast, and the rest of the citizens of the Free Commots, so there are lots of jobs available here!

We only have one book left to cast, do you disagree with any of my choices? Who did you always imagine bringing these characters to life?

Who would you cast? Have you read Taran Wanderer? Let me know what you think in the comments!

Our romance-themed entertainment site is on a mission to help you find the best period dramas, romance movies, TV shows, and books. Other topics include Jane Austen, Classic Hollywood, TV Couples, Fairy Tales, Romantic Living, Romanticism, and more. We’re damsels not in distress fighting for the all-new optimistic Romantic Revolution. Join us and subscribe. For more information, see our About, Old-Fashioned Romance 101, Modern Romanticism 101, and Romantic Living 101.
Pin this article to read later! And make sure to follow us on Pinterest.
By Bailey Cavender on May 3rd, 2016